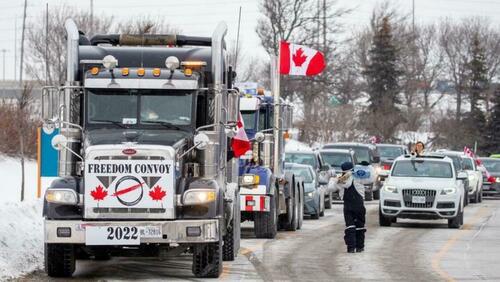 As Rebel News Editor-in-Chief Ezra Levant reported in a tweet, GoFundMe has decided to take – or some might say steal – the roughly CAD$9 million that was supposed to be used to pay for supplies like gas, food and other necessities for the truckers and instead dole that money out to charities of the company’s choosing, unless donors fill out a request form.

Why the company has decided on this policy, instead of instating automatic refunds for donors, isn’t clear. But as Levant joked, “what a windfall” for Black Lives Matter, Greenpeace and Planned Parenthood.”

At the request of Trudeau, @GoFundMe has just stolen $9,000,000 from the truckers. Rather than automatically refunding it to the donors, they say they’re going to give it to groups of their own choosing. What a windfall for Black Lives Matter, Greenpeace and Planned Parenthood! pic.twitter.com/prEwLnypfe

GoFundMe claimed that the fundraiser is in violation of “Term 8” of its terms of service clause, and also explained that it often works with local authorities to “make sure we have a detailed understanding…of facts on the ground.”

The decision was made in order to ensure GoFundMe “remains a trusted platform”.

Others wondered how any of this is legal.

How is this legal? https://t.co/2O3sKAOZmL

The Ottawa police, meanwhile, insist that demonstrators in the city are acting “unlawfully”. Several have been arrested (mostly for charges that may seem serious but actually aren’t) for making threatening statements on social media and for other issues.

Ottawa Police have also warned that they will be collecting as much digital and financial information as they can from both the truckers and anybody who donates to support them. In a threatening statement, the police implied that supporters of the Freedom Convoy could face prosecution just for donating.

Enhanced intelligence operations and investigations: National, provincial and local intelligence agencies have increased efforts to identify and target protestors who are funding/supporting/enabling unlawful and harmful activity by protestors. /11

At this point, there’s really nothing else for users to do but request their refund (so that GoFundMe doesn’t simply take their money) and never donate to another fundraiser on the platform again.

Readers can find the link below:

Here is the link for where you can request your full refund from GoFundMehttps://t.co/Cs5qbRIHzz

After all, there are plenty other crowdraising platforms out there.