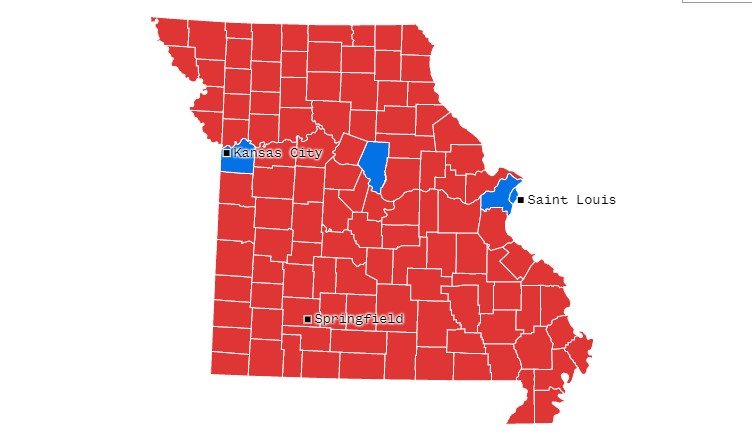 The RINO movement has spread from DC to states now and America is in trouble. There is no such thing as voting straight conservative now because most Republicans are now liberals in conservative garb. What a mess!

Up until my wife kicked me out 7 months ago I was a proud Missourian. You have no idea how badly it bothers me to see this story hitting the news cycles. Missouri, a red state, has sold out for a few pieces of silver. These state lawmakers belong in DC with the rest of the whackos.

Take it away Jim… From The Gateway Pundit:

But this is all a joke because the state House and State Senate if filled with RINOs and Democrats pretending to be Republicans.

The Missouri Senate is folding on redistricting to Democrats.

And now the word is out the Missouri Republicans are going to destroy the state by passing ranked-choice voting that ensures Democrats win out in all future elections.

These fake Republicans in Missouri are the absolute worst!

In January, we reported that RINO governor Mike Parson was pushing “ranked choice” voting in the state to help Democrats.

Now we have word that Republicans in the assembly are pushing legislation that bakes in the questionable procedure in the state.
Why would they do this?
MONEY.

This morning we confirmed that this is actually taking place in Missouri.

I am a Missouri resident & have information on a large scale election rigging plot from an inside source at the State Capitol which desperately needs to be reported on. I know you are aware that some Missouri Republicans are currently endorsing ranked choice voting in the state, which would allow Democrats to take over, however I do not believe you are aware of the full extent of what is secretly going on here behind the scenes and the highly planned & coordinated joint effort between many state Democrats & Republicans to rig & dismantle Missouri elections before 2024 because you have not been reporting on some major info that is VERY critical to get out to all Missouri voters. Therefore, I am sharing with you this lengthy inside info that was told to me by a confidential source personally known to me for many years who is within the Republican Leadership’s orbit. I strongly urge you to fully investigate it yourself & get the word out so that it can be stopped.

In addition to promoting ranked choice, the Republican controlled House also just passed legislation requiring 2/3 voter approval that will make it impossible to repeal ranked choice once implemented in order to prevent voters from undoing the election rigging & cement the anti-Trump establishment in power forever. Both of these will be on the ballot in tandem in 2022 & will be effective by 2024. They were originally planned to be in separate ballot years so as not to.raise alarms, however the threat of Trump rerunning has forced them to move quickly all at once. As plan B, they passed this through the House while everyone was distracted with the messy redistricting fight. The immediate intent is to keep Trump from winning reelection, but also to prevent conservatives from ever winning office & there is a concerted plan between Democrats & “Republicans” to get this done. The 6-2 redistricting map they are fighting for was actually wholly designed to be used under a ranked choice voting scheme & the districts are drawn in such a way that they will be able to successfully fracture conservative strongholds by deploying multiple primary candidates as sandbaggers & making fudged numbers more believable.

Unfortunately, an overwhelming majority of Republican voters in this state have been lulled into a false sense of security about our state elections since we have GOP super-majorities. Those in the legislature are fully aware of this & intend to use it to their advantage. The focus here has entirely been on election meddling in other states, while it is actually being sneaked in here under the radar right now. The Dem/Rep coordinated rollout plan will be for Republicans to campaign heavily in favor of these ballot initiatives because they know that Missourians currently have a high (and very undeserved!!) trust in their Republican representatives. The preplanned & FALSE narrative they will employ for the ranked choice is that it will supposedly elevate anti-establishment candidates to better allow pro-liberty populist control. The narrative for the amendment change issue will be to disingenuously spin anti-establishment Trump borrowed talking points of Soros money & the media affecting our State Constitution & putting us at risk of a leftwing takeover. They will repeatedly hammer the need to “protect our state & our midwest farmers” from outside meddling. For their part, the Democrat plan is to very weakly pushback on this by citing some Democrat favored outcomes of past initiatives in order to keep up an appearance that it will benefit Republican voters. However, they have agreed in advance that they will not pushback forcefully in order to facilitate easy Republican passage of the tandem vote corrupting scheme ballot initiatives.

Furthermore, many of the Republican individuals participating in this deceitful plot for election takeover were brought in after Trump’s win in 2016 with the expressed purpose of aiding Democrats in thwarting the rightwing trajectory of the state & to return control to Democrat hands! Many are, in fact, actual diehard Democrats sandbagging the opposition party. Others involved in this are typical RINO establishment actors with no idealogical compass, just a desire for elitism & power. I have to be very careful about what I say because I cannot reveal my source, but I can give you helpful tips of areas for you to investigate yourself to authenticate what I am saying:

#1 Look at who came into MO politics on the Republican side post-Trump without lengthy histories. Typically MO officials start in smaller positions & rotate through different offices due to term limits & most are career political actors. Look who just appeared in the last 6 years, both in elected positions & in staff.

#2 Look at the areas that should be strongest for Democrats to compete in, like the large suburban areas, & then compare that to the actual performance & effort of Democrats in those areas over the last election cycles. Take notice of the districts where Democrats should have been competetive, but put in minimal to no effort, or even actively sabotaged themselves. Then look at who is in that seat now.

#3 Look at the proposed redistricting maps that were less than 7-1. Notice which strongly red areas were fractured without any apparent benefit. That was intentional. Those are the seats the establishment plans to steal via ranked choice mucking of the vote tallies & the candidates in them are loyal conservatives. Look at who worked the hardest on drawing those lines to fracture areas that logically should be together in the same districts.

#3 Look at the full history of Eric Greitens & which establishment individuals were involved in sabotaging & attacking him behind the scenes, both while in office & even after he left. These are the same secret anti-Trump elitist individuals working on this election hijacking plan & they hate Gretiens for the same reasons the hate Trump.

#4 REALLY look hard at the individuals responsible for the ranked choice ballot initiative. Because it would raise too.much suspicion to introduce that measure in the legislature like they did with the Constitutional amendment process change, seemingly outside people were brought in to make it appear like a grassroots effort. Many of those people actually have ties to offices within the State Capitol.

#5 Look at all the social media & public statements from administrative positions within the offices of Republican leadership. Take special note of certain people using typically leftwing rhetoric. Sometimes the mask slips & they sound just like AOC. The map fight has caused a few of them to drop their mask in anger. Those people sound like smug, diehard Democrats because they are.

I know this was very lengthy & I apologize that it was, unfortunately, cryptic. Like I said, the source I have inside the Capitol is a very close personal friend & I do not wish to compromise them by repeating anything in a way that could be identified back to them. I hope you are at least willing to investigate the things I’ve relayed to you & then decide for yourself if you find worthy of reporting. At the very least, it’s imperative you sound the alarms about the 2 absolutely catastrophic ballot issues appearing in tandem this year which together would forever dismantle our free & fair elections & please encourage Missourians to vote NO on both!

This is a travesty.
Republicans need to immediately explain this.

What in hades is going on here?

I’m away for 7 months and the whole state is falling apart.

This is a huge development and may trigger other red states to follow suit.

What is your definition of “fair and free elections” Missouri GOP? 30 pieces of silver may be nice now but in time it will be worth nothing with Democrats running the show.

Be very afraid, because the maelstrom will envelop your red state as well. First they came for the Missourians and I did not care because I was not a Missourian…

Today starts phase two of my return to the fight folks. I sure could use your help. -Dean