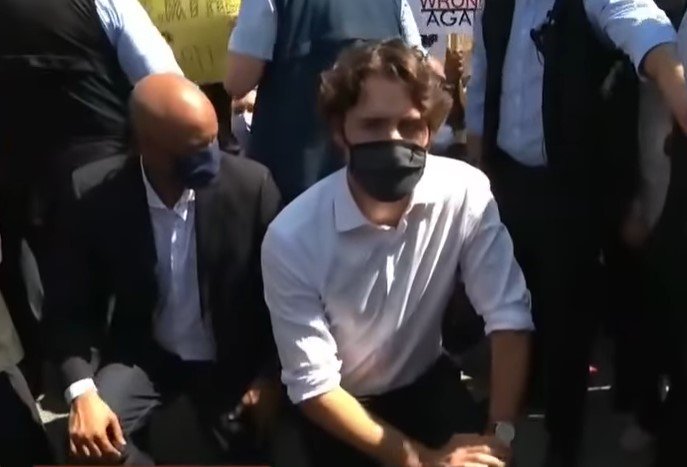 Sorry bad joke but rumors are rampant about the Canadian PM being Fidel’s son:

To imply that Kevin Trudeau’s mom had sex with Fidel Castro is gross and I just ate, so let’s switch to a more pertinent topic.

Here’s proof that Kevin might be an apple that didn’t fall far from the tree.

You don’t mess with a man’s dog you dumb Cannuck.

Priorities.
These leftists always reveal themselves.

Back in June 2020 Canadian Prime Minister Justin Trudeau attended a Black Lives Matter rally. During his appearance, he was asked to take a knee. He immediately obeyed.

Justin Trudeau also donated several times to the BLM cause.
Via Rebel News.

The BLM mobs caused a record $2 billion in damages in 2020 and was behind several killings.

In Minneapolis alone, Black Lives Matter mobs damaged or destroyed over 1,500 businesses or buildings in the 2020 riots.

Over 700 police officers were injured in the BLM riots — and that was back in June 2020!

But forget that, on Thursday the Trudeau regime announced they will start confiscating the bank accounts and pets of any truckers they arrest.

I believe he’s Canadian. Do you?

What the Sam Hill is going on here?

Finally we have a group stand tall against things like forced vaccinations and in come the Montreal Mounted Marxists to shut them down.

Trudeau has been consistent…

…maybe he is Castro’s son.

Buy that marxist a cigar. He is destroying Canada faster than papa could have ever imagined.

Reproduction can have severe consequences.

I’ve missed you all and…Today starts phase two of my return to the fight. I sure could use your help. -Dean