Many of you might remember from years ago, the controversy swirling around Barack Hussein Obama’s citizenship status that brought into question his eligibility to have ever been able to run for office of president of the United States. The man was an enigma of sorts with his sudden appearance on the national political stage given his former relative obscurity straight from the political cesspool of Chicago. In nine years, since beginning his political career as an Illinois state senator from 1997 to 2004 and then as a U.S. senator from 2005 until 2008, Obama had assembled an unimpressive resume scant on any legislative accomplishments necessary to qualify him running for the highest office of our land. In fact, the only qualifier that seemed to matter to the Left as it pertained to this former attorney/community organizer turned politician was the emphasis placed on his being black. 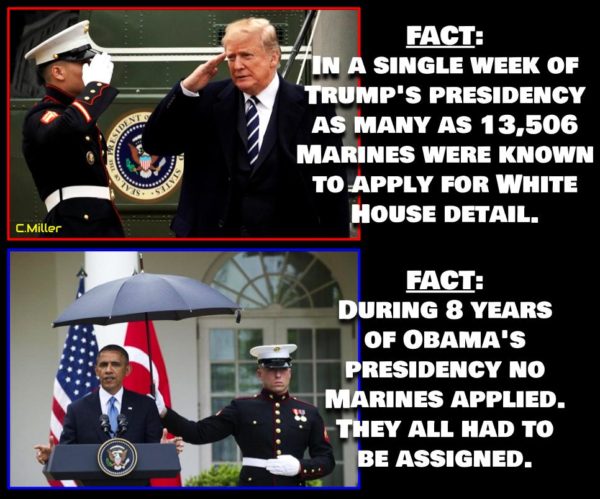 However, in Obama’s seemingly overnight meteoric rise from zero to hero following his decision to run for the office of president, reasonable questions began being asked that were either met with no reasonable answers or just outright scorn, ridicule and hostility. As can be expected by those on the Left, accusations of racism were the standard go-to defense against any who dared question the credibility of Obama’s credentials, or rather his lack thereof. Yet despite the Left’s surly attempts to discredit the substance of any questions that challenged Obama’s legitimacy, still they continued to persist in the minds of millions of Americans. Both then and still to this day. From Obama’s sealed academic records and his disturbing infatuation with Islam to the prevailing question of Obama’s true place of birth which had become front and center. 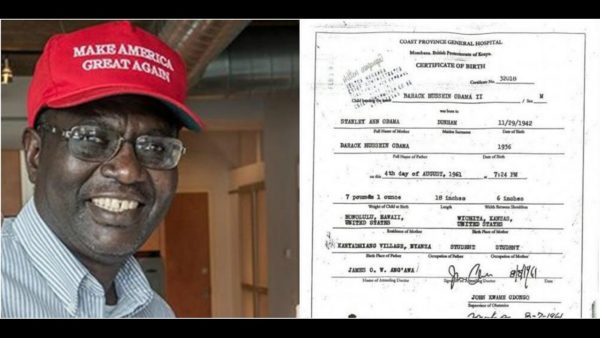 Previously, in 2017, Obama’s half-brother Malik Obama came forward with a birth certificate he alleges to be the former-presidents, showing that Barack Obama’s place of birth was in fact Mombasa, Kenya. Not Hawaii as the former-president had previously asserted, but this particular belief was nothing new however. Yet despite this birth certificate having supposedly been debunked as a forgery (of course), that hasn’t prevented Obama’s Kenyan grandmother, Sarah Hussein Obama, from declaring she was present at Obama’s birth there in the East African nation.

Recently however, an older, more intelligible video has resurfaced, reaffirming the assertion that Barack Obama was in fact born in Kenya. This doesn’t come from any third person source, but from Obama himself and in his own words. 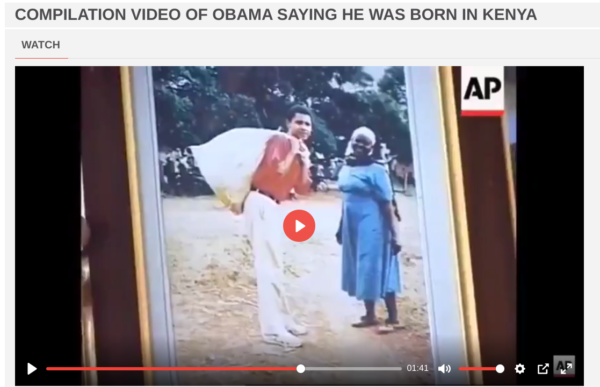 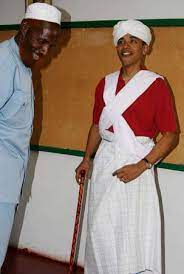 Yet further back, as the debate over Obama’s precise place of birth was gaining momentum, the insistence for Obama to release his birth certificate soon began. The most prominent voice in this birther movement, as it came to be called by the Democrat Party’s Pravda media, became that of none other than Donald Trump himself. Despite the fact the birther movement actually had its origins during Hillary Clinton’s 2008 presidential campaign, when one of Clinton’s top aides allegedly was attempting to spread the rumor that then-Senator Barack Obama (and Clinton’s main rival in seeking the 2008 Democratic presidential nomination), was not a natural born citizen. The following excerpt from a September 20th, 2016 Breitbart article goes on to elaborate:

Larry Johnson, operator of the NoQuarter blog, described his cooperation with the aide, Sidney Blumenthal in September 2015. I know firsthand, and can testify under oath, that Hillary Clinton’s 2008 campaign was hot and heavy on the issue of Barack Obama’s muslim heritage. How do I know? Because I was a conduit for information from Sidney Blumenthal, a Hillary Clinton confidant. I was not an official part of the campaign. I was not on the staff. But I was a supporter and I have no regrets for trying to help Hillary defeat Barack Obama. I did not knowingly make up or manufacture anything about Barack Obama. Just tried to get the facts out.

Another source confirming Clinton’s quest to derail Obama’s presidential aspirations, came from Clinton’s own campaign manager as related in a September 16th, 2016 Breitbart article that predated the previous article mentioned above by 4 days:

Patti Solis Doyle, who was Hillary Clinton’s campaign manager in 2008 until the Iowa caucuses, admitted on Friday that a Clinton campaign staffer had, in fact, circulated the Birther conspiracy theory that Barack Obama was born outside the U.S. and therefore potentially ineligible to serve in the presidency. 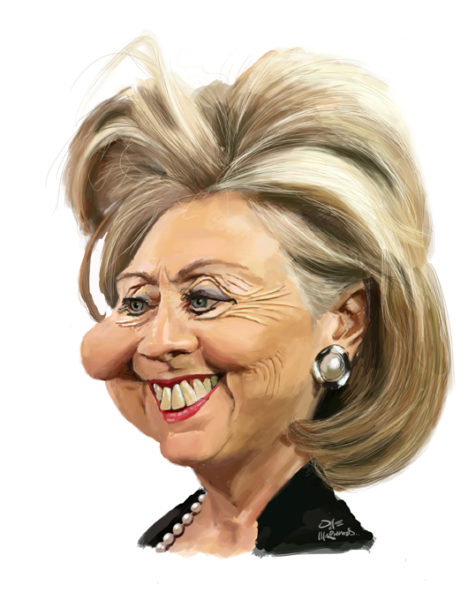 I even recall seeing for myself years ago as I followed the happenings of the 2008 presidential campaigns, a video where Hillary had expressed concern to reporters that Obama may not be a natural born citizen, but not surprisingly, that video has since been made vanished without a trace. But long story short, eventually the Obama White House finally buckled under the mounting pressure (with Trump’s resolute persistence being credited for contributing to much of that pressure) and released Obama’s long-form birth certificate. A certificate that quickly came under the close scrutiny and examination of then-Sheriff Joe Arpaio of Maricopa county, Arizona. Under the direction of Americas toughest Sheriff, an exhaustive 5 year investigation soon commenced towards determining the authenticity of the released document. Naturally this lit a fire under the asses of the Left-Wingnut media as they commenced unleashing a partisan fusillade in retaliation against the good Sheriff and his team of researchers. In paint by number fashion, smearing and attempted character assassinations quickly ensued as the corporate media Swamptroopers brought the full power of the press to bear against Obama’s perceived antagonists.

But Sheriff Joe and his group were undeterred in their mission by the hostile press and their journalistic blitzkrieg and eventually, after 5 years of comprehensive research and painstaking investigations, Sheriff Joe and his posse had made their final determination as described in the following headline and excerpt from a December 15th, 2015 article at foxnews.com:

PHOENIX – Investigators for an Arizona sheriff’s volunteer posse have declared that President Barack Obama’s birth certificate is definitely fraudulent. Members of Maricopa County Sheriff Joe Arpaio’s posse said in March that there was probable cause that Obama’s long-form birth certificate released by the White House in April 2011 was a computer-generated forgery. Now, Arpaio says investigators are positive it’s fraudulent.

But here we are now, just over 5 years since this pretender left office after 8 years of the most lawless, scandal plagued, racially divisive presidency and administration in American history. In a 60 Minutes interview that aired on January 15th, 2017, as the final days of his second and final term were winding down, Obama made the stunning claim that, “I’m proud of the fact that, with two weeks to go, we’re probably the first administration in modern history that hasn’t had a major scandal in the White House.”  If you just read that quote and blurted out, “BULLSHIT!“, you wouldn’t be wrong in your cursory assessment. This political anomaly had scandals coming out the wazoo of his presidency and thanks to Obama’s contaminating influence during his time in office, we’re still dealing with the calamitous consequences of this treacherous malefactor having deliberately sown the seeds of racial division, civil unrest, and social upheaval. 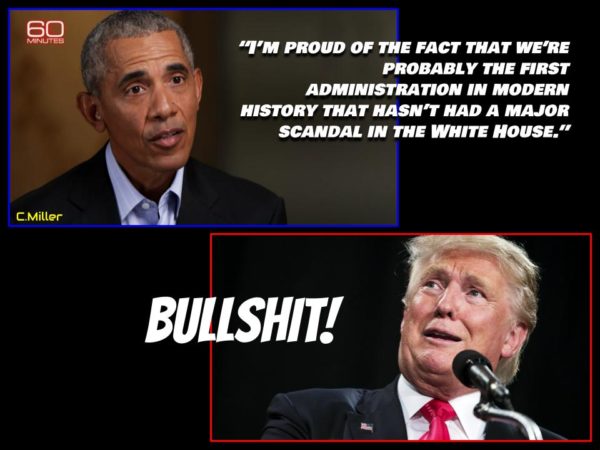 Or put another way, if Obama’s influence were a form of virulent cancer, a proficient Oncologist would correctly diagnose our nation as having reached stage 3 Obama cancer at this point in time.

So in closing, allow me to leave you with the following heritage.org article link dated January 16th, 2017, listing just a few of the scandals Obama’s so proud his administration didn’t have…

Obama’s ‘Scandal-Free Administration’ Is a Myth

You often hear that the Obama administration, whatever its other failings, has been “scandal-free.” Valerie Jarrett, the president’s closest adviser, has said he “prides himself on the fact that his administration hasn’t had a scandal and he hasn’t done something to embarrass himself.” In reality, Mr. Obama has presided over some of the worst scandals of any president in recent decades.

President Obama and his mouthpieces have embarked on a bizarre scheme to hypnotize America into forgetting the many scandals of his presidency. They seem to think that intoning “this administration hasn’t had a scandal” over and over again will make history disappear. It’s the lamest Jedi Mind Trick ever, and is being pushed on people who know Star Wars is just a movie. 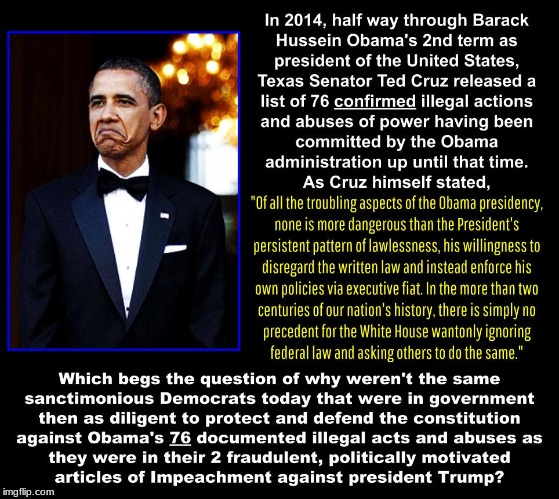