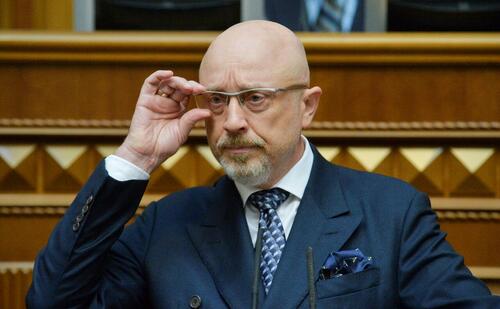 Q: How can you tell when Joe Biden is lying?

A: His lips are moving.

Say it ain’t so Joe!

I’ll cite hundreds of additional examples in my upcoming book.

See I can lie to Joe.

But when I spin a tall tale it doesn’t often lead to war with Russia.

In fact it never has but the jury is still out on our president.

From Jason Ditz, via Zero Hedge:

Ukraine Defense Minister Oleksii Reznikov told parliament on Friday that there is a low probability of any major escalation with Russia. He added that Ukraine intelligence sees every move made in the area.

Tensions at the Russia-Ukraine border have been ongoing, with several Western nations repeatedly predicting a huge war. Ukraine has chided those nations for causing a panic.

“Our intelligence sees every move that could pose a potential threat to Ukraine. We estimate the probability of a large-scale escalation as low,” Reznikov said.

The timing of the statement is interesting given that just the day prior, President Joe Biden stuck by the White House assessment that an invasion is imminent.

“We have reason to believe they are engaged in a false flag operation to have an excuse to go in,” Biden told reporters at the White House on Thursday. “Every indication we have is they’re prepared to go into Ukraine and attack Ukraine.”

The fact that Ukraine’s defense chief, who is certainly closer to the situation than anyone at the White House, directly contradicted Biden’s words is no minor thing.

Predictions of such a conflict go back years, and while previous Ukraine officials had similar pessimism about it, more recently officials see a lot more chance for diplomacy.

Meanwhile, US officials have continued seeking to convince and warn Kiev that a ‘Russian invasion’ is imminent…

Grateful to @SecBlinken for sharing additional data and assessments on Russia’s aggressive plans. Ukraine is now even better prepared for any further scenarios. Ukrainian and American diplomacy will spare no effort to protect Ukraine. The U.S. stands by Ukraine resolutely. pic.twitter.com/FZD7TrBOyb

President Biden again predicted a Russian invasion Friday, noting a Russian offer to talk later this month and suggesting there’d be no point if invasion happens first. Ukraine’s own assessment is clearly far afield of America’s.

Ever wonder what these clowns are up to?

The obvious answer is that things are running rough in the first 13 months of Biden’s term and nothing pulls the country together like war.

Well that used to work but I’m not sure it will again.

You can’t fool 81,282,916 fake voters when a large percentage of those voters weren’t real to begin with Mr. President.

I expect that even the fake voters are starting to grow tired of these antics.

What about the average American that knows they voted for Trump and knows Trump won?

Well it’s worth a shot Joe.

Killing American soldiers and creating fake conflict might be the only chance you have to stop the bleeding. A snowball’s chance is still a chance.

Funded by the Chinese?

Who knew that The Biden Family has ties to China?

Waiter, check please… No more crab rangoon for me thanks.

Give me some Russian vodka in a to go cup.

Dean is back but needs help.