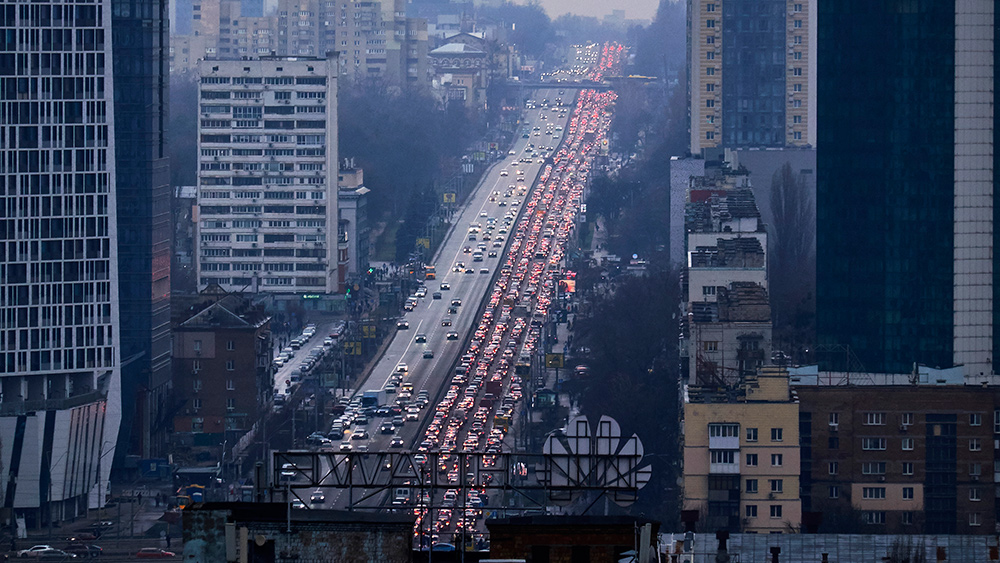 (Natural News) A Ukrainian man who escaped the onslaught of Russian forces after President Vladimir Putin ordered a full-scale invasion of his country took to Twitter to describe what he called a “hellish” 20-hour walk to Poland, along with photos to document what he encountered.

“It was a hellish 20-hour journey undertaken in the middle of winter with thousands of refugees. I saw some terrible things,” he continued, adding pictures of miles-long lines of vehicles on roads, a great many of which had simply been abandoned after running out of fuel.

Vehicles were backed up for 25 kilometers, many out of gas. Several were abandoned as their occupants fled west on foot as fast as possible. pic.twitter.com/XfTtR99AUH

The man went on to say that Ukrainian Army soldiers were also stopping vehicles and busses and rounding up any man between the ages of 18 and 60 to be conscripted to fight.

“In one place, a commissar was shouting, ‘say goodbye to your daughters, mothers, and girlfriends; you must turn back and fight the Russian invader!’”

UA soldiers were stopping cars and busses and yanking out any man aged 18-60 to conscript in the Ukrainian Army. In one place, a commissar was shouting “say goodbye to your daughters, mothers, and girlfriends; you must turn back and fight the Russian invader!” pic.twitter.com/B61MZ48S1n

“We made friends with a 24-year-old named Max who was pulled out of the caravan as he talked with us. I had time to get his number before his conscription and he left with a grin of utter disbelief. I will never forget that face,” the man posted, adding that when one wife screamed for her husband to be spared conscription, a soldier smacked her and took him anyway.

“Things seem really desperate,” he continued. “There were old women carrying rucksacks hobbling along the shoulder. I asked one where she was going and she said “Poland!” She was going to walk the 80km on her own. Toddlers took the journey hard. Many were forced to walk the distance despite not knowing what was going on.”

“Forget your wife, forget your daughter, fight for Ukraine.” pic.twitter.com/8IoZ9JIALK

“This was the longest and worst night of my life. I’m just speechless,” the man posted. “Anyway I’m currently in Poland, where a welcome committee greeted us with tea. It was amazing tea.”

This was the longest and worst night of my life. I’m just speechless.

Anyway I’m currently in Poland, where a welcome committee greeted us with tea. It was amazing tea. pic.twitter.com/GM1DadGXaj

Meanwhile, the war continued to rage on Monday, with Russian forces steadily advancing on Ukraine’s two major cities, the capital of Kyiv and the second-largest city of Kharkiv. Along the way, Russian forces have been suffering casualties, according to various reports showing blown-up tanks and burning Russian vehicles.

“Kharkiv has just been massively shelled with Grad multiple rocket launchers. Dozens of dead and hundreds of wounded! This horror must be seen by the whole world! Death to the occupiers!”  Anton Gerashchenko, an adviser to the Minister of Internal Affairs of Ukraine, documented on his Facebook page on Monday, as reported by Fox News.

The continued attacks come as Russian and Ukrainian negotiators met at the Belarusan border to discuss peace terms, which of course Russia hopes to dictate, especially after capturing two more Ukrainian cities ahead of talks.

“It is nothing short of remarkable what the Ukrainian military has accomplished,” said U.S. Army Gen. Jack Keane, who serves as chairman of the Institute for the Study of War.