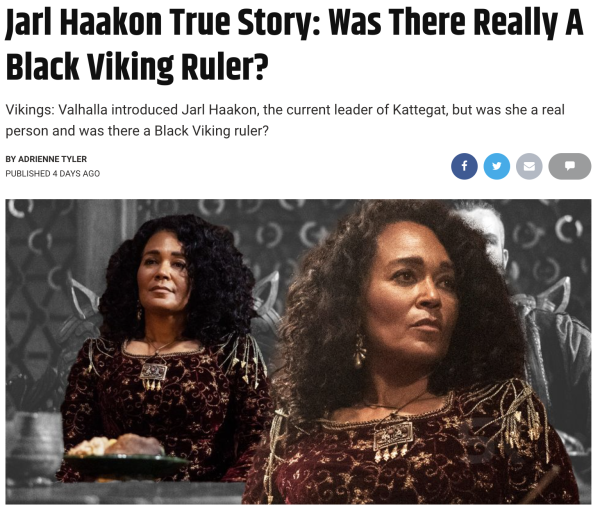 Just because an African was born in Scandinavia, doesn’t make them Scandinavian. No matter how much show runners and writers of “historical” movies and streaming programs believe history can be rewritten as a Marvel comic or Marvel Cinematic Universe reboot, history remains unchanged.

The Vikings were white and there was no black Viking warrior queen, unlike the current year demanding such a fictional character.

There can be Africans in Sweden or Africans in Norway (just as there can be Africans in America), but morals and ethics of the current year do not change what was once, no matter how fashionable a butt-kicking black Viking female leader might be in 2022. An African can not be a Swede. An African cannot be Norwegian. And yes, an African is ultimately just visiting America. [Was the Black Viking Leader Jarl Haakon Based on a Real Person? Yes and No, Newsweek, February 27, 2022]

Vikings: Valhalla, the spin-off to Amazon Prime’s and History’s Vikings is streaming on Netflix now. The sequel is set in the 11th century, approximately 100 years after the original series concluded, and follows a whole new set of famous Vikings and male, and female, rulers.

Danish-Swedish singer Caroline Henderson makes her debut acting role in the series as Jarl Haakon, the leader of Kattegat—but was the black Viking leader based on a real person?

Henderson spoke to Newsweek about the inspiration behind her character.

Was the Black Viking Leader Jarl Haakon Based on a Real Person?In Vikings: Valhalla, Caroline Henderson stars as Jaral Haakon, a female warrior, and respected leader.

History buffs may assume Jarl Haakon is based on the real historical figure also known as Haakon Sigurdsson, but this is not the whole story.

To begin with, the real Haakon Sigurdsson is a white man, whereas Vikings: Valhalla’s Haakon is a black woman.

The real Haakon Sigurdsson was a powerful earl and pagan leader, who became the de facto ruler of Norway from 975 to 995, and coined the name Hakon the Powerful. However, in Vikings: Valhalla, Haakon is the ruler of the fictional land of Kattegat.

Speaking to Newsweek, Henderson explained her character was inspired by both male and female characters from the Viking era.

She shared: “Haakon is fictional, purely fictional. So it’s not like a male character, it’s a fictional character but of course, she’s inspired and based on both male and female characters, and I think the writers did a wonderful job of sort of putting something together that could have been a historical character.”

Henderson also pointed to the historical setting in which her character Haakon rules. In the 11th century, the Vikings were continuing their raids on England and across Europe. There was also great tension between the traditional pagan Vikings and the new, Christian Vikings.

Henderson said: “She is the ruler of Kattegat and she is also into paganism and she’s very headstrong and her beliefs. She rules through a very difficult time in history because Viking time paganism is going down, Christianity is coming up.

“People want to conquer more land, so it’s a difficult time for her but she’s trying to rule with tolerance and openness, which is quite difficult, and is historically correct in that sense because that was a very challenging time in history. A little bit maybe relatable to what’s happening in 2022.”

As one of the very few black characters in the show, fans of Vikings: Valhalla may also be interested to know Black Vikings really did exist in Scandinavia as a result of their own travels or unfortunately, as slaves.

Henderson shared how the geographic span of the Viking world shaped her character Haakon: “I’m Scandinavian. I’m born in Stockholm, like Frieda [Gustavsson, co-star] and I think that’s part of our history. I mean, my mother was obsessed with Vikings. She told me a lot about sort of the female material line of women, fierce women.

“We learned in school, I read everything about it. I knew kind of how much they traveled, how much they raided but how much knowledge they came back with from Asia, America, Africa, Russia, etc, etc.

“So for me, it was even more sort of thrilling to dig into this, what I love, and kind of piece my character together. It was amazing because somebody like that could actually have existed. I don’t know. But it’s exciting.”

A black Viking female warrior did not exist, nor could have actually existed. Only in a mind poisoned by modernity could such a hilariously incorrect exaggeration of historical fan fiction/racial cosplaying exist.

Tolerance and openness are tools of oppression and persecution against those willing to believe the individuals wielding power in such a society have honesty and unity in mind.

In 2022, our history is nothing more than a bludgeon for those in power to try and coerce us to believe diversity, racial integration and multiculturalism were values cherished by European people since history began.

No, Caroline Henderson, a black Viking female warrior did not exist, save in the minds of those writers employed by Netflix.