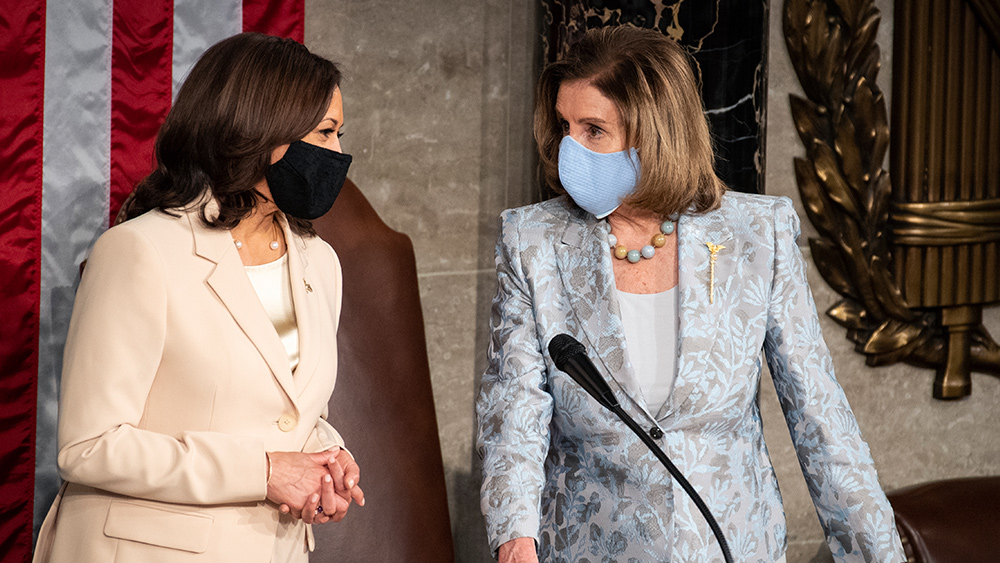 As the Dementia King mumbled through a delivery about veterans inhaling toxic fumes, Pelosi stood up and bizarrely started to rub her fists together while grinning from ear to ear. She also appeared drunk and/or hopped up on pharmaceuticals or other drugs – see below:

Nancy Pelosi's reaction to troops "breathing in toxic smoke from burn pits" is the weirdest/creepiest thing I've ever seen. pic.twitter.com/SJ1P7fnN3e

“And our troops in Iraq,” Biden said with that iconic confused look plastered across his face, “and faced in ’em Afghanist … and faced many dangers, one being stationed in bases breathing in toxic smoke from burn pits.”

Before Hunter’s dad could finish saying the words “burn pits,” Pelosi hopped out of her seat with a maniacal grin on her face and started rubbing her clenched fists together with excitement.

Is Nancy Pelosi possessed by demons?

A longer version of the video – see below – shows that Pelosi continued the creepy hand-rubbing for about 10 seconds.

Why did Pelosi do this, many are now wondering? Some have speculated that perhaps she was sending some kind of signal, possibly to the rest of the Democrats in the room encouraging them to clap and cheer for whatever it was that China Joe in all of his cringe-worthy derangement was trying to say.

“The problem was, it came during a completely unwelcome part of the speech,” wrote C. Douglas Golden for the Western Journal.

A transcript for the New York Times suggests that Biden was trying to talk about “a sacred obligation to equip those we send to war and care for those and their family when they come home” when he mentioned that “our troops in Iraq and Afghanistan have faced many dangers.”

“One being stationed at bases, breathing in toxic smoke from burn pits,” the Times transcript further reads in a cleaned-up version of Biden’s speech that makes it sound more professional and more accurately delivered than it actually was.

“Many of you have been there. I’ve been in and out of Iraq and Afghanistan over 40 times. These burn pits that incinerate waste, the waste of war – medical and hazardous material, jet fuel and so much more.”

“And they came home, many of the world’s fittest and best-trained warriors in the world, never the same. Headaches. Numbness. Dizziness. A cancer that would put them in a flag-draped coffin.”

As Biden continued to speculate that perhaps his son Beau contracted cancer because of exposure to toxins in burn pits while he was deployed to Kosovo and Iraq, Pelosi and the Democrats were cheering and clapping as Pelosi rubbed her hands together vigilantly.

Other strange things happened during the speech, including a moment when Senate Majority Leader Chuck Schumer (D-N.Y.) stood up and started applauding at the wrong time, as well as numerous times – more than we can even count, in fact – when Biden had trouble forming a complete sentence.

“If I don’t miss my guess, The Speaker was sloshed,” wrote someone at the Journal about Pelosi’s obviously altered state during Biden’s “speech.”

More related news can be found at Corruption.news.