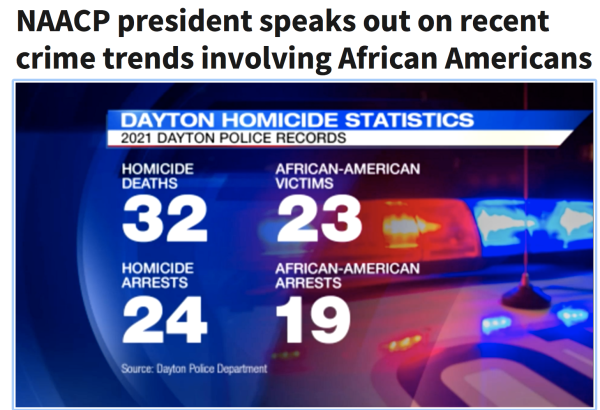 Dayton, Ohio is 52 percent white and 38 percent black. Home to an Air Force base, Dayton is also home to a city dominated by black violent crime. And now, with virtually all violent crime committed by blacks against blacks, even the NAACP is begging black people to stop killing/shooting other black people. [NAACP president speaks out on recent crime trends involving African Americans, WHIO.com, February 25, 2022]:

DAYTON — In many Dayton neighborhoods, there has always been concerns about the interactions between police and young black males, but there are many signs that there is a growing concern about a rising tide of violence overall.

The overwhelming grief, anger and frustration about violent and senseless deaths in Dayton is rising.

Dr. Derrick Foward, President of the Dayton Chapter of the NAACP, spoke at a news conference, flanked by a mother and a wife who are mourning the loss of Brandon Cooper, the 35-year-old Lyft driver who was shot and killed during an attempted carjacking while on the job.

The teens arrested and accused of killing Cooper are also African American.

He said the NAACP is not about to stop fighting for civil rights of African Americans involved in any potential incidents, and those abused or killed by police. However, all four homicide victims in the city have been African American and so are all six people arrested and accused of involvement in those crimes. That statistic was concerning to Foward.

News Center 7 requested the numbers and demographic information about homicides in Dayton from the Dayton Police Department. The information confirmed the trend Foward pointed out.

“When I think of 32 homicides in 2021 and 23 of them are African American, that makes my heart ache,” Foward said.

Community leaders have pointed out that sometimes these types of statistics lead to minority neighborhoods receiving increased police patrols, but no increase in development funding.

Derek Williams, of Dayton, said he sees a lot of vacant eyesores and lack of new investment when he walks back and forth to the store from his home near N. Main Street.

“It looks crummy now, like someone just [doesn’t] care. You walk up and down, you want to see nice houses,” Williams said.

The city of Dayton has pledged to spend $15 million of federal funding in the next three years to demolish nuisance buildings across all city neighborhoods.

What white people abandon to black people, quickly recedes to the black mean… even the infrastructure white people leave behind. The visible black hand of economics is casually deemed structural inequality or implicit bias or white privilege by our elite (perhaps even invoking redlining for the slums black people primarily reside in, that were once prosperous white communities full of white kids), but in reality, the conditions of a majority black community are nothing more than the collective capabilities of individual black people once white people have been removed from the equation.

Such is Dayton, Ohio in 2022, where black people prove on a daily basis that Black Lives Don’t Matter (hint: it’s been that way for decades.)