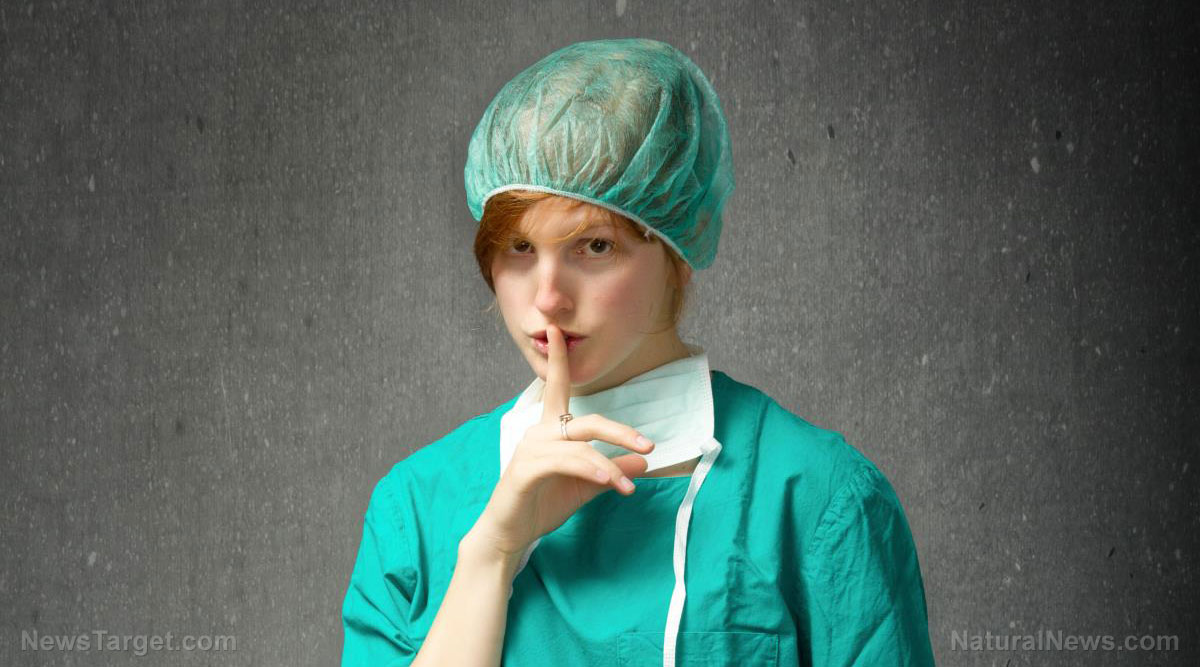 (Natural News) How would everyone feel about vaccines if they knew people were dropping dead like flies after getting the Wuhan coronavirus (COVID-19) clot shots? A nurse named Tiffany Dover, who worked at CHI Memorial Hospital in Tennessee, with over 20 years experience, fainted on live television while bragging about how great it is to get vaccinated for COVID-19.

Now she’s nowhere to be found, and the internet is rife with rumors she’s six feet under, while the mass media scrambles to cover it up with another false narrative to save face for those deadly gene mutating injections.

Fake news is spreading their cover story for Dover, saying she suffered from vasovagal, where you faint from stress, and that’s she’s perfectly okay, living her life in absolute seclusion where nobody can verify she survived the deadly experience of getting jabbed with a blood-clotting serum made by the same freak scientists that made the SARS-CoV-2 virus.

The media claims Dover has had a history of this over-reactive “vagal response” to even minor pain, even though she said how great she felt just seconds before she passed out and possibly died. Yes, we are still talking about the same nurse who’s worked for 20 years in a hospital where she sees blood and experiences stress every day. So does she have a history of passing out while helping the doctors during surgery? Inquiring minds want to know.

What nursing school graduates a nurse who passes out every time she feels stress?

Why did the group of several dozen nurses choose Tiffany Dover to get the deadly COVID jab live on TV? If she has a history of passing out from pain, shouldn’t they have chosen someone else? And how could this person ever have become a nurse if this vasovagal cover-story is real?

Tiffany Dover worked as a nurse manager in the emergency room, and it is said in the false-narratives that attempt to explain away what happened on live TV, that her vasovagal condition caused her to pass out six times in the six weeks leading up to the incident. This lady worked in the ER at CHI Memorial Hospital. How? Does she just drop patients head first on the cement floor when she’s helping them walk down the hall as she passes out from “stress?”

Well, where you smell smoke, there’s fire, they say. This whole incident is a bonfire then, and the whole world should know if this lady died right after getting the clot shot, like so many others who disappear from planet Earth shortly after getting that “safe and effective” jab that’s really a dangerous medical experiment for reducing the world’s population by a few billion. Looks like it’s very “effective” at THAT.

Every single shred of possible proof Tiffany Dover is still alive has been deleted from the internet, so where is she?

Tiffany Dover’s Facebook page was taken down after 22,000 people posted “Rest in Peace” and other comments about her being gone. Disappeared. The hospital swears up and down she’s fine, but every local news and mass media article about her has a video link that supposedly “proves” she’s still alive, except every one of those links is “broken,” or says “no access allowed,” or it claims “this video does not exist” when you click on it. Tiffany no longer has ANY social media accounts. Is this a COVID-vaccine-induced-death cover-up by the mass media?

Tiffany isn’t the first person to heavily promote the death stab and then disappear from Earth shortly after. Doctors, scientists and celebrities from around the globe have bragged up and down about the “safety” and “efficacy” of the clot shots for gain-of-function disease, and then dropped dead of a heart attack or stroke shortly after, only to be blamed on anything else by the mass media.

During a live news conference to promote the deadly jabs, Dover got the shot with her surgical mask on, then stood up to take questions from reporters, put her hand on her head, said she felt dizzy, sunk to her knees, and had to be caught by her cohorts before hitting the floor. The hospital is running cover, tweeting out that Dover is “home and doing well.”

The mass media calls any talk of Dover’s disappearance as “misinformation,” and the Department of Homeland Security calls this type of free speech “domestic terrorism.” No American is allowed to ask any questions about the COVID vaccines ever again, or face unlimited jail time with no trial, like the January 6’ers.

Even the Alabama Public Health Department can’t prove she’s alive. They’re just saying that anyone who says she’s dead is posting “untrue” statements. If anyone can prove she’s alive, please do so. Bookmark Vaccines.news to your favorite independent websites for updates on experimental scamdemic COVID “vaccines” and “boosters” that cause blood clots and other horrific side effects.