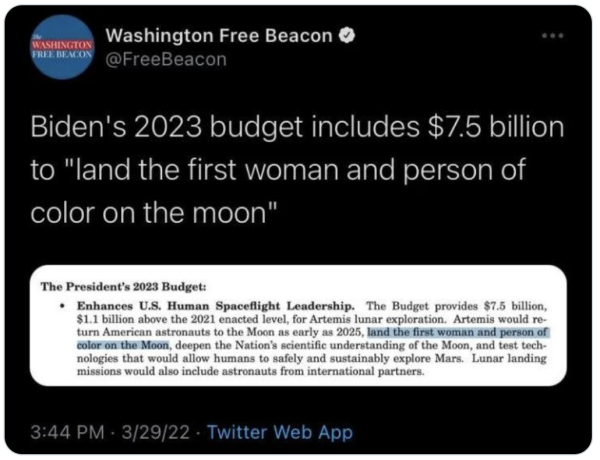 President Joe Biden’s budget allocates billions of dollars toward advancing “equity” in dozens of government agencies, even as his administration attempts to sell it as a moderate proposal.

Biden’s spending plan mentions “equity” and its derivatives more than 100 times, including in a $48 million allocation for an “equitable National Park System.” With this money, the Department of the Interior “would expand operations at parks that preserve and tell the story of historically underrepresented and marginalized groups.” The State Department will receive $2.6 billion under the plan to “advance gender equity.” The Environmental Protection Agency will receive more than $1.5 billion to “advance racial equity and secure environmental justice for communities.”

With a price tag of $5.8 trillion, the budget displays a commitment to the nebulous left-wing concept of “equity,” which often includes “antiracism” training, explicitly favoring minority job applicants when hiring or direct cash handouts to aggrieved groups.

“Persistent systemic inequities and barriers to opportunity have denied this promise for so many,” the introduction to Biden’s budget reads. “That is why the president has taken historic steps to put equity at the center of his agenda—and why the president assembled the most diverse cabinet in American history to deliver on this government-wide effort.”

The 158-page document provides a framework for funding the federal government’s total spending in the 2023 fiscal year. The budget has been described by the New York Times as “centrist” and a “peace offering” to moderates by Politico. The Biden administration and members of the media have noted the budget contains only a few references to the president’s “Build Back Better” agenda and includes increased funding for local police departments—proof, they say, of the president’s pivot to the middle. But there is a clear focus on left-wing priorities.

Another $20 million is allocated to the Department of Transportation’s efforts “to promote equity and inclusion.” This funding would help, among other things, mitigate or negate “the effects of structural obstacles to building wealth.”

NASA receives a $2.7 billion boost in funding. Of the agency’s entire budget, $150 million of it goes to targeting “engagement of underserved populations, including underserved students and people of color.” And $7.5 billion is devoted to the Artemis lunar exploration mission, which would “land the first woman and person of color on the moon.”

Read that last paragraph again: NASA receives a $2.7 billion boost in funding. Of the agency’s entire budget, $150 million of it goes to targeting “engagement of underserved populations, including underserved students and people of color.” And $7.5 billion is devoted to the Artemis lunar exploration mission, which would “land the first woman and person of color on the moon.”

What white men built and achieved more than 50 years ago must now be solely utilized to uplift women and people of color… not for the advancement of all mankind, but exclusively for the benefit of non-whites and women.

Yes, it’s okay to cheer for the moon.

Our elite hate white males, yet rely on white males for women and people of color to finally achieve what white men exclusively did back on July 20, 1969.