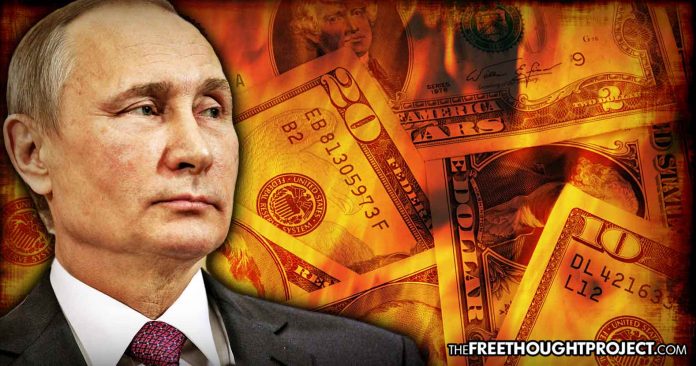 Ever wonder where all of this economy collapsing “green energy” propaganda is coming from?

No doubt the liberals are not in possession of much common sense, but they are certainly getting some help from Mother Russia.

Would it surprise you if Russia was funding a lot of this Green Energy BS right here within our own borders? If so then you probably need to turn off the TV and start doing your own research.

Putin is laughing at us as I write this. The best way to collapse America is to put the liberal agenda in power and it certainly seems that Russia has been helping to make that happen.

This just in from our friend Joe Hoft…

Russia is behind much of the propaganda in the West that supports ‘green energy’ and banning fracking.  This enables Russia’s dominance in the energy sector.

China too would like to see the US energy-dependent so that the US does not get ahead of them in any way.  American energy dependence also places the US at the mercy of other countries in many ways.

The best way to destroy America’s energy independence was to find corrupt politicians who were open to altering this matter.  Of course, donations and dark money were likely part of the equation.   This and the propaganda in the public realm to help soften the insanity of energy dependence is the strategy for Russia and likely other countries and corrupt politicians.

President Trump shattered the belief that the US had to be energy-dependent and was unable to be independent.  Under his administration, the US was energy independent for the first time in decades.  Now the Biden gang is destroying the policy of energy independence.

A report at the Gatestone Institute discusses Russia’s influence on energy policies in the West. The article started off by mentioning some recent events:

The article continues with its observations from a Wall Street Journal piece:

“With winter fast approaching, Europe finds itself in an energy crisis—and reliant on the tender mercies of Russian strongman Vladimir Putin. It’s a self-induced disaster years in the making”.

That was how an October 20, 2021 editorial in the Wall Street Journal began, before Russia amassed its troops on the Ukrainian border and no analyst or think tank imagined that the unthinkable was around the corner. The editorial continued:

“European leaders have handicapped themselves on energy in the name of pursuing a climate agenda that will have no effect on the climate but is raising energy prices, harming consumers and industry, and is now empowering the bullies in the Kremlin.

As Europe was facing its own energy suicide and just before Putin began obliterating Ukraine, what was US Secretary of State John Kerry, the U.S. “climate czar”, concerned about? About the “massive emissions impact” of the war as well as its being a distraction from the fight against climate change. “I hope President Putin will help us to stay on track with respect to what we need to do for the climate,” he told the BBC.

Here is another scam: Not only do Germany and France have enough natural gas reserves to replace Russian gas for more than 20 years, but its extraction has been forbidden “for environmental reasons.”

“It did so with aggression, natural gas, & nuclear

The Biden gang is not interested in the democratic Western civilization.  The Bidens have a history of being more interested in money.

The Hoft brothers have been digging for truth for years and are now starting to uncover that the leftist ties to green energy might not be as much pipe dream as they are political.

Russia has every reason in the world to weaken America and don’t believe that they have not been trying to do so for a long, long time.

Isn’t it convenient that all of this is happening under Biden’s watch? Putin respected Trump and is playing Biden for the fool he is.

Dean Garrison is the publisher of DC Clothesline and DC Dirty Laundry. Full reprint rights are granted, in full or part, so long as you link back to us. The truth must come out.