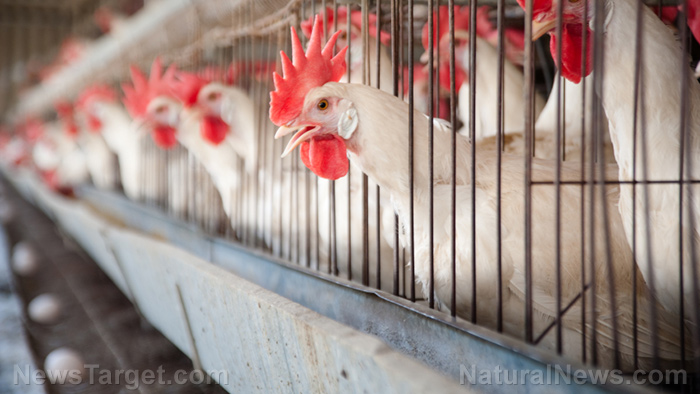 (Natural News) More than 17 million poultry birds, including chickens and turkeys, have died in recent months, supposedly due to a new wave of avian flu. And in the aftermath, egg prices are rising in some areas.

According to reports, egg prices recently reached their highest point since the beginning of the Wuhan coronavirus (COVID-19) plandemic, with shell prices rising to $2.88 a dozen. This represents an increase of about 52 percent since February 8 when the U.S. Department of Agriculture (USDA) confirmed the first bird flu case in a commercial flock in Indiana.

Because of the disease, we are told, roughly three percent of all egg-laying chickens in the U.S. have perished, and this has occurred at a really inconvenient time, Easter, when egg sales are typically the highest.

“Egg availability heading into Easter is sure to be hampered,” said Brian Earnest, an animal protein economist at CoBank.

For many years now, the population of egg-laying chickens in the United States has been declining. In April 2019, there were 340 million birds, but as of February 2022, there were only 322 million birds. Meanwhile, check out these five strategies to protect your chickens from bird flu.

Experts do not expect any immediate supply shortages. However, retailers are reportedly buying up eggs in anticipation of a possible supply crunch in the days leading up to Easter.

In addition to chickens, turkeys are also said to be dying from bird flu, though not in the same numbers as chickens.

In the last two months, dozens of bird flu cases have been reported across the U.S. from Maryland to South Dakota. The USDA also confirmed the presence of the disease in five new states.

As is often the case, the United Kingdom went overboard in response to the news by imposing a “bird flu lockdown” that saw free-range eggs disappear from grocery stores.

Much like what happened to human beings during the plandemic, authorities in England forcibly “quarantined” eggs from the grocery store, leaving shelves empty and bellies that rely on eggs for sustenance hungry.

“Around 35 million of Britain’s hens have spent the last four months cooped up after an unprecedented spike in case numbers led to the ‘largest ever’ outbreak of H5N1, also known as avian flu, on U.K. soil,” reported the Daily Mail.

“Officials at the Department of Environment, Food and Rural Affairs (Defra) ordered millions of egg-laying hens in Britain indoors on November 3, then brought additional housing measures into force on November 29.”

Because the birds were housed for more than 16 weeks, poultry keepers were no longer able to retain their free-range status for either eggs or meat. Instead, the eggs had to be marketed as “barn eggs.”

Farmers throughout the country had hoped that the government there would lift the indoor housing order next week, but those hopes were dashed after government officials decided to keep it in place after the total number of outbreaks supposedly reached 80.

“There is no virus; they are for the birds,” joked one commenter at the Daily Mail. “Keeping them indoors is making them get sick.”

“I hope Britain doesn’t believe this Bird Flu or Avian Flu joke, again,” suggested another. “It wasn’t true last time and it’s not true this time. The leaders of the world are laughing at us. It’s for the gullible. Wake up! They are making fools out of you.”