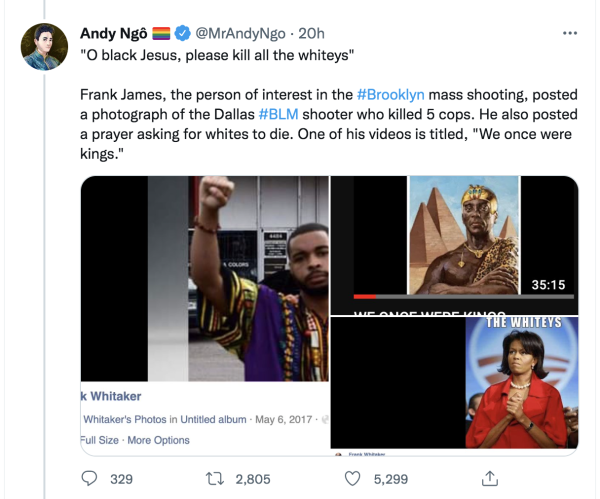 Another black mass shooting by a black nationalist who wrote about hating white people. In fact, he wrote “kill all whiteys” back in 2006. He hit 10 people in the mass shooting.

Social media posts from a person of interest in connection to a mass shooting attack on New York City’s subway on Tuesday showed leftist, racist, anti-Trump views, according to reports.

Videos from the attack on the subway showed that the air was filled with smoke from smoke bombs that had been detonated. The suspect fired dozens of rounds during the attack, hitting at least 10 people. Another 19 people were injured in the chaos that ensued from the attack.

Heavy.com, a fact-finding website, identified a Facebook page allegedly belonging to the person of interest which contained numerous posts that talked about shooting people and expressed other extreme views, including “black nationalism.”

YouTube videos allegedly uploaded by the person of interest also showed extreme views, including one where he allegedly called 9/11 “the most beautiful day, probably in the history of this fucking world.”

The person of interest also allegedly ranted in the videos about white people, saying “the vast majority of people, white mother******* are racist.”

Yet another mass shooting involving a black supremacist. This is what’s happening: people marinating in a 24/7 news, academic, advertising, and entertainment cycle that is 100 percent anti-white ultimately results in more and more anti-white violence.