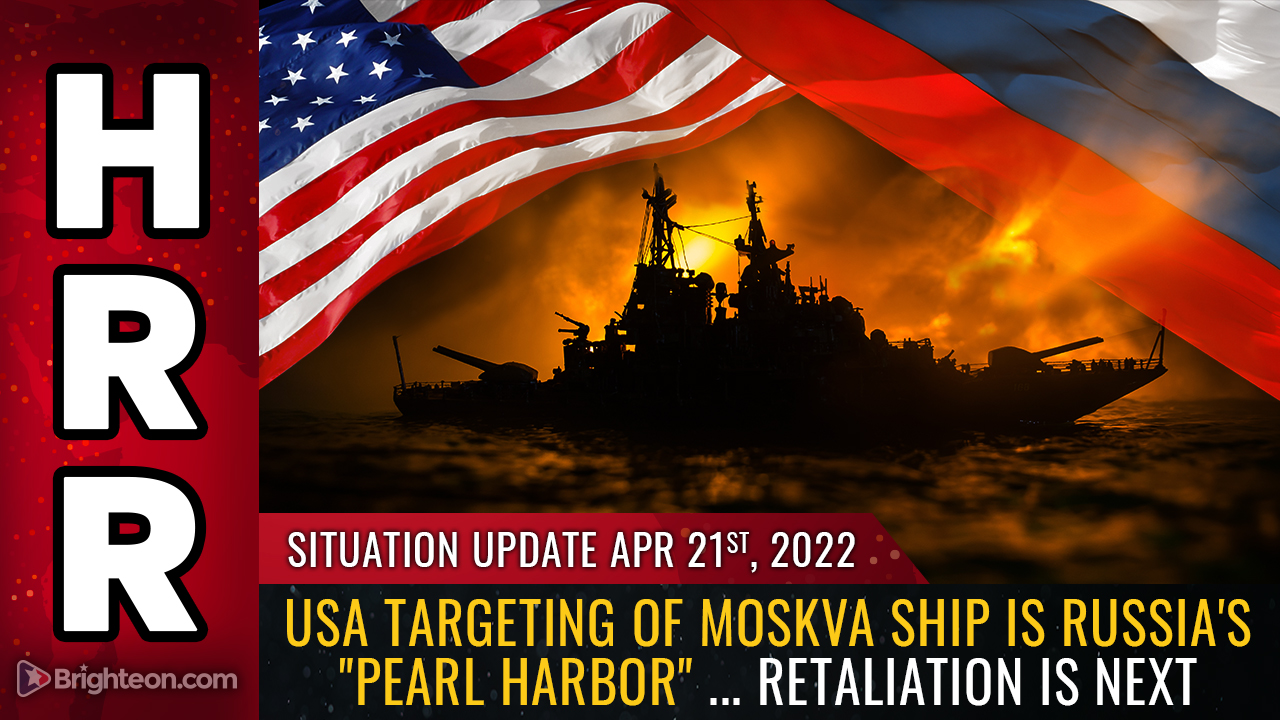 (Natural News) To understand the sinking of the Moskva and Putin’s impending retaliation against the United States, you first have to realize that any national leader wanting to make bold military moves first needs the support of his own people. In 1941, Pearl Harbor was allowed to happen (the US government knew all about it and even provoked it) in order to create the emotional support for the US to enter the Pacific theater of war.

The attack on Pearl Harbor was, essentially, the 9/11 of World War II. And just as with 9/11, the US government knew all about it and allowed it to take place in order to produce the casualties and emotional reaction that would see the American people demanding retaliation against Japan.

It has now been revealed that the US military ran the entire operation to sink the Moskva, including running the tracking of the ship via a P-8 Poseidon surveillance aircraft, which then handed off fire solutions to the Ukrainians who were all trained by the US military as well. Thus, the United States provided the weapons, the training, the tracking and the fire solution to sink the Moskva. All Ukraine did was press the “fire” button, essentially. This is so widely known know that it’s even being reported by the UK Daily Mail. It reports:

REVEALED: US maritime surveillance plane was over Black Sea minutes before Russian flagship Moskva was ‘hit by Ukrainian missiles’
A P-8 Poseidon surveillance aircraft was patrolling the coast before the attack

The high-tech jet can spot ships on radar at ranges of more than 100 miles…  The US Navy used its new marine surveillance aircraft to provide accurate targeting data to Ukrainian forces to sink the Russian Black Sea flag ship Moskva on April 13.

By sinking the Moskva, the US just handed Putin something akin to “Russia’s Pearl Harbor moment,” in which Putin can claim to his people that the USA initiated an attack on the Russian Navy, sinking one of their ships and killing hundreds of their people. This news has, of course, been paraded all across Russian media, driving domestic support for Putin even higher than before.

Just like with Pearl Harbor in the United States, the people of Russia are now demanding “payback” from the aggressors, whom they see as the United States. In effect, the USA just handed Putin the final piece of the puzzle that he needs to launch retaliatory nuclear strikes against the West.

It is no coincidence that Russia has just unveiled a test launch of its RS-28 Sarmat (Satan 2) ICBM which carries up to 15 MIRV warheads. These are independent re-entry vehicles, each one carrying a nuclear warhead hundreds of times larger than the atomic bombs used on Japan in World War II.

The RS-28 also carries Hypersonic Glide Vehicles (HGV) which glide at extreme speeds while maneuvering to their targets, utterly evading every defensive system owned by the United States. Put another way, the USA is utterly defenseless to stop Russia’s nuclear weapons from striking US-based targets.

It takes roughly 30 minutes for one of these ICBMs to fly from Moscow to New York City. Should Putin launch one, the people of New York would have no warning whatsoever, since the traitorous, occupying US government almost certainly wouldn’t bother to warn anyone if they only have a few minutes remaining to evacuate.

Thus, at any given moment, millions of Americans are just 30 minutes away from total annihilation. Russia could even, theoretically, launch a missile featuring high-altitude EMP detonation, plunging the United States into a 19th-century Dark Ages existence in which roughly 90% of the population would die within a year or so due to mass starvation, collapse, violence, disease and so on.

The RS-28 Sarmat is capable of carrying about 10 tons of payload for either up to 10 heavy, or 15 light, MIRV warheads,  as well as an unspecified number of Avangard hypersonic glide vehicles (HGVs) or a combination of warheads.  It also carries several countermeasures against anti-ballistic missile systems. The Russian ministry of Defense said that the missile is Russia’s response to the U.S. Prompt Global Strike system.

While the Pentagon has been focused on creating gay helicopter crews and transgender soldiers, Russia has been engineering highly effective, high-tech weapon delivery systems such as hypersonic missiles and advanced ICBMs.

While America’s traitorous leaders are dismantling America’s energy infrastructure and transportation system (see the recent clobbering of Union Pacific railway deliveries), Russia is raking in record profits from energy sales while convincing many top nations around the world to buy energy in Rubles rather than dollars.

The US empire, steeped in corruption, pedophilia, criminality and insanity, is finished. Now it’s only a matter of time to watch the self-immolation of the United States of America accelerate by the day.

Mark my words: Before the end of this year, America’s cities will be in flames from the food riots. Government tyranny will be out of control, and we will be witnessing the early chapters of either a mass uprising or a civil war (or perhaps elements of both). Mass starvation is coming to the West, and it was the insanely stupid economic sanctions against Russia that initiated the entire catastrophic chain reaction that will lead to the fall of America as we know it.

A very sad day, indeed. Then again, with America’s abortion fanatics going all-out insane on mass murdering babies, it begs the question of whether a “reboot” might be the only way to restore the Christian values upon which America was originally founded. As Michael Snyder writes, “The End Of Civilization As We Know It Is Coming – And That Is Actually Really Good News.”

Is he correct? Only time will tell.

Get more details on all this in today’s Situation Update podcast: