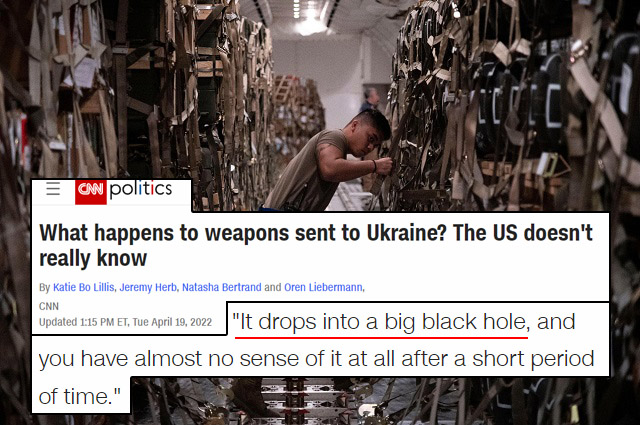 The Biden regime is dumping billions of dollars worth of scarce American high-tech weaponry into a “black hole” in Ukraine.

From Reuters, “Biden admin preparing to announce another military aid package for Ukraine”:

The Biden administration is preparing to announce another substantial military aid package for Ukraine this week, five U.S officials tell NBC News. Three officials said the package is expected to be similar in size to the $800 million one the administration announced last week.

Two officials said the package is expected to include more artillery and tens of thousands more artillery rounds, which will likely be critical to the fighting in Ukraine’s eastern Donbas region.

President Joe Biden has not signed the new package, officials said. But asked Tuesday if he will send more artillery to Ukraine, Biden said, “Yes.”

If this latest package is another $800 million, that means the Biden regime together with our sold-out Congress will have sent Ukraine around $15.2 billion in aid just since the war kicked off on Feb 24.

Americans are struggling with record inflation and yet the DC regime just keeps dumping our money into this black hole knowing full well it could spark World War III.

Supply crates containing munitions and other explosive material bound for Ukraine are loaded at Dover Air Force Base in April 2022. pic.twitter.com/hN68rceBAS

The Washington Post admitted earlier this month that NATO is intentionally seeking to prolong the conflict in Ukraine just to drag down Russia as part of a proxy war. This “aid” is essentially just bribe money to Zelensky to keep the war going and keep Ukrainians dying.

From CNN on Tuesday, “What happens to weapons sent to Ukraine? The US doesn’t really know”:

The US has few ways to track the substantial supply of anti-tank, anti-aircraft and other weaponry it has sent across the border into Ukraine, sources tell CNN, a blind spot that’s due in large part to the lack of US boots on the ground in the country — and the easy portability of many of the smaller systems now pouring across the border.

It’s a conscious risk the Biden administration is willing to take.

In the short term, the US sees the transfer of hundreds of millions of dollars’ worth of equipment to be vital to the Ukrainians’ ability to hold off Moscow’s invasion. A senior defense official said Tuesday that it is “certainly the largest recent supply to a partner country in a conflict.” But the risk, both current US officials and defense analysts say, is that in the long term, some of those weapons may wind up in the hands of other militaries and militias that the US did not intend to arm.

“We have fidelity for a short time, but when it enters the fog of war, we have almost zero,” said one source briefed on US intelligence. “It drops into a big black hole, and you have almost no sense of it at all after a short period of time.”

In making the decision to send billions of dollars of weapons and equipment into Ukraine, the Biden administration factored in the risk that some of the shipments may ultimately end up in unexpected places, a defense official said.

But right now, the official said, the administration views a failure to adequately arm Ukraine as a greater risk.

Because the US military is not on the ground, the US and NATO are heavily reliant on information provided by Ukraine’s government. Privately, officials recognize that Ukraine has an incentive to give only information that will bolster their case for more aid, more arms and more diplomatic assistance.

Tons of these weapons are going straight to the black market, others are falling into Russian hands and others are apparently being blown up upon arrival in Russian air strikes.

Ukraine soldiers sell an armored vehicle and other weapons to the DPR militias.

The sale took place in the area of ​​N. p. Snigirevka, Mykolaiv region.

Note, the Ukrainian soldiers accept US dollars and Russian rubles as payment.

Russian missile strikes 124th Joint Logistics Support Center of the Logistics Command of the Armed Forces of Ukraine near Lviv.

The logistics center contained foreign weapons that were delivered to Ukraine over the past 6 days from the United States and NATO pic.twitter.com/dII5tcTOHT

Lots of #US-made Javelins ATGM were seized by the Russian forces. pic.twitter.com/VvSrgvrL9Y

Trophy Javelins: the Russian Defense Ministry published footage of the transfer of captured weapons of the Armed Forces of Ukraine and Western countries to the units of the people's militia of the LPR and DPR"https://t.co/vyhbqppdIi pic.twitter.com/fqKidMHMQB

Each Javelin the US produces costs $178,000. It was reported last week that the US has already sent an estimated one-third of our stockpile to Ukraine.

From Business Insider, “Will the US run out of Javelin anti-tank missiles to give Ukraine before Russia runs out of tanks?”:

The United States has not published figures about its Javelin inventory, so this must be deduced. According to the Army budget books, total production has been 37,739 since production began in 1994.

Every year, US forces use some missiles for training and testing. Thus, there may be 20,000 to 25,000 remaining in the stockpiles. These 7,000 systems represent about one-third of the US total inventory.

At some point, those stocks will get low enough that military planners will question whether the war plans can be executed. The United States is likely approaching that point.

The obvious answer is to build more missiles (and launch units, the control box that goes on the missile). The United States has been buying Javelins at the rate of about 1,000 a year. The maximum production rate is 6,480 a year, though it would likely take a year or more to reach that level. The delivery time is 32 months; that is, once an order is placed, it will take 32 months before a missile is delivered.

This means that it will take about three or four years to replace the missiles that have been delivered so far. If the United States delivers more missiles to Ukraine, this time to replace extends.

The US has also reportedly sent some 2,000 out of an estimated 8,000 stockpiled Stinger missiles to Ukraine.

“In 2003, the last time the United States procured Stingers, production rates were stated as 275 with standard shifts (called ‘1-8-5’) and 720 at maximum production rate. Production lead time was 24 months. That means it will take at least five years to replace the inventory drawdown (two years for lead time and three years for production),” BI reported. High-ranking Democrats are pushing for the US to put boots on the ground in Ukraine (the French paper Le Figaro claimed a week ago US and UK soldiers are already there).

Sen. Chris Coons, the Biden conduit who holds his former seat in Delaware, has actively begun floating the deployment of US troops to Ukraine: "Putin will only stop when we" — the US — "stop him," Coons warns pic.twitter.com/ABydvBPuO0

What moronic decision will our occupiers make next?