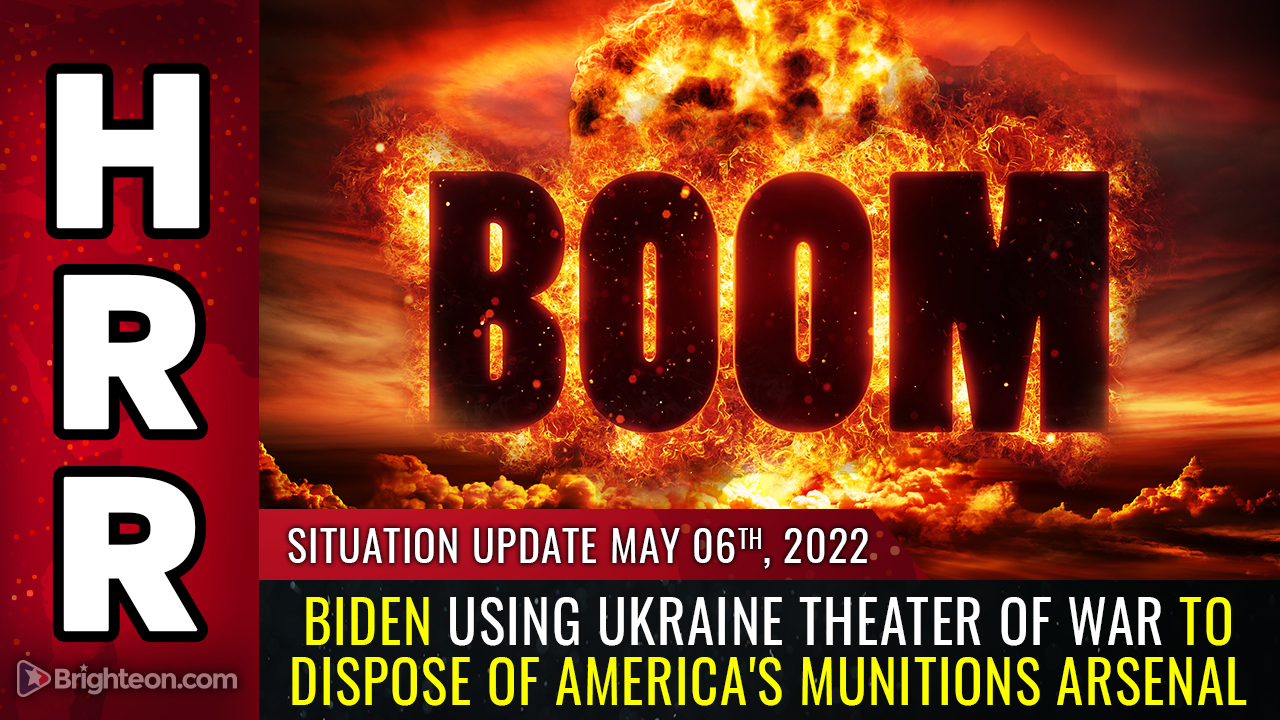 (Natural News) During the recent military withdrawal from Afghanistan, the Biden regime left behind $10+ billion in US military hardware, including aircraft, helicopters, armored vehicles, missiles, munitions, firearms and more. This was, of course, a deliberate effort to arm America’s enemies while depleting America’s own military hardware stockpiles.

The Ukraine conflict is yet another scheme where Biden, under the control of communist China, is disposing of America’s munitions by feeding them into the “Russia grinder” where these weapons are destroyed on their way to the front lines in Ukraine.

The goal of this is not merely to help Ukraine win the war (which looks hopeless at this point) but rather to deplete America’s weapons stockpiles in an effort to weaken America before China’s long-planned invasion gets under way.

China is watching carefully and calculating the rapid draw-down of America’s anti-tank weapons, drones, armored vehicles, artillery units, artillery ammunition and other key elements that would be necessary for America to defend herself against a Chinese invasion. The more of these weapons are sent to Ukraine, the weaker America’s homeland defenses become.

The Biden regime is run by Obama, who has been working to weaken and dismantle the USA

Understand that Biden is run by Obama, and Obama has been working with globalists to destroy the United States from the very start of his administration in January, 2009. Some of the attacks on America that have been waged with the help of Obama include culture wars, racial division, extreme censorship, economic warfare, dumbing down of public education, mass depopulation efforts with deadly vaccines, the purging of conservatives from the US military and the carrying out of mass domestic terrorism by the FBI, which ran the Gov. Whitmer “kidnapping” false flag operation.

Despite all the attacks, America has a very strong military, so every effort is being made to wipe out USA military hardware and personnel. The shipping of hardware to Ukraine is only one small part of that effort, however.

The larger effort appears to be a deliberate attempt to provoke Putin into a retaliation against America’s military troops who are gathering in Poland in anticipation of a summertime counter attack against Russia. The most likely weapon that will be used in this escalation, according to our sources, is a Fuel Air Explosive weapon, also known as a “thermobaric” bomb.

A thermobaric bomb is devastating against personnel but unable to breach concrete bunkers or armored vehicles. However, it disintegrates the human body with horrifying efficiency, and it can cover a very wide area when deployed. Russia has possessed such weapons since the 1960s and has mastered their deployment.

Some people claim the following video records the deployment of a Russian thermobaric bomb in Ukraine, in early March. Although it appears to depict a mushroom cloud, there was no radiation from this blast, indicating it was not a nuclear weapon.

Observing the fact that the Pentagon is now bragging to the NYT about taking part in the sinking of the Moskva (Russian flagship), it is apparent that Biden wants to goad Russia into an escalating retaliation against NATO and the USA.

Russia’s primary choices of weapons for that escalation are:

Thus, the most obvious retaliatory weapon of choice for Putin to attack US and NATO troops stationed in Poland is the use of a thermobaric bomb.

Obama / Biden no doubt invite this because it would destroy the ranks of the US military and leave America even more defenseless against an invasion from China.

Remember: Everything Biden does is calculated by Obama to erode the defensive power of the US military, either through attrition of active duty soldiers or the disposal of US munitions. Biden’s handlers are treasonous actors who hope to bring down America and see it conquered by communists.