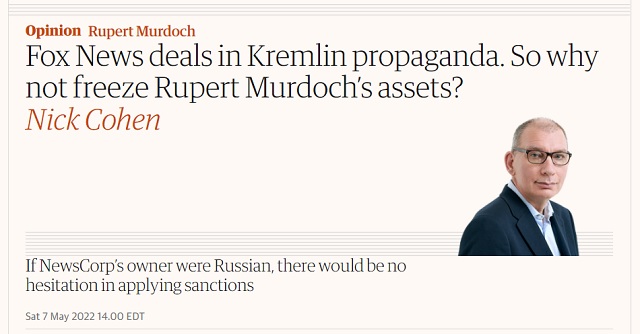 Fox News owner Rupert Murdoch should have his assets frozen for allowing Tucker Carlson to report both sides in the Russia-Ukraine conflict, so suggests Observer columnist Nick Cohen.

From The Guardian (Archive):

Fox News deals in Kremlin propaganda. So why not freeze Rupert Murdoch’s assets?

If NewsCorp’s owner were Russian, there would be no hesitation in applying sanctions

If the west could find the courage, it would order an immediate freeze of Rupert Murdoch’s assets. His Fox News presenters and Russia’s propagandists are so intermeshed that separating the two is as impossible as unbaking a cake.

On Russian state news, as on Fox, bawling ideologues scream threats then whine about their victimhood as they incite anger and self-pity in equal measures.

Cohen is an expert in that field.

The UK’s sanctions regulations include among the reasons for freezing an oligarch’s assets “obtaining a benefit from or supporting the Government of Russia”. The Biden White House promises to punish those “responsible for providing the support necessary to underpin Putin’s war on Ukraine”. On both interpretations, there is a plausible prosecution case for freezing the assets of Murdoch’s NewsCorp.

Because it is a media conglomerate, sanctions would be an attack on free speech. I say this plainly because so many writers and political actors pretend that they are not demanding censorship when that is precisely what they are doing. Nevertheless, in this case the threat to freedom is minimal. Murdoch would not be punished for revealing embarrassing truths about the west but for spreading demonstrable lies for a hostile foreign power.

Note, Cohen refuses to capitalize the West. It’s just one of the many ways he shows his utter contempt for us.

We’re now at the stage where the media is openly calling for ending free speech and sanctioning everyone who counters their narrative.