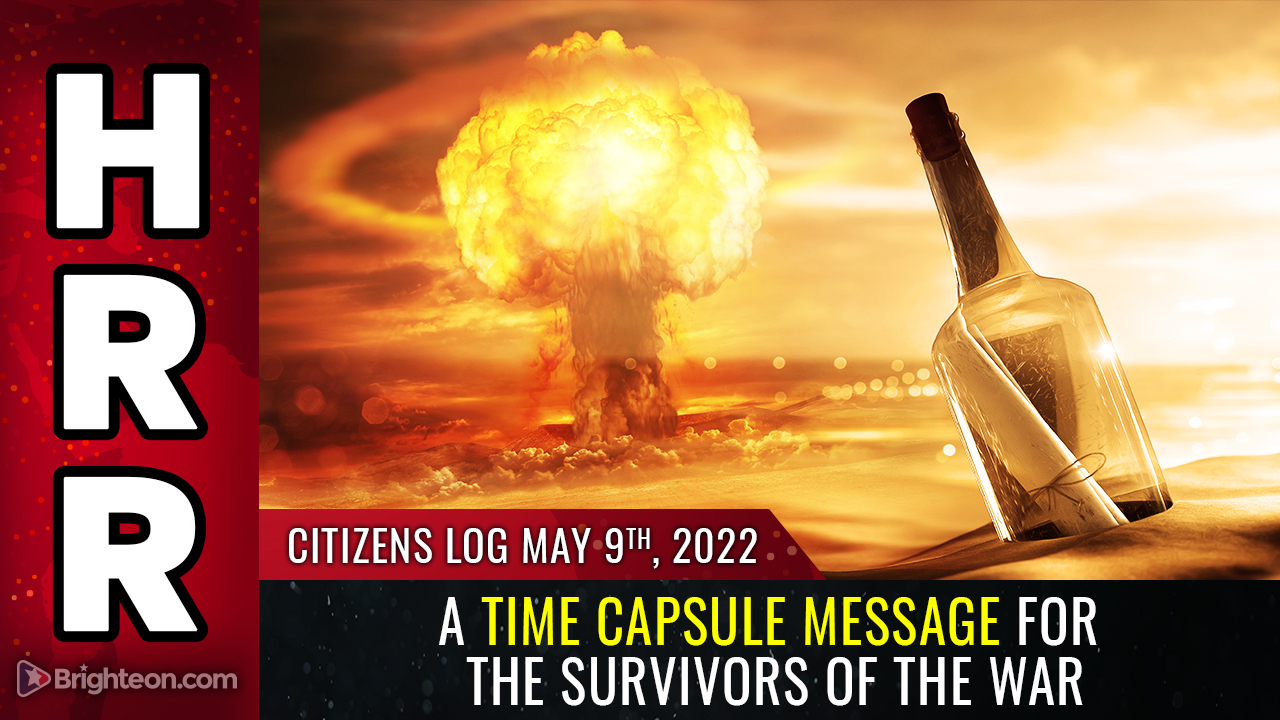 (Natural News) The Situation Update podcast, which has produced 5-6 episodes per week since November 4th, 2020 (the day after the election was stolen) is now Citizens’ Log, “A time capsule message from the present to the future survivors of the war.”

Each episode will continue to cover each day’s observations about the total collapse of Western civilization that is being engineered — and the globalist war against the human race — but now it will be presented in the context of history for those survivors who may be listening in the future. Perhaps they will be curious how human civilization committed suicide in the name of “progress.”

Each episode will be burned to audio CD (optical format, which is very resistant to physical damage) and buried in a time capsule container at a location that will be marked in a conspicuous manner that’s designed to survive global thermonuclear war. The hope is that future survivors will find the stash of audio CDs and still have the basic technology listen to them. (Audio CDs don’t use compression CODECs and can be played with rudimentary electronics, compared to DVDs or other formats.)

How the West is forcing Putin into a nuclear first strike

It is becoming obvious to many people now that the US and NATO are deliberately pushing Russia into global thermonuclear war. In classic game theory, you might imagine two scorpions in a jar, each capable of killing the other, but not before the other one can strike back, effectively killing them both. I prefer to use the analogy of two cowboys in a saloon, each with a loaded gun pointed to the head of the other. Once the USA / NATO cowboy declares that their goal is the complete destruction of Russia and that there is no common ground and no restoration of geopolitical recognition of Russia’s right to exist, it is in the interests of Russia to shoot first (and hope it can dodge the return fire).

This is the corner into which Russia is being shoved right now. We are so close to global thermonuclear war — or an EMP weapon detonation over Europe or North America — that a first strike from Russia could come any day, in mere minutes. (About 200 seconds from launch to detonation over European cities like Paris, Berlin and London.)

Yet the extreme arrogance of the illegitimate, criminal occupying enemy force in Washington D.C. — the “Biden regime” — is truly incredible. The USA and NATO act as if they are invulnerable to nuclear retaliation. They pretend that their own nations are working well, with fully-functioning supply lines and a ready workforce to produce more weapons along with a stable domestic currency to fund a war effort. Yet none of these assumptions are true. The United States of America is on the verge of collapse all by itself, with a near-collapsed culture of people who refuse to work, a collapsing supply chain and a collapsing dollar currency. To top it off, the country is being (presumably) run by a mentally incompetent dementia patient who was thrust into power through a criminally rigged (stolen) election in 2020.

Democracy is dead in America, and free speech has been all but outlawed. Money is becoming worthless, and both food inflation and fuel prices are skyrocketing by the day. America stands on the verge of domestic civil war, yet the insane, arrogant American leaders think they can bludgeon Russia into compliance by talking tough and threatening economic sanctions? It reminds me a lot of Joe Biden’s contrived story about how he stood down a gangster named Corn Pop, invoking his usual (and hilarious) tough guy act that nobody believes. A similar swagger in U.S. State Dept. officials is also laughable. The US military has no real capability of defeating Russia in actual combat, especially given the fact that America’s F-35 fighters barely function even in peacetime.

The United States of America is now little more than a hollowed out husk of its former self. All it took was a few decades of treasonous Clintons, Bushes and Barack Obama to pull it off.

Meanwhile, Zelensky has ordered his Ukrainian troops to “hold the line” at any cost. The cost will be high, of course, since that order makes them sitting ducks for Russia’s highly effective artillery. By some accounts, Russian artillery is out-gunning Ukrainian artillery by a factor of 100 to 1. From DigitalJournal.com:

On the ground, there are roughly 40,000 to 50,000 Ukrainian soldiers in the Donbas, analysts say. Moscow has not said anything about its forces in the area.

“It’s too late for us,” said one Ukrainian soldier, who was struggling to repair a broken-down tank he said was used in the Soviet-Afghan war (1979-1989).

Although they are holding their ground on the battlefield, many of Ukraine’s infantry soldiers admit to feeling overwhelmed.

“Viking”, a 27-year-old staff sergeant who fought in Kreminna said his comrades are exhausted and waiting for the order to pull back.

“If it was a war between infantry forces, we would have a chance. But in this area, it’s first and foremost an artillery war and we don’t have enough artillery,” he says.

The order to “hold the line” is suicide when the line is being heavily barraged by Russian artillery, it turns out.

Russia has perfected its method to kill Ukrainian soldiers: 1) Use drones to identify fixed enemy positions, 2) Hit them with nonstop artillery to produce 75% (or so) casualties. 3) Send in the tanks for the cleanup. If that doesn’t work, rinse and repeat.

From CSmonitor.com, a similar story emerges: (despite the lying left-wing media’s attempts to somehow keep claiming “Ukraine is winning!)

“Their artillery never, never stops,” says the deputy commander of Ukraine’s Donbas Battalion, a major who only gave the nickname Kot (Cat). He spoke in Sloviansk with a balaclava covering his face, as an air raid siren wailed across the city.

“They are sending recon units, then shell with artillery, and then send tanks,” he says. “If those tanks are destroyed, they send more tanks.”

“We really have a lack of heavy artillery,” says Ukrainian Sgt. Viktor Davydov, still wired and speaking quickly of Ukraine’s needs, after returning to the town of Druzhkivka from the front, where he says Russian artillery strikes continue “24/7.”

“When Russia sends incoming 200 shells, we send back 10 shells,” says Sergeant Davydov, who wears sunglasses, a pistol on his thigh, and a skull shoulder patch in the blue and yellow colors of the Ukrainian flag.

“I tell them that all they have to do is hold our line, and not retreat,” says Sergeant Davydov. The cost can be high. The sergeant recalls 10 recruits in late April being sent to him one night at 11 p.m. By 6 a.m. two were dead and three wounded by Russian artillery.

Imagine that. A 50% casualty rate in six hours. That’s the cost of Zelensky telling his soldiers to “hold the line” in the face of Russian artillery.

No doubt, NATO troops will be chewed up in precisely the same manner, as NATO is also too stupid and arrogant to engage in anything resembling sustainable tactics on the battlefield.

What happens when Ukraine runs out of troops? Nothing good…

Right now, Russia is focused on eliminating Ukrainian troops rather than actually gaining territory (except in the south, where Russia is gunning for Odessa). Because Russia knows that once Ukraine runs out of troops to keep trying to use NATO weapons, NATO will finally have to send in its own pathetic snowflake troops.

NATO troops are snowflakes. They’re weak and soft, much like the US military leadership which is more concerned with supporting transgenderism surgeries for troops rather than training men how to fight like men.

NATO is no match for Russia’s military might. It’s not even close. That’s not to even mention the fact that Russia could fire a single EMP weapon and plunge all of Western Europe into the Dark Ages. On top of that, Russia has underwater nuclear drones already positioned off the coasts of the UK and USA, ready to receive satellite commands for detonation. This would unleash a radioactive tidal wave and utterly obliterate coastal regions, making them uninhabitable for three centuries. Consider what occupies the US East Coast: Washington D.C., Norfolk naval bases, New York City (and Wall Street), Boston and so on. Imagine the shock to America if these cities were all drenched in radioactive sea water, all at the same time.

Even without such a maneuver, Western Europe is destroying itself through economic suicide — all stemming from the ludicrous and idiotic “climate change” hoax — so all Putin has to do now is wait for the coming winter and watch Germany, France, Poland and the UK freeze to death (or starve, or close down their industrial base, or perhaps all three). The US, similarly, is printing its way to financial oblivion while the nation’s culture plunges into abject lunacy and incomprehensible behavior on the part of the political Left. Gone are the days of rational debate, evidence-based accusations and functional logic. It’s all been replaced with mindless screaming, violence and hate against everything that is good.

The radical Left have become incomprehensible, intolerable lunatics who are 100% incompatible with sustainable civilization.

Get the full warning in today’s Citizens’ Log episode via Brighteon.com: