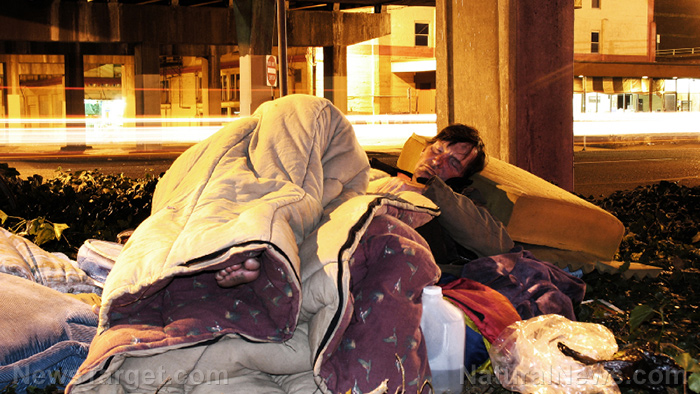 (Natural News) Thousands flock to the Disney World theme park in Florida every year to visit the “happiest place on Earth.” But on the way to the park, thousands also wake up to the reality of homelessness every single day.

The Daily Mail spoke to some of these individuals, who live in the numerous motels that line U.S. Route 192 that passes by the theme park. Those unable to stay in motels resort to living in bus shelters or in their own vehicles. Regardless of where they live, all of them fell on hard times as a result of the Wuhan coronavirus (COVID-19) pandemic.

Demarco Jones, 40, moved into a room at the Paradise Inn motel with his 32-year-old partner Monica Garcia and his five young children. The forklift truck operator was forced to stay there after he lost his three-bedroom apartment in Winter Park – located 25 miles away.

“My hours were cut [during the COVID-19 pandemic] and that forced me into debt. I got badly behind with my bills and, when my hours returned, I had so much to catch up on – [that] it was almost impossible,” said Jones. “I had a nice apartment – three bedrooms, two bathrooms – and I paid $1,300 a month. But I had to leave, no choice.”

“This is obviously not how I want to live; it’s not what I want for my kids. My plan is to get out. [If] I’ve got some momentum, I’m going to try for an apartment.”

Steve Rumph, 50, is now living in his car following a short stay at the Paradise Inn. His 2006 Lincoln Town Car, which he now calls home, has all his belongings. Rumph moved to Florida from New Hampshire with his girlfriend.

“I had stayed at the Paradise Inn, but I was disgusted with my room. There were cockroaches everywhere, mold on the bed and large stains on the mattress. There were even large gaps under the door where lizards or spiders or anything could come in during the night,” he recounted.

“They gave me what they called the ‘cheap’ rate of $1,200, but it was a waste of money. I feel comfortable in my car. It’s a nicer place to be than a motel like that. I had no choice; it was live in the car or nothing. I’d lost everything.”

Rumph said his girlfriend went to a homeless camp as she did not want to live in the car with him. While the 50-year-old lives on disability benefits – thanks to a serious leg injury – he has resorted to selling his own blood plasma for $800 a month.

Help comes unexpectedly for the homeless near Disney World

Clifford Morley, 64, and his wife Genny, 53, moved to Florida from Ohio after she suffered a stroke and wanted to be in warmer weather. After losing their deposit and hotel room due to travel delays, the Morleys moved to the Orlando International Airport but were repeatedly kicked out by staff. They then headed to downtown Kissimmee and slept at bus stops – a far cry from their old life of owning a small house. (Related: It is now illegal to share food with the homeless in Florida.)

“We were terrified [and] really frightened for our safety. We cried, because living on the street … [is] not fun. We were devastated to be homeless and living at a bus stop. It’s frightening; we felt like we were never going to make it,” Morley said.

He eventually sought help from the Osceola Christian Ministry Center, which introduced him to Barbie Austria of Kissimmee-Poinciana Homeless Outreach. Austria, 61, has dedicated the past 18 years to helping homeless Americans in the area. The Morleys managed to find decent living quarters thanks to her help.

“Clifford is a perfect example of the forgotten Americans who are facing homelessness here right now. No one his age should die on the street, especially veterans,” said Austria, who survived the events of 9/11.

“Really, there are thousands. I’m not exaggerating. We have some that just stay in the woods, people in the streets, and then people in motels,” Austria elaborated. “But the motels are now expensive, so they will probably stay a week and then they are back out in their car or on the road.”

According to her, motels only require an ID card and money – which homeless people have an easier time procuring.

“During the pandemic, when there was the rent freeze, people just stopped paying their rents and it ruined their credit. Their credit rating dropped dramatically, and that is something that counts against them because you must have a credit score of 640 or higher to rent,” she said.

“The criteria to get into housing is so difficult. You have to make three times the income of your rent. You have to go through criminal background [checks]. No bankruptcies allowed; if you are in debt collection, you are not allowed. Often, they can find no way back.”

Watch this video about Afghan refugees given subsidies to purchase homes as many Americans become homeless.

This video is from the GN4GNtv channel on Brighteon.com.

Facebook employees are HOMELESS and living out of their own cars.

COVID-19 takes hold among the homeless in Los Angeles.