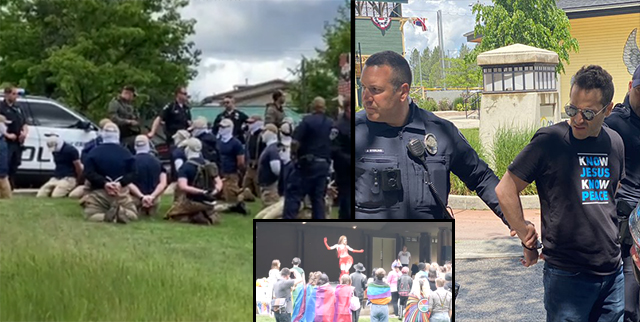 Idaho police in Coeur D’Alene appear to have been working with the feds and undercover informants to stage a mass arrest of Patriot Front members and Christian preachers for protesting an “LGBTQIA+ Pride” event targeting children in Idaho on Saturday.

Very exciting drag performance by Mona Liza Million in Coeur d'Alene, #Idaho in front of some of the many children in attendance at "Pride In The Park."

There seems to be some issue over the dollar bills between the MC, the kids and this performer. "Get your money girl." pic.twitter.com/mS0h9m6Vjj

One Portland #Antifa member was arrested in Coeur d'Alene, ID in addition to 31 Patriot Front members. The Antifa member who crossed state lines appears to be Robert John Stoms (dob 10-28-88), charged w/fighting & drug crimes. Antifa have been crowdfunding cash for their comrade. pic.twitter.com/PgddCKR2gb

street preacher was just arrested on a different side of the park. unsure why, i’m hearing trespassing? pic.twitter.com/00ikGigNGi

Remember how police put snipers on the roof to target protesters outside a Drag Queen Story Hour event in Spokane, Washington?

Imagine if they used this level of force in defense of all the businesses burned to the ground by BLM/Anfita rioters during the Summer of Floyd.

Police in northwest Idaho arrested more than two dozen members of a white nationalist group on Saturday and charged them with planning to stage a riot near a LGBTQ pride event, authorities said.

A local resident spotted the men, wearing white masks and carrying shields, getting into a U-Haul truck and called police, telling the emergency dispatcher it “looked like a little army,” according to White. Police pulled the truck over about 10 minutes after the call.

Video taken at the scene of the arrest and posted online showed about 20 men kneeling next to the truck with their hands bound, wearing similar khaki pants, blue shirts, white masks and baseball caps.

Police recovered at least one smoke grenade and documents that included an “operations plan” from the truck, as well as shields and shin guards, all of which made their intentions clear, White said.

“They came to riot downtown,” he said.

Those are all tools for self-defense. Nearly all their street protests are attacked by antifa.

In the past week, the FBI also arrested the leading Michigan GOP candidate for Governor, Ryan Kelley, as well as former Trump advisor Peter Navarro. The DOJ charged five Proud Boys with sedition. Wray is actively purging the FBI of right-wingers who won’t go along with the program.

🚨 LATE BREAKING: New whistleblowers allege the FBI is “purging” conservatives at the Bureau.

One agent? A decorated war veteran who served in Iraq and Kuwait.

The FBI had the audacity to question the whistleblower’s loyalty to the country! pic.twitter.com/5yCCIp20MQ

All these made for TV arrests are going down right as the Jan 6th Super Show Extravaganza is being broadcast on every major TV channel — perfectly timed to prop up the regime’s fake “insurrection” narrative and hype “white extremists” as America’s greatest threat.

The same way the FBI manufactured the Gov. Whitmer kidnapping plot then timed the arrest of everyone involved as an October surprise right before the 2020 election they’re now rounding up their political opposition to try and breathe life into their failing “insurrection” hoax.