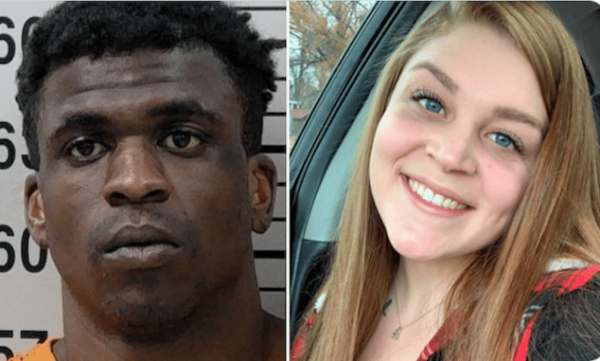 Honest question: is there one, just one example of a white guy killing his black girlfriend/ex-girlfriend? Asking for a friend… [Pregnant woman beheaded by ex-boyfriend just more than a month before due date, NY Daily News, June 15, 2022]:

An Illinois man has been arrested for allegedly decapitating his pregnant ex-girlfriend, whose head was discovered in a dumpster just more than a month before she was slated to give birth.

Deundrea Holloway has been charged with two counts of first-degree murder — for the slaying of Liese Dodd as well as her unborn child — intentional homicide of an unborn child and the dismemberment of a human body among other crimes, Alton Police Chief Marcos Pulido said in a video statement shared on the department’s Facebook page.

He called the 22-year-old suspect a “monster” who killed his former girlfriend at the end of their relationship, which had been on and off for about two years.

Dodd’s mother, Heidi Noel, discovered her daughter’s remains on Thursday, just weeks before a baby shower planned to celebrate her pregnancy. She became worried when she was unable to contact Dodd, so she went to her apartment in Alton to check in on her.

“What was observed, what was learned, what was found, is absolutely terrible,” the chief said. “She was decapitated by a freaking savage monster.”

Holloway, who does not appear to have a record, was being held Wednesday on $2 million bail, according the St. Louis Post-Dispatch.

Dodd, who was mulling a career in the medical field, had a due date of July 27. It would have been her first child.

“She was just a bright light that cared for everyone,” Noel told KMOV. “She had a big heart. She’d do anything for anyone. She’d go out of her way to help people.”

These stories are grotesque, but is there one, just one, example of a white guy killing his black ex-girlfriend? Just one?

Asking for a friend.