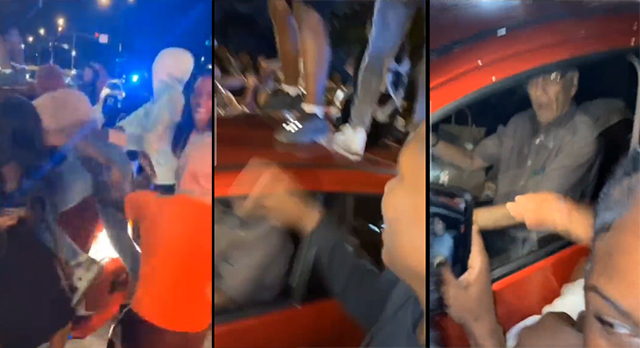 Viral video purportedly out of Chicago on Friday night shows a giant mob of black youths swarm an elderly white man’s car, climb onto his roof and start jumping and twerking on it to cheers.

I can’t find the source video but a Google image search shows no results before Saturday. The incident allegedly happened on Friday night.

The look on the man’s face is truly priceless.

This is the new normal in Chicago.

Every weekend giant mobs like this form and run wild in the streets.

This video is from last month:

These are from the past week:

Just in: Alarming video shows a group of young people assaulting a man in the middle of Clark Street near North Avenue this evening.https://t.co/3wHqjphG8S

We saw similar last summer happen to a cop in a police cruiser.

Looks like the Chicago Police Department's emphasis on "positive community interactions" is taking off! Great to see! pic.twitter.com/xuHMWsuYci

According to the media, these folx are living in constant terror of “white supremacy” and “white police” who could kill them at any moment for any reason simply for the crime of being born black.