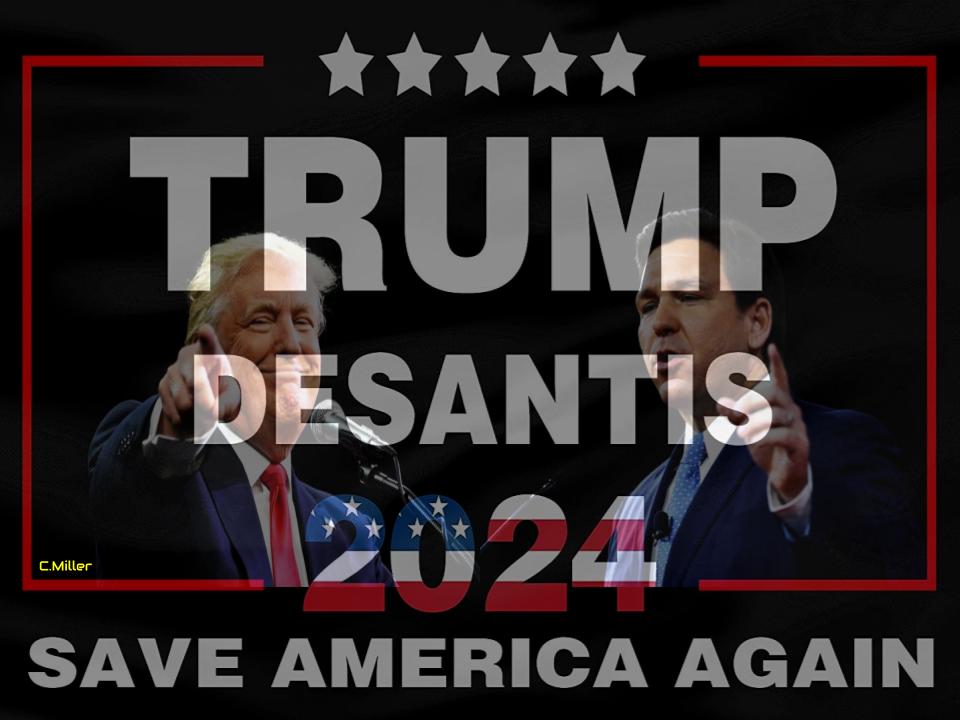 As this waking national nightmare installed in the people’s White House that none of us Americans are able to wake up from continues in its unrelenting march to mutilate, disfigure and destroy virtually every aspect of our collective society and way of life, more skeletons have recently emerged from their place of concealment inside of Joe Biden‘s closet of twisted and depraved family secrets.

As the smoke settles over the numerous food production facilities across the country which have since burnt to the ground and as the thousands of heads of cattle in Kansas that inexplicably all dropped dead recently are being bulldozed away, compounding this supply chain interruption we as a nation are all suffering the fallout from, now we learn Joe Biden’s past proclivities of interacting with his children included him taking showers with his hyper-sexualized, nympho daughter, Ashley Biden. This nauseating detail was revealed in Ashley’s own words from a diary allegedly having belonged to her which has managed to make its way (much like her brother Hunter’s laptop) into the national spotlight. 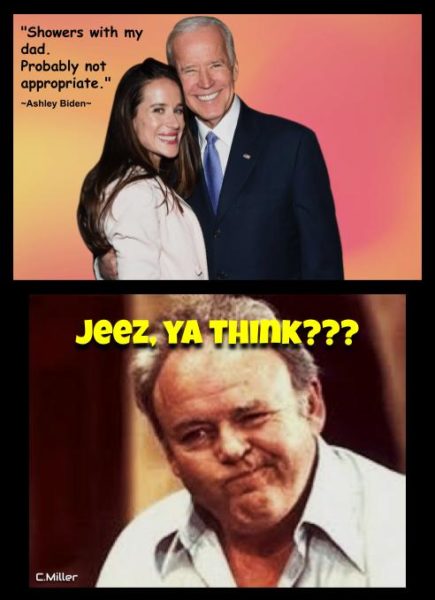 Apart from that throwing up in your mouth a bit sensation that’s just the natural, adverse reaction of normal people to abnormal crap like this, when you remember every deranged, demented, deceitful thing these actual purveyors of perversion on the Left (whom I consider as being the true insurrectionist threat against our Republic) have harassed, persecuted and accused president Trump of since the day he descended the escalator in Trump Tower to announce his candidacy for president of the United States back on June 16th, 2015, you probably also felt a renewed sense of intensified outrage at the grotesque hypocrisy of these bottom feeding locusts chomping away at the foundations of our great Republic. I don’t think there are any words left in our English vocabulary to even describe, much less encompass, the absurd insanity we’re inundated with on a daily basis by these deranged lunatics. 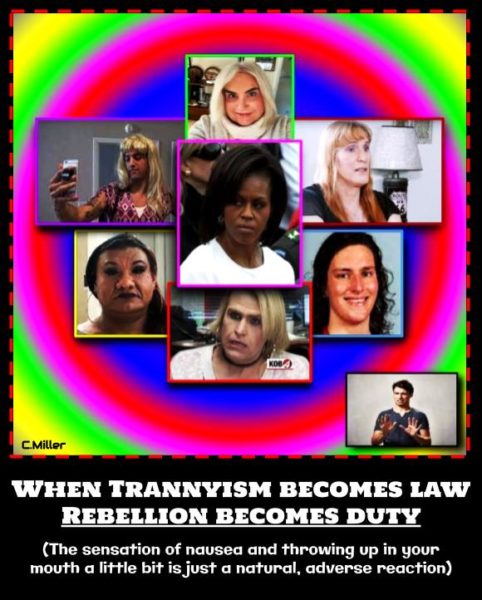 If anything, its only reaffirmed my personal belief that we need to make insane asylums, padded rooms, Thorazine and straight jackets great again for these fruitcakes. I mean we’ve rocketed way past the boundaries of the Twilight Zone and Outer Limits here. Apparently it’s not enough that creepy Joe recently threatened to withhold billions in federal funding to any schools lunch program that refuse to comply with his administrations mandate to peddle the policies of this alphabet soup organization of confused gay people and Tranny’s. Seeking to make the warped policies of these morally bankrupt degenerates a part of our education systems national curriculum, trickling down their gutters and straight into the classrooms of preschoolers. There simply are no words for this brand of deviancy anymore that wouldn’t be better articulated by the enforcement of our 2nd Amendment rights against these predators.

No Free Lunch: Biden Admin Will Pull Meal Funding for Schools That Don’t Comply With Its LGBT Agenda

And as revealed in the following age-restricted YouTube video dated all the way back to 2012, exposing Planned Parenthood’s role in targeting school children, titled 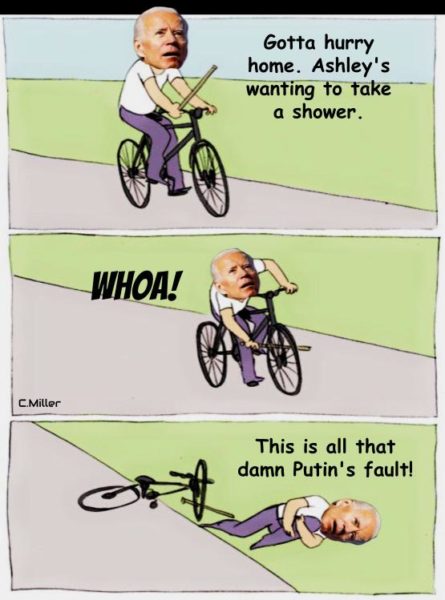 All these years of radical Leftists overseen by the Democrat Party assaulting our collective definition of what we know is “normal” as our collective definition continues onward in this unimpeded, precipitous decline and slide right off the cliff, with these various flavors of the week Republican politicians we’ve looked to in the past before 2015 BT (“Before Trump”), we see with the benefit of hindsight now, never did anything substantive to really put a stop to any of it. In some cases we have these RINO’s today who are colluding with Democrats to help advance this cancer. They’ve become so emboldened and brazen they’ve stolen a national presidential election away from us and installed a corrupt pervert who would take showers with his own nympho daughter and who can’t even ride a bike without becoming a global embarrassment to our country. Let that sink in if you can stand it. 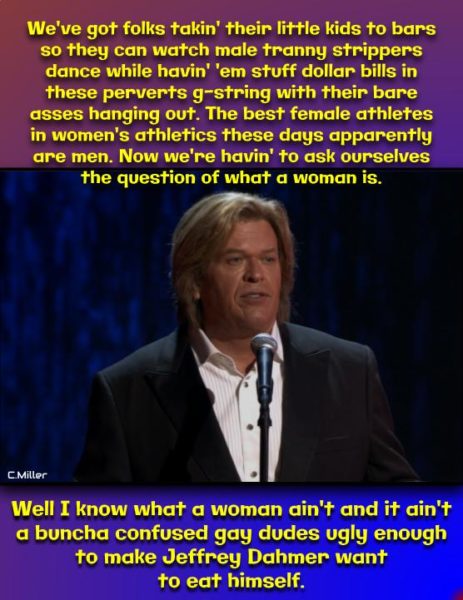 I imagine Biden’s probably wandering around the White House licking an ice cream cone in fuzzy bunny slippers during his evening hours, confused and getting himself stuck in broom closets as the aggressive dementia we all know he’s suffering from gnaws away at his brain like a rat eating cheese. As too many Republicans are vowing reform for voter integrity and election security in all future elections, they fail to understand that if they refuse to address what happened in the 2020 election, then they may as well just shut the hell up and sit down. 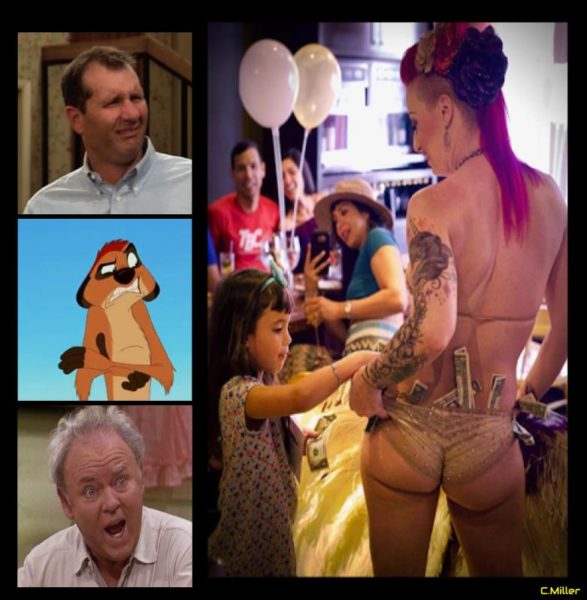 In summary allow me to add that we have parents in Dallas, Texas taking their own little children to bars to watch Tranny’s dance and put money into the g-strings of these amoral screwballs, with their bare asses and God knows what else hanging out. With parents in attendance, sitting at tables grinning like hyenas and taking selfies with their phones. Do the words “Sodom and Gomorrah” ring any bells? 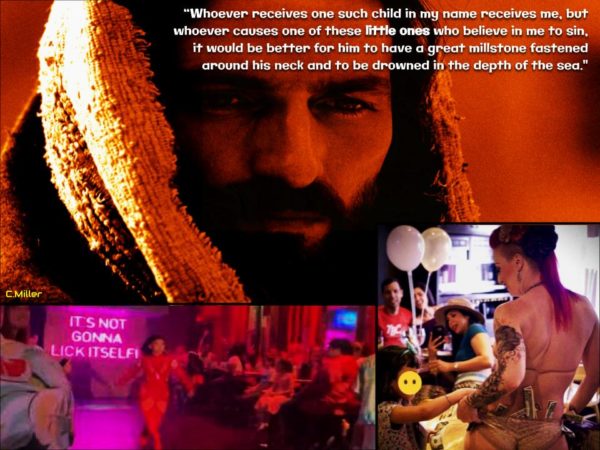 With this and so much else diabolical in nature over these last few decades we’ve permitted to be foisted on us as a people, allowing to permeate our culture and society, is it any wonder then as this cascading tsunami of unmitigated crazy and upheaval sweeps our country, that it feels as if we’ve deservingly come under God’s judgement now?

I mean it appears obvious to me anyway. I’m certain too that I’m far from alone in this assessment. 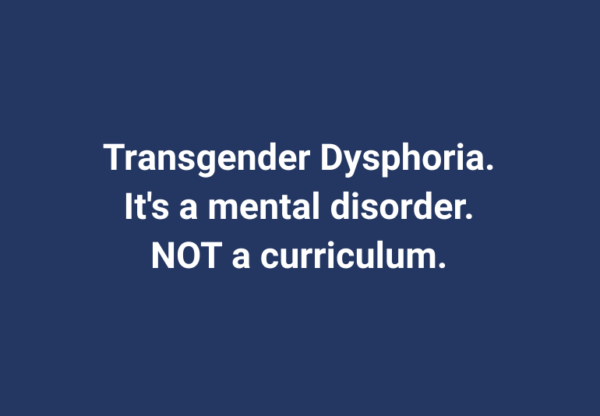 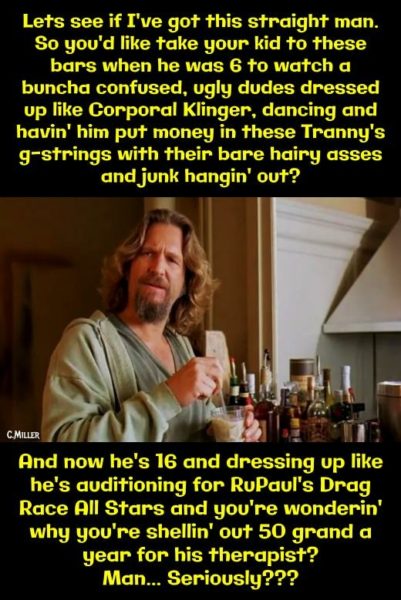