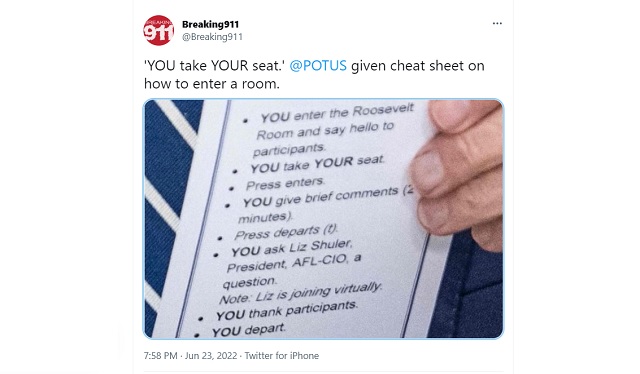 White House Resident Joe Biden on Thursday was pictured holding a cheat sheet given to him by his handlers instructing him on how to enter a room, sit down and “say hello.”

'YOU take YOUR seat.' @POTUS given cheat sheet on how to enter a room. pic.twitter.com/AVG4Fkp6SS

Biden’s instruction sheet tells him exactly what to do, what to say, who to say it to, and so on. This man is a puppet. pic.twitter.com/MQdMmS7uPj

“YOU enter the Roosevelt Room and say hello to participants,” the cheat sheet’s bullet points read. “YOU take YOUR seat.”

How mentally out of it is this geriatric patient that he needs to be told to sit down and say hello? Klain, Garland and Alejandro Mayorkas are using this geriatric as a human shield to carry out all their revenge fantasies against America and they’re going to throw him in the garbage just like Andrew Gillum once they’re done with him.

He’s already the least popular president in American history and yet they just continue to use and abuse him for all he’s worth.

The sellouts running the GOP have even had to step in to prop up his failing presidency!