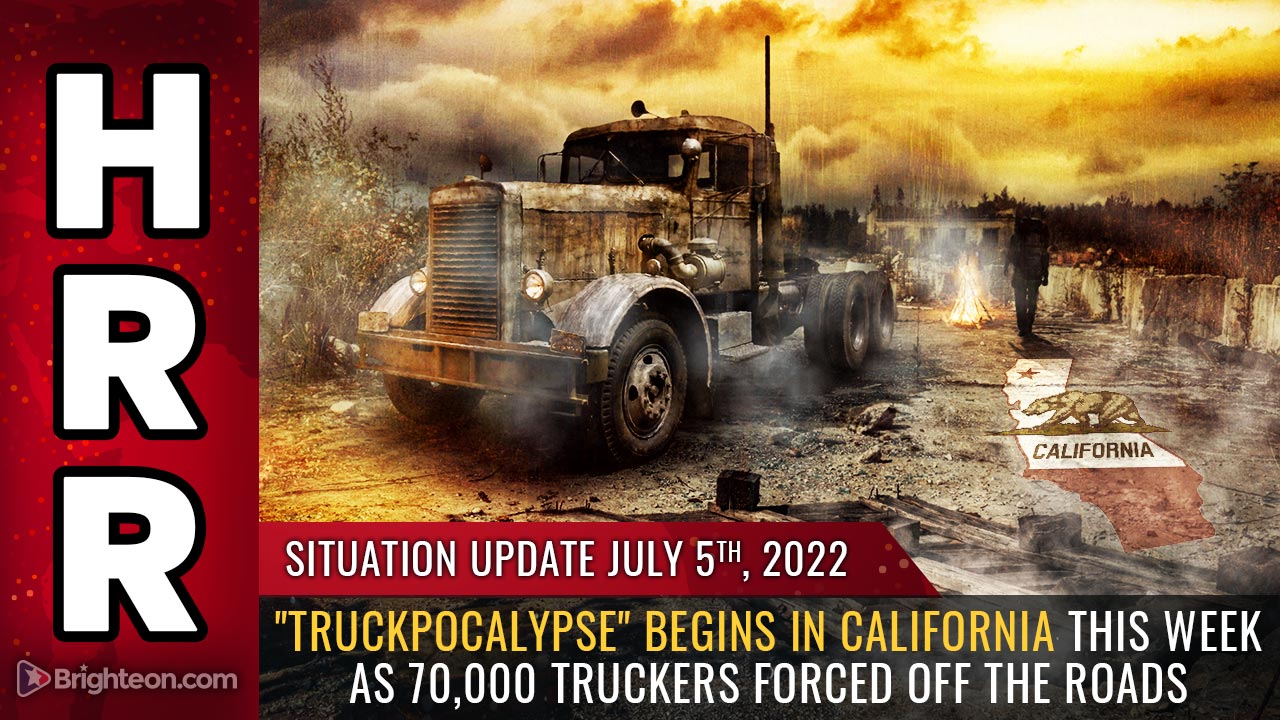 (Natural News) The California Truckers Association is warning that 70,000 independent truck owner-operators will be taken off the roads of California later this week as a draconian new law, “AB-5” kicks in: (emphasis ours)

In addition to the direct impact on California’s 70,000 owner-operators who have seven days to cease long-standing independent businesses, the impact of taking tens of thousands of truck drivers off the road will have devastating repercussions on an already fragile supply chain, increasing costs and worsening runaway inflation.

The new law, passed and signed by Democrats, essentially outlaws independent contractors from operating transport trucks in the state of California. When it goes into effect later this week — after the US Supreme Court refused to intervene last week — California will be hit with a “truckpocalypse” shutdown of transportation capacity.

While some transportation companies maintain full-time employees to operate long haul rigs, many drivers are “owner-operators” who own their own trucks and who pick up contract jobs from the hundreds of shipping and transport companies that operate in California. These owner-operators pay their own taxes, buy their own health insurance and cover their own fuel costs. California Democrats, however, think that independent freedom for truckers should be criminalized, since they want all drivers to be union workers in corrupt union organizations that Democrats routinely use for money laundering operations (dems vote to award public money to the unions, and the unions agree to kick back campaign donations to Democrats).

So they’ve outlawed independent contractors in the trucking industry. The new law goes into effect this week and is expected to cause widespread logjams, cost increases and delays to transportation across America. Say hello to accelerated food inflation…

Catastrophic collapse of trucking and transportation in California

As FreightWaves.com reports, the implications of this law will be nothing short of catastrophic for transportation infrastructure in and out of California:

Matt Schrap, the CEO of the Harbor Trucking Association, which represents drayage companies, issued a brief but harsh statement in response to the high court’s decision.

“It is extremely unfortunate that this Court couldn’t see through their own political agenda to identify the obvious preemption that exists under the F4A,” he wrote in an email to FreightWaves. “This ruling will have far reaching impacts that will upend the industry as we know it. Tens of thousands of truck drivers will be driven out of established business relationships within a week. No doubt this will further stress the supply chain.”

Not only do transport trucks carry food and consumer goods in and out of California, they routinely distribute ocean freight containers from California ports to inland destinations. The containers move from ships to trucks, and those trucks take them to retail distribution hubs or domestic manufacturers for offloading.

Under California’s new AB5 law, the logistics challenge of receiving good carried by road are going to be a nightmare. Added to this is the fact that Union Pacific railroad is already slashing the number of rail cars it carries for existing customers (such as CF Industries, a fertilizer manufacturer), which means railroads have no excess capacity to pick up the slack from trucking.

America’s logistics infrastructure is crumbling. And with diesel engine oil additives in short supply and expected to run out in about 7 weeks, a huge question looms over America: How will food, coal, spare parts and consumer goods get delivered anywhere? If the truckers are blocked from California’s highways, and diesel engine oil is running out, and railroads are slashing rail cars, and diesel fuel itself is running out in some areas, the scenario for the second half of 2022 doesn’t look very rosy at this point.

And preppers are the new geniuses.

Get more details on all this and much more in today’s Situation Update Podcast: