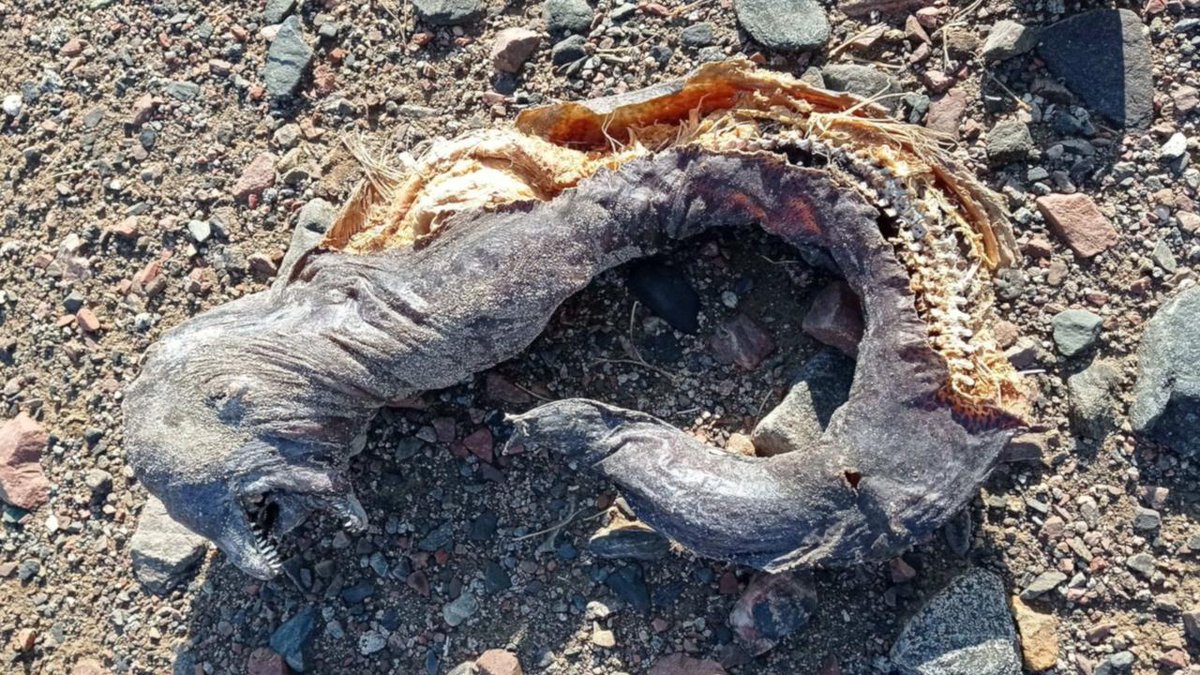 Have you noticed that there have been a lot of stories about “unexplained creatures” in the news lately?  Normally I don’t pay much attention to stories like that, but today my curiosity got the better of me and I decided to do some digging.  What I found was that stories about mystery creatures have been going viral on social media with surprising regularity.  In some cases, the mystery creatures are able to be identified, but often they are not.  In this article I am going to be asking a number of questions, because right now I don’t have all the answers and that is okay.  Our world is full of great mysteries, and for many of those great mysteries there are no easy answers.

Let me give you an example of what I am talking about.  Last week, an extremely bizarre creature that “looks like an orc from Lord of the Rings” washed up on a shore on the Sinai Peninsula…

The gruesome remains of a creature that ‘looks like an orc from Lord of the Rings’ have been found washed up on the shores of Egypt.

Andrea Jud, 39, found the mysterious eyeless corpse baring its sharp teeth on a beach at Gabr el-Bint on the Sinai Peninsula.

And just like the movie monster from Alien, it had two sets of jaws – one within the other – for hunting its prey.

I initially thought that the creature was quite small when I first saw the photo of it, but the woman that discovered it says that it had a head that was “bigger than her fist”…

Ms Jud said she was “surprised” by how big the creature was, with the head being bigger than her fist.

“It was gruesome to look at, and reminded me of the reality of death,” she said.

“My initial impression was that it was a being who suffered a rather horrible death. I couldn’t figure out what kind of creature it was.”

Some are suggesting that this creature could be some sort of an eel, and maybe that is true.

But it definitely looks like something out of a science fiction movie to me.

Here in the United States, officials at the Amarillo Zoo are asking for help in identifying a mystery creature that was recently photographed by one of their motion-activated cameras…

A mysterious image of a strange unidentified creature taken outside of Amarillo Zoo in Texas has left city officials and internet users baffled.

The City of Amarillo has appealed for help after security cameras picked up the unsettling figure apparently walking around the perimeter fence of the zoo in the early hours of May 21.

The camera that took the photo is motion-activated and sends an alert to zoo officials when it makes a capture. The model is believed to be a SPYPOINT Link-Micro-S-LTE.

Many news outlets decided to describe this strange figure as a “wolfman”, and the story quickly went viral on social media.

The Amarillo Zoo captured a strange image outside the zoo in the dark and early morning hours of May 21 (around 1:25 a.m.). Is it a person with a strange hat who likes to walk at night? A chupacabra? Do you have any ideas of what this UAO- Unidentified Amarillo Object could be? pic.twitter.com/86Ly9ogtBT

Obviously, the being in the photograph is able to walk.

So it is entirely possible that it could be a person with a very strange hat.

And it is important to note that the creature was photographed outside of the zoo fence.

So that would rule out anyone or anything inside the zoo.

Of course there are many, many instances of security cameras documenting things that we simply cannot explain, and we may never be able to fully explain this incident either.

And there is nothing wrong with that.

Often some of the strangest creatures that we encounter come right out of the ocean.

Just recently, a professional fisherman in Australia caught a truly bizarre creature that is really frightening to look at…

Professional fisherman Jason Moyce, who goes by the moniker Trapman Bermagui on social media, reeled in the mystery monster off the coast of his Bermagui hometown, about 240 miles south of Sydney. He shared a photo of the beast on social media asking for help identifying it, as both he and the captain of the charter boat had no idea what the fish could be.

It appears a mottled pink-gray, like something out of Stranger Things‘ Upside Down. Its eyes bulge out the sides of its head, and its huge mouth, which takes up most of its face, contains rows of sharp teeth. The fish can be seen to still have the bait fish inside its mouth.

One expert says that he thinks that it could be an anglerfish, and he might be right.

Perhaps all of these sightings are just the result of simple misunderstandings.

But we definitely seem to be living at a time when nature itself is going crazy even as our society as a whole is increasingly starting to spiral out of control.

For instance, in recent days it has been reported that farms in the western United States are being ravaged by “truly biblical swarms” of cannibalistic insects…

On top of a worsening drought and rising temperatures, farmers across the Western third of the United States are battling outbreaks of cannibalistic insects that are ravaging crops from Nevada to Montana. Officials have spent millions of dollars over the past few years trying to control the explosive swarms of Mormon crickets that are responsible for destroying swatches of crops from Nevada to Montana.

Native to North America, Mormon crickets got their name in the 1800s when these giant insects ruined the fields of Mormon settlers. These insects are not true crickets; they are actually shield-backed, short-winged katydids that resemble fat grasshoppers that cannot fly, according to the University of Nevada, Reno’s College of Agriculture, Biotechnology and Natural Resources.

That is a really weird story.

But this is really happening.

When I was growing up, the world around me seemed so stable and so “normal”, but now really crazy things seem to be happening on an almost daily basis.

Unfortunately, what we have been through so far is just the beginning.

I expect global events to accelerate even more in the months ahead, and many things that would have once been unthinkable will soon be reality.

So don’t be too sure that you know all the answers, because things will soon happen on this planet that will greatly shake up all of us.