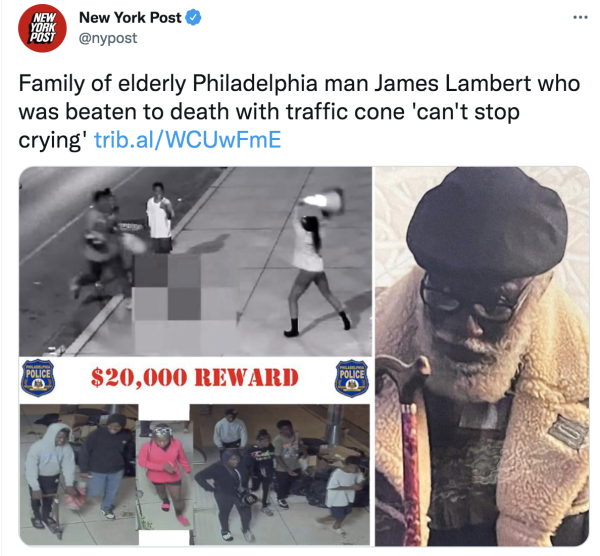 Mirror, mirror on the wall, if Black Lives Matter, why did seven underage black kids murder a 73-year old black male with a traffic cone in Philadelphia after all? [Philadelphia teens beat 73-year-old man to death with traffic cone, in attack caught on video: police: The victim was repeatedly struck by a traffic cone as the group of teenagers looked on an laughed, Fox News, July 10, 2022]:

A group of seven teenagers attacked and killed a 73-year-old man in Philadelphia last month with a traffic cone according to video footage released by the Philadelphia Police Department Friday.

Disturbing footage of the incident, which occurred on June 14, shows a group of apparent teenagers pursuing the victim identified as James Lambert down the 2100 block of Cecil B. Moore Avenue in the city’s northwest corridor.

The video shows Lambert attempting to walk away from the group at around 3 am.

The teens then followed the 73-year-old across the street before one of the male assailants attacked him from behind by striking him with a traffic cone.

The blow knocked Lambert to the ground at which point one of the group’s females picked up the cone and hit him with it again with it.

The incident was filmed by other members of the group who also appeared to be smiling and laughing throughout the attack. Though one of the females appeared taken aback by the incident and held her hands over her mouth in a gesture suggesting shock.

The footage showed Lambert appearing to get up to flee the area before he was struck again with the cone by the same female assailant.

The teenagers then left the scene as one of the males pedaled away on a scooter smiling with another male companion.

The police said Lambert was taken to the hospital where he succumbed to his injuries the next day.

None of the assailants have reportedly been arrested yet and all seven of the individuals present during the incident are wanted by the police.

The police have offered up a $20,000 reward for information on the individuals who have been described as “four Black males and three Black females who appear to be in their early to mid-teens.”

Smiling and laughing throughout the assault, leaving a septuagenerian black male dead.

This is exactly what the Founding Fathers intended for America when they signed the Declaration of Independence and the US Constitution.