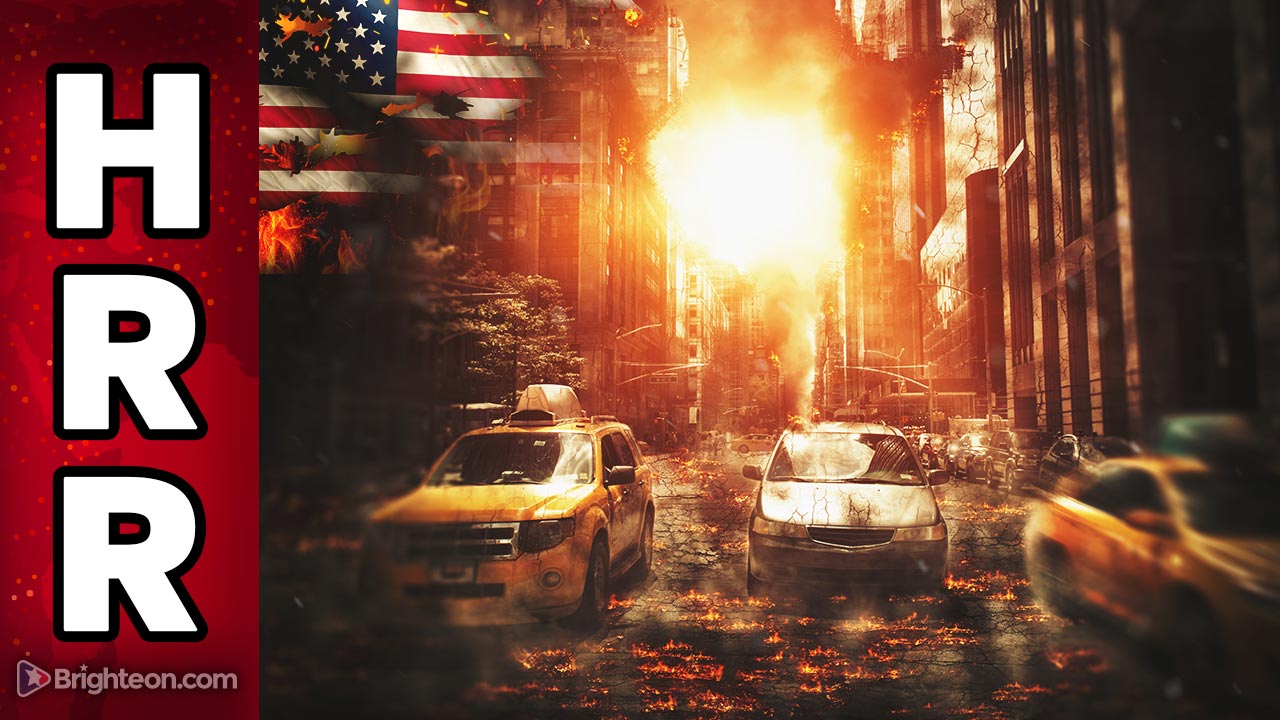 (Natural News) New York City has released a new public service announcement video that advises residents what to do after a nuclear strike on the city. The laughable video almost appears to be a Babylon Bee parody, as it offers residents what can only be described as a “suicide checklist” for dying in a nuclear attack. (See video below.)

The joyfully-presented video advises residents to go into buildings and undress, then shampoo and use soap to wash themselves off. Once done, residents are told to stay indoors until directed what to do by government media sources. Sounds like a quick way to die…

This advice presumes that buildings will still be standing, that running water still works and that the internet and media broadcast stations are all up and operating. These assumptions are absurd.

As the following blast radius map from NuclearSecrecy.com reveals, just a 1 megaton nuclear strike would produce a fireball (the yellow zone) that engulfs most of Brooklyn, Harlem, Bayonne, the West Side and of course all of lower Manhattan Island. Just from the blast alone, an estimated 1.7 million people would be instantly killed, with 3.1 million more injured. This does not count the effects of radiation fallout: 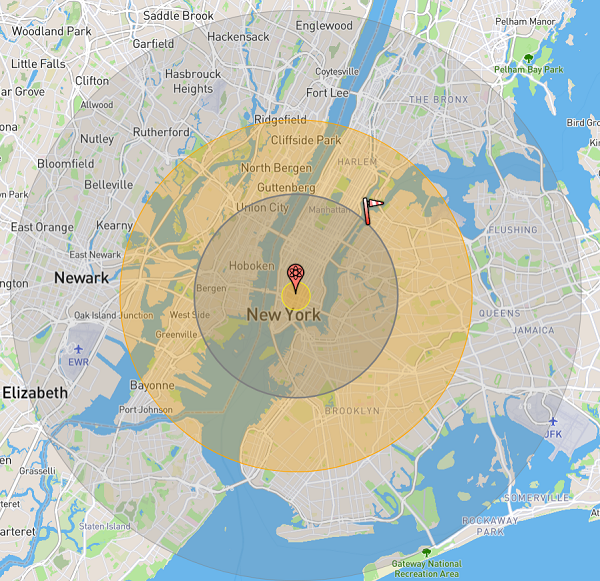 It begs the question: What buildings does the NYC government think are going to still be standing after a direct hit with a nuclear warhead?

How are people supposed to take showers when there’s no functioning municipal water system?

How are people supposed to listen to media when there’s no internet and the local media offices have been turned to rubble?

Even more shockingly, the NYC video doesn’t even mention iodine as a protective measure against thyroid damage stemming from Iodine-131 exposure.

The whole thing comes across as a suicide checklist rather than a legitimate collection of survival tips. Watch it here, and try not to imagine it’s a parody:

If you increase the nuclear yield to 100 megatons — well within the capability of Russia’s largest nuclear ICBMs — you get a fireball that extends nearly to Trenton, NJ while engulfing Stamford as well as about half of Long Island. Casualties would number over 8 million instantly, with another 6.7 million injured. The radius of this fireball is 6.1km: 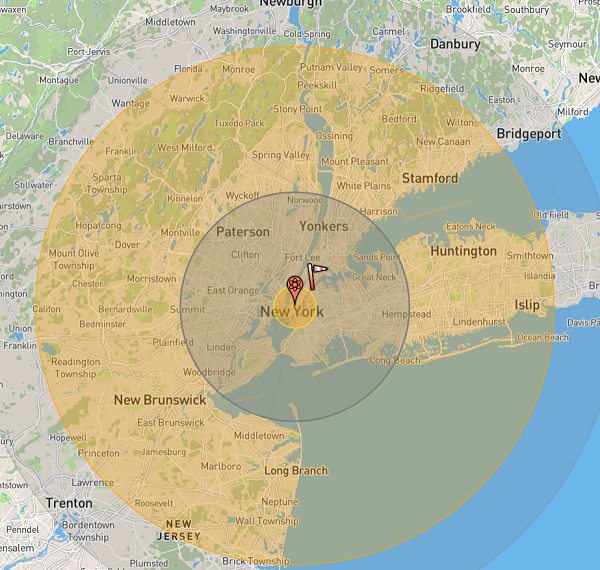 Good luck trying to find running water in this scenario. Good luck surviving at all if you’re anywhere near ground zero.

Russia issues warning to the West about “nuclear escalation”

According to an announcement published by Russian news agency TASS, the USA is pushing Russia into a cycle of nuclear escalation that could end in catastrophe. As Russian Foreign Ministry Spokeswoman Maria Zakharova stated:

After provoking an escalation of the Ukrainian crisis and unleashing a violent hybrid confrontation with Russia, Washington and its allies are dangerously teetering on the brink of an open military confrontation with our country, which means a direct armed conflict between nuclear powers. Clearly, such a confrontation would be fraught with nuclear escalation.

Note the key points of this statement:

Remember that Russia has vastly superior nuclear strike capabilities and anti-air defenses compared to the United States and European nations. On top of that, Russia’s military doctrine describes a “first strike” advantage, which means Putin knows that if this war is irreversibly headed into global conflict, his strategic advantage is best exploited if he strikes first. 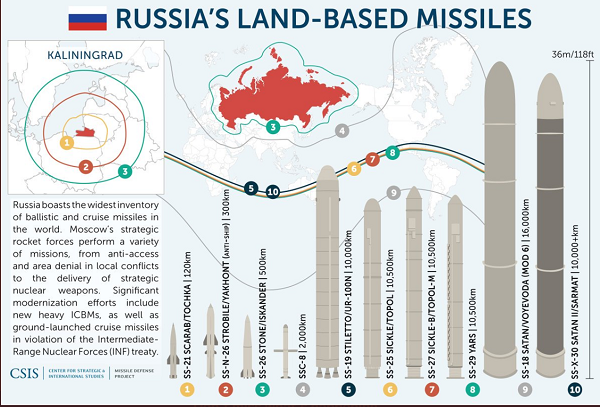 Russia’s military doctrine also requires striking with overwhelming nuclear superiority from the very first moment, meaning such a scenario would likely not be limited to small, tactical nuclear strikes on the battlefield. Most likely, a first strike would target 10+ key U.S. cities and military bases, reducing those areas to radioactive rubble. You can be certain that Washington D.C., Houston, Denver, Los Angeles, New York City, Seattle, Miami and Chicago are also on that list.

Russia’s missiles can easily reach all targets in the Northern hemisphere. The Sarmat-II missile system has hyperglide vehicle re-entry units that can easily evade all known anti-air defenses possessed by the United States. There is no defense against Russia’s missiles.

Corrupt, insane, US officials are practicing escalation, not deterrence

As I point out in my podcast below, this seems to be the goal of Barack Obama and Biden’s other handlers, who have long sought to destroy the United States by any means necessary. Because of this treasonous, destructive agenda, US officials are not practicing deterrence but rather determined escalation into nuclear conflict.

In my analysis, there’s little question that Biden’s handlers want the United States to be destroyed in a multi-city nuclear attack. All the key decisions involving Russia and Ukraine are driving toward this single goal. Note that democrat-controlled areas like NYC are even giving their residents a “suicide checklist” to make sure the maximum number of people die in a nuclear strike.

We are watching a death cult actively drive America into an empire-ending event that would see the total destruction of the United States of America. In fact, as I pointed out in my podcast below, I believe the treasonous leaders at the Pentagon would order a nuclear stand down even as Russia’s missiles were arriving on target. Why? Because the Pentagon and US State Dept. are now run by homosexual, transgender, child-grooming pedophiles who are doing the bidding of Satan. They want maximum destruction of America and they won’t authorize a retaliatory strike against anyone.

Besides, deterrence requires both nuclear powers to be run by rational people who seek the preservation of their own populations. Yet the leaders of the US are actively engineering the mass death of hundreds of millions of Americans via deadly vaccines, food shortages, energy infrastructure sabotage and climate engineering. They want us all to die, which means there is no incentive among America’s leaders to deter nuclear war in the first place.

If you live anywhere near a major U.S. city, understand that you are in the target zone, and you are living under an illegal enemy occupying regime that wants you dead. They are using Russia as a proxy to nuke America and murder hundreds of millions of people, and they are using Ukraine as a proxy to provoke Russia into launching nuclear missiles against America’s cities.

By launching nuclear missiles against America, in other words, Putin would be carrying out the bidding of Obama and Biden’s handlers. This is why every American needs to get out of the cities while there’s still a chance. If you are anywhere near ground zero (even within 10 km), you are very unlikely to survive.

How to survive a nuclear war

Those who wish to survive this scenario that seems increasingly likely must take assertive steps right now to prepare for the total collapse of society as we know it. Remember:

In my podcast below, I also recommend downloading the free ebook at NuclearWarSurvivalSkills.com (they also have a paid Kindle version and an updated, 2022 edition that’s available for a fee).

In addition, be sure to download my free audio book Resilient Prepping at www.ResilientPrepping.com.

Finally, you will need a bugout plan if you need to get out of the radiation fallout zone. This will almost certainly require self-defense tools such as firearms. Here’s my recent video review of folding AR style pistols:

You can see more of my preparedness videos at PrepWithMike.com.

The folding AR pistol I recommend is offered by ShieldArms.com.