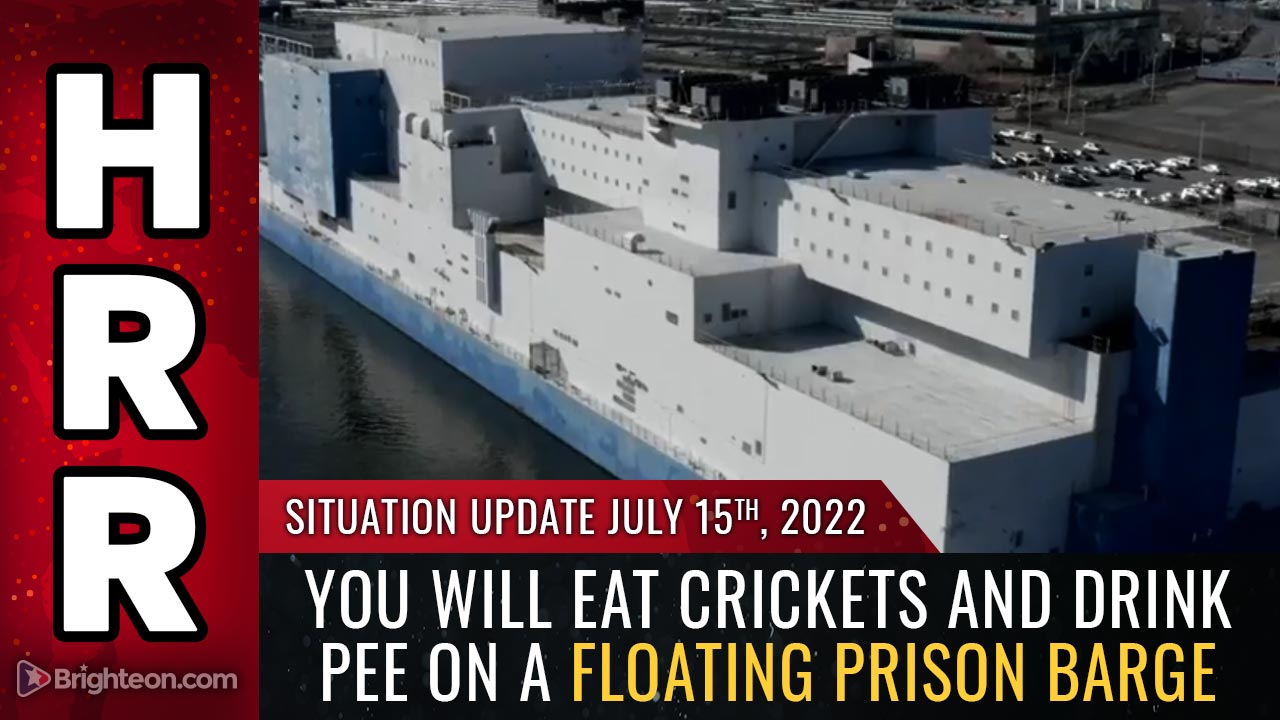 (Natural News) A massive prison barge is currently floating in the East River of South Bronx, near NYC. The barge holds 800 prisoners who are being subjected to chemical assaults, vaccine medical experiments, “enhanced restraints” and other forms of illegal torture and incarceration.

The floating barge was likely built as a way for authorities to evade oversight and local laws by claiming to be in “waterways” rather than on land. This barge, shown in this YouTube video, is the perfect representation of the future of humanity under globalist police state control.

These barges are also known as “FEMA prison barges” and are believed to be used at GITMO. They are in many ways equivalent to CIA “black sites” where prisoners are routinely subjected to torture and enhanced interrogation techniques, despite the illegality of such acts.

You will eat crickets and drink pee

Meanwhile, the corrupt governments of the world are meticulously destroying domestic food supplies while cranking up cricket factories to mass produce billions of pounds of ground cricket meal to be used as “health food” for humans and pets. As reported by WestphalianTimes.com, the Canadian government is excited about a project to, “grow billions of crickets… producing a nutrient-rich protein for premium health food and pet markets.”

Got that? Cricket protein meal is “premium health food.” Soon, you will see it touted as a replacement for whey protein and beef.

(Hope you enjoy your Cricket McNuggets.)

They also claim that producing crickets instead of beef will result in, “emitting significantly less greenhouse gas emissions during the production stage.” (Pardon their horrible grammar, the government goons running this aren’t very intelligent.)

Thus, you will be told to eat crickets in order to save the planet from carbon dioxide.

As the water runs out in Lake Mead and most of the Western United States, wastewater recycling will leap into a whole new phase where people are forced to drink recycled urine if they hope to have drinking water. The water that’s removed from biosludge processing — teeming with viruses, birth control chemicals, pesticides and medications — will be filtered and repackaged as “drinking water” for the masses.

Anyone who defies the globalist agenda to exterminate humanity will be arrested, rounded up and either exterminated in a soylent green plant or incarcerated by the corrupt regime. Thus, you will eat crickets and drink pee while living on a floating prison barge.

You will own nothing and “be happy.” Or else…

Buy an electric car to save the planet, but don’t charge it or you’ll crash the power grid

Meanwhile, Tesla owners in Texas are receiving in-car alerts that tell them to avoid charging their cars because the Texas power grid is on the verge of failure due to a lack of energy from wind turbines that aren’t turning because the wind isn’t blowing.

As ERCOT has publicly announced, wind power in Texas is currently producing just 8% of its total capacity. Solar is producing 81%, but of course only during the day when the sun is shining.

Green energy, in other words, is failing yet again.

So now we have a situation where we’re all supposed to buy “green” cars to save the planet, but the green cars can’t be charged when the “green” energy isn’t working because the wind isn’t blowing. So your “green” car is useless because green energy isn’t reliable. But globalists tell everyone to move to more green energy and more green vehicles, which will only make the entire system more prone to collapse. Is this some sort of insane climate joke?

Truthfully, there isn’t enough capacity in the power grid right now to reliably charge the electric cars already in existence. What happens when millions more people buy electric vehicles and plug them in? That answer is obvious: The power grid ceases to function and you end up with rolling blackouts.

In other words, the “green” agenda will push America into a third world existence.

It’s one more important reason to get a solar generator for backup power, by the way. The brand I currently recommend is EcoFlow, and they are available at SAT123.com, one of our sponsor’s websites (scroll down to see the EcoFlow solar generators and power storage devices).

The real solution to all this is to use fossil fuels and drag ourselves out of starvation and global financial collapse. But the anti-human luciferians in charge of the world right now want to exterminate billions of human beings, so they are pursuing the policies that are designed to cause maximum human casualties.

I cover all this and much more in today’s Situation Update podcast, which also starts off with me singing a happy song called, “I love a black man with a gun.”