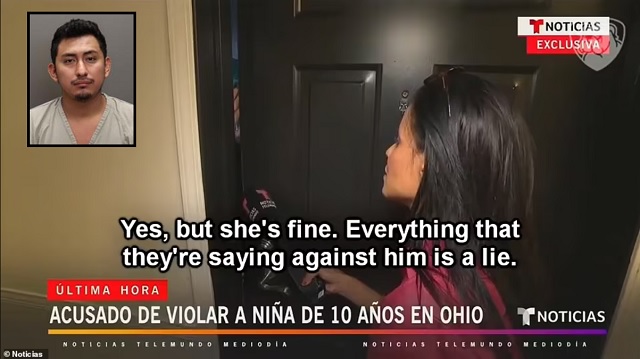 This was all just one big cultural misunderstanding!

From The Daily Mail, “Mom of Ohio girl, 10, who was forced to get abortion in Indiana after ‘being raped by illegal migrant’ says daughter is ‘fine’ and defends the SUSPECT: ‘Everything they say about him is a lie'”:

The mother of a 10-year-old Ohio girl who was raped and impregnated by an illegal immigrant has denied the charges, despite the suspect admitting to the crime.

The woman, who declined to identify herself, claims her daughter is ‘fine’ after being forced to travel to Indiana to get an abortion.

The procedure was barred in their home state due to the so-called heartbeat bill, which bans abortions after a fetal heartbeat is detected.

Gerson Fuentes, 27, of Guatemala, confessed to raping the young girl – however, her mother alleged to a television reporter that ‘everything they’re saying against him is a lie.’

[…] Telemundo reporter María Vargas-Pion visited the Columbus residence where the 10-year-old rape victim and her mother allegedly live on Wednesday.

A woman claiming to be the girl’s mother hid behind her front door as she defended Fuentes.

‘Did the girl live here as well?’ Vargas-Pion asked.

The woman, speaking in Spanish, replied: ‘Yes, but she’s fine. Everything that they’re saying against him is a lie.’

‘And the child – are you related to her or her mother?’ the reporter probed.

‘She’s my daughter,’ the mother answered.

The woman reportedly said she has not filed charges against Fuentes, even though he was charged with rape after confessing to having ‘vaginal contact’ with the girl on at least two occasions.

No wonder they didn’t want to report this to police. The media wants everyone to think the real story here is her having to travel for an abortion and not the fact that this is our country now thanks to open borders.