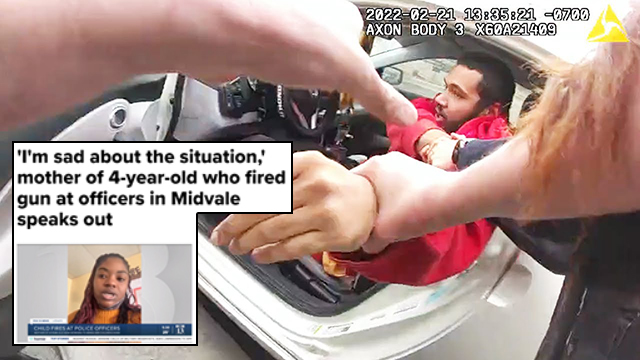 This appears to be the youngest child ever to fire a gun at police officers.

Utah police have released body-camera footage showing a Feb. 12 incident in which a 4-year-old shot at police officers at a McDonald’s drive-thru in Midvale.

Officers with the Unified Police Department were responding to reports that a male suspect allegedly brandished a firearm at McDonald’s employees due to an incorrect order around 1:30 p.m. local time, and, once officers arrived and began to detain 27-year-old Sadaat Johnson, a child in the backseat of his vehicle fired a gun at the responders.

In the body-camera footage from the Unified Police Department released to FOX 13 Salt Lake City, officers can be heard telling two distraught children, ages 3 and 4, in the backseat of Johnson’s vehicle, “It’s okay,” after one of the children fired a single shot.

The child’s mother said earlier this year that she was “sad about the situation.”

In disturbing video obtained by @AlphaNewsMN, very young children in a hood in St. Paul, Minn. were recorded hitting police & cursing expletives at them. pic.twitter.com/pkbbySKTlD