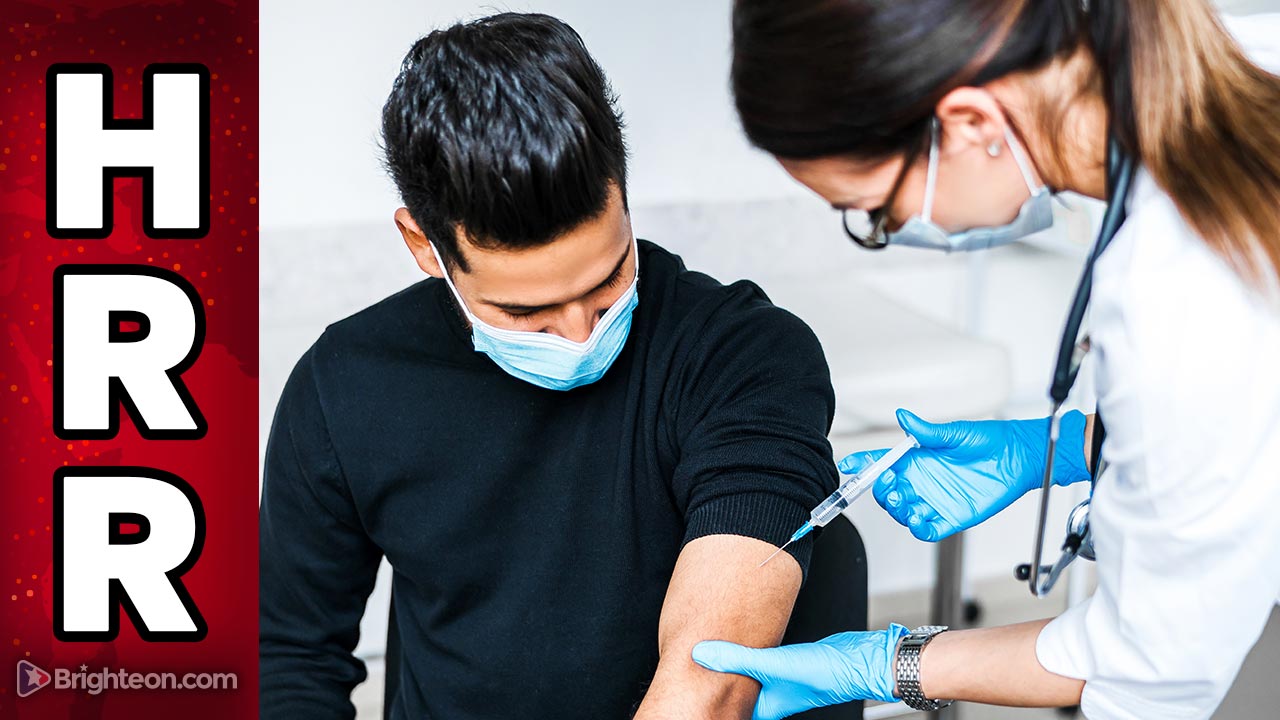 (Natural News) As even Tedros of the W.H.O. now openly discusses, monkeypox primarily strikes gay men who have multiple sex partners. However, there’s an aspect of this monkeypox outbreak that isn’t yet recognize by most: The fact that 96% of LGBT individuals have received covid vaccines. This means that nearly all gay men currently suffering from monkeypox are also “vaccinated” — or, technically, injected with experimental gene altering mRNA concoctions.

Those vaccines, in turn, are well documented to suppress immune function. Over a period of several months — especially when reinforced with additional “boosters” — a person’s immune system deteriorates to such an extent that they can no longer protect themselves from the variety of chemical, biological and environmental insults that threaten the body. This is what is leading many people to suffer, for example, explosive cases of eczema that were previously under control before the vaccine.

This woman experienced a shocking explosion of eczema after taking three vaccine shots, and she now realizes it was all caused by the vaccine itself:

Evidence points to the same phenomenon taking place with monkeypox and gay men who engage in gay sex activities with multiple partners. Monkeypox is now documented to be carried through saliva, urine and semen, according to published research from the Barcelona Institute for Global Health (ISGlobal). See the full write-up on StudyFinds.org which states:

A new monkeypox report is raising the level of concern that the virus could infect others through a patient’s bodily fluids. Researchers in Spain have discovered high viral loads in the saliva, semen, urine, and other samples coming from confirmed monkeypox patients.

Study authors say the initial cases in Britain, Portugal, and Spain have been mainly discovered among men who have sex with other men. In the United States, there have been over 1,400 confirmed cases so far.

However, it is important to note that gay sex orgies probably haven’t suddenly changed in the kind of behaviors pursued by participants. In other words, gay men didn’t just all of a sudden begin engaging activities that would cause saliva, urine and semen to be shared among their participants. This sort of activity has been going on for a very long time. What has changed is that now they are covid vaccinated, which means their immune systems are being destroyed. And because of that, their immune systems can’t fight off the exposures they have long been subjecting themselves to (such as rectal bacteria, fecal matter, blood from micro skin tears, etc.).

Notably, lesbian couples do not share this monkeypox risk even if they share multiple lesbian sex partners. Why? Because they are not engaging in the same physical behaviors as gay individuals who share multiple sex partners. This explains why monkeypox is being diagnosed almost exclusively among gay men, not gay women. Because, as you know, men and women have different sex organs, even if the corporate media currently pretends they don’t.

Of course, the CDC would never engage in such a command. It’s okay to order the entire population into lockdowns, masks and vaccines, but it’s never acceptable in “progressive” society to specifically tell gays to stop the behavior that’s spreading monkeypox. As Dr. Alexander explains, “How could you close businesses down for 2 years due to the COVID fraud, cause business owners, laid off employees, children to kill themselves over the lockdown lunacy, yet you cannot tell the GAY community to stop the contact for 3 weeks?”

He even points out it’s not about being gay, it’s about physical cause and effect:

But for God’s sake, it is time to give the right guidance and end the bullsh#tting around with political correctness.

Even if you’re not a gay man, covid vaccines may turn your body into a hyperactive response system triggered by environmental toxins

So here’s where all this gets interesting. Far beyond monkeypox and LGBT communities, even heterosexual, monogamous individuals may find themselves overcome with postules, allergic reactions, muscle pains, neurological inflammation and other serious problems simply by being exposed to routine environmental toxins, all due to vaccine hypersensitization / collapse of the immune system.

This means vaccinated individuals may be unable to swim in public swimming pools, for example, or they may discover new allergies or food sensitivities that they never experienced previously. They may even become allergic to medications such as antibiotics, and if they live in areas with high pollen counts, they may suddenly discover that living there is unbearable due to their allergic reactions.

Then there’s the issue of aflatoxins in food, which are a class of extremely toxic chemicals produced by fungi. These fungi strains routinely infect cashews and other nuts as well as seeds and grains like wheat and corn. Aflatoxins are deadly to cattle, chickens and other ranch animals, and when ingested by humans, they require a well-functioning liver to detoxify. (This is why it’s a good idea to have a ready supply of NAC supplements on hand, and support your liver function with fresh dandelion leaves and roots, among other things. P.S. I am growing hydroponic dandelions for this very reason… more on that later…)

One phenomenon taking place right now is that food supplies are sitting longer in storage due to breakdowns in logistics and transportation, stemming from fuel scarcity, fuel prices, labor shortages, railway strikes and so on. This gives food supplies a higher opportunity to grow aflatoxin-producing fungi, and it means the food becomes increasingly toxic as it’s waiting to be delivered. Any hot, humid environment will encourage the growth of aflatoxins. (Note: The Health Ranger Store already tests all nuts and seeds for aflatoxins, and we are developing an aflatoxin test using mass spec instruments — LCMS — to apply to other food items in the near future.)

Thus, the food supply is becoming more toxic because deliveries are delayed. Even worse, when people are vaccinated with the experimental covid shots, they may weaken their body’s ability to neutralize these powerful toxins. In fact, many of the post-vaccine symptoms we are seeing in people right now seem to strongly resemble aflatoxin poisoning symptoms.

From MoldPedia.com, aflatoxin symptoms include:

Note how closely these symptoms resemble post-vaccine symptoms. It could very well be that many of these experiences are not directly caused by the vaccine alone, but rather that the vaccine makes people’s systems highly vulnerable to aflatoxin poisoning, given that aflatoxins are routinely present in the food supply in microscopic quantities. (Peanut butter, for example, may contain aflatoxins due to the frequent use of sub-standard peanuts which sometimes harbor mold and fungi.)

The American Food and Agriculture Organization estimates that 25% of the food crops in the world are affected by mycotoxins. Of these mycotoxins, aflatoxins are the biggest problem.

Corn, cottonseed and peanuts are the crops most at risk of being contaminated by aflatoxins. Aspergillus also commonly grows on beans, rice, tree nuts and wheat. It grows less often on other grains and nuts.

If animals are given feed contaminated with aflatoxins then aflatoxin mycotoxins can end up in milk, eggs and meat. Aflatoxin M1 and M, which are often found in cow’s milk, are metabolites produced by animals which have eaten aflatoxins.

Beware of covid vaccines making you vulnerable to other exposures

In summary, beware of the effects of taking covid vaccines, since they can make your body more vulnerable to other insults, chemicals, toxins, pathogens, etc. In effect, covid vaccines will multiply the toxic effects of other toxins, and eating habits (or sexual habits) which previously presented no real risk to your health may suddenly emerge as extremely serious, alongside very apparent symptoms such as skin rashes, postules, difficulty breathing, and so on.

Learn more about all this in today’s Situation Update podcast via Brighteon.com: