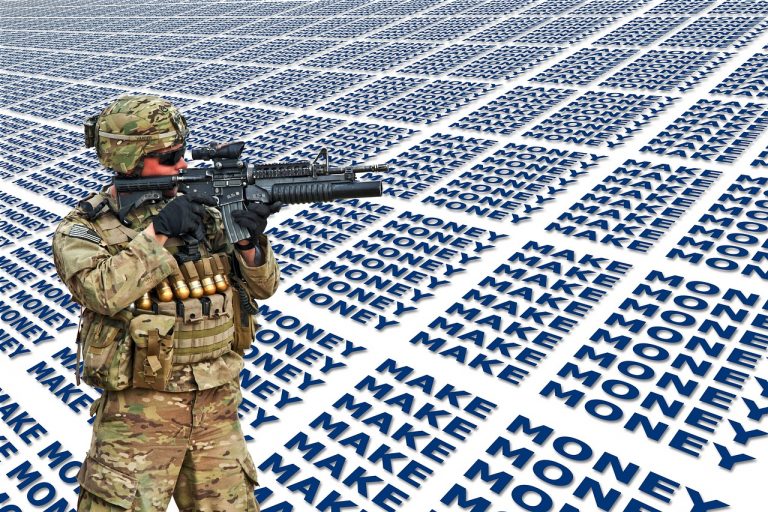 George Orwell once said that “war against a foreign country only happens when the moneyed classes think they are going to profit from it”, and he was right on target.  War is enormously profitable, but once the conflicts in Iraq and Afghanistan ended the military industrial complex needed a new cash cow.  So now we have the war in Ukraine, and we are being told that it could go on for years.  Life is good again for the big arms manufacturers, but it could be even better.  A war with China would cause military spending to soar to unprecedented heights that we have never been before, and we are getting closer to such a conflict with each passing day.

But before I get to that, let me start by taking a look at the impact that the war in Ukraine is having.  The Biden administration is asking for a whopping 802 billion dollars in defense spending for the upcoming fiscal year, but it looks like Congress is going to give him about 850 billion dollars instead…

While lawmakers haven’t struck a deal yet on spending for the coming fiscal year, increases backed by the armed services committees point to national defense spending that could approach or exceed $850 billion, versus the $802 billion Biden requested.

Rep. Anthony Brown (D-Md.), a House Armed Services Committee member who voted in favor of the topline increase, noted the swiftness of the deliberation over the topline. “In the committee, there was almost no debate,” he said.

With the war in Ukraine being so trendy, there is very little appetite on either side of the aisle for a battle over such reckless spending.

So more money than ever is going to be flowing to the military industrial complex, and those that are raking in the cash couldn’t be happier.

For example, every single Javelin missile that is used in Ukraine costs approximately $78,000…

Unfortunately for the Ukrainians, it turns out that the Javelins don’t work very well against Russian tanks.

But we are going to keep sending them even more Javelins because they are hugely profitable.

Stinger anti-aircraft missiles are more effective, and Raytheon has been given a fresh 625 million dollar contract for more of them…

Another boon for Raytheon will come from the US decision to send 1,400 Stinger anti-aircraft missile launchers. The company has already been awarded a $625m (£494m) contract to replenish the stocks. Germany is giving Ukraine 500 of the systems and more are coming from Denmark, Italy, Latvia, Lithuania and the Netherlands.

War is a racket, and it is making a lot of people a whole lot of money.

Unsurprisingly, that even includes some members of Congress…

Some members of Congress stand to personally profit off Russia’s war on Ukraine.

At least 20 federal lawmakers or their spouses hold stock in Raytheon Technologies and Lockheed Martin, which manufacture the weapons Western allies are sending Ukraine to fight Russian invaders, according to an Insider analysis of federal financial records.

So when these members of Congress vote for more military spending, it is making them even wealthier.

There is something very wrong with that picture.

And it looks like everyone involved with be laughing all the way to the bank for a long time to come.  In April, a group of leaders from the top arms manufacturers in the country was told by the Pentagon that the war in Ukraine could last for “years”…

The Pentagon will host leaders from the top eight U.S. weapons manufacturers on Wednesday to discuss the industry’s capacity to meet Ukraine’s weapons needs if the war with Russia lasts years, two people familiar with the meeting said on Tuesday.

Demand for weapons has shot up after Russia’s invasion on Feb. 24 spurred U.S. and allied weapons transfers to Ukraine. Resupplying as well as planning for a longer war is expected to be discussed at the meeting, the sources told Reuters on condition of anonymity.

You would think that would be enough to satisfy the military industrial complex for a while.

But why have just one war when you can have two instead?

The Biden administration has been relentlessly provoking China for months, and this week persistent rumors that Nancy Pelosi will soon visit Taiwan have prompted furious remarks from Chinese officials.  Here is one example…

“If the US side insists on making the visit, the Chinese side will take firm and strong measures to safeguard our sovereignty and territorial integrity,” Chinese Ministry of Foreign Affairs spokesperson Zhao Lijian said.

Those are very strong words.

On Twitter, one of China’s most famous journalists was even more blunt…

“If the U.S. can’t restrain her, let China restrain her & punish her,” he wrote on Twitter. “[The Chinese] Air Force will surely make her visit a disgrace to herself and to the U.S.”

Most Americans don’t realize that this could be a real turning point.

The Pentagon is pledging to do whatever is necessary to protect Pelosi on her trip, and the Chinese are reportedly threatening to impose a no-fly zone over Taiwan in response…

“If there’s a decision made that Speaker Pelosi or anyone else is going to travel and they asked for military support, we will do what is necessary to ensure a safe conduct of their visit,” Chairman of the Joint Chiefs of Staff Gen. Mark Milley told the AP. “And I’ll just leave it at that.”

Officials declined to provide specifics but said measures could include fighter jets, ships and surveillance equipment to create redundant shields around Pelosi. China threatened to impose a no-fly zone over Taiwan if Pelosi visits and has dispatched warplanes into Taiwan’s claimed air defense identification zone, CNN reported, as a possible countermeasure.

I really hope that China does not do this.

Imposing a no-fly zone over Taiwan would be an act of war, and the Biden administration would inevitably escalate matters in response.

Meanwhile, the Chinese military continues to deepen ties with the Russian military…

The Chinese military is sending a delegation of troops and military vehicles to participate in a series of military competitions in Russia next month.

On Tuesday, the Chinese People’s Liberation Army (PLA) announced its delegation of troops participating in the 2022 International Army Games (IAG) in Russia had departed by train from the Chinese Inner Mongolian city of Manzhouli, on its way to the city of Zabaikalsk in Russia’s southeast. The Chinese delegation left for China along with vehicles for the “Masters of Armored Vehicles” and “Tank Biathlon” competitions.

Could we eventually see a global war with the United States on one side and Russia and China on the other?

There is something about all of this that sounds awfully familiar.

If they are not extremely careful, our leaders could soon cross lines that will never be able to be uncrossed.

I have always said that all politicians should be forced to fight in the wars that they start, because if that was the case there would be a whole lot less wars.

Just look at Ukrainian President Volodymyr Zelenskyy. While other Ukrainian men are literally being dragged out of their homes and sent to the eastern front to die, Zelensky is doing photo shoots for magazines such as Vogue.

Zelensky does a photoshoot for Vogue in the middle of a war.pic.twitter.com/8RViZ6ytAS

I would love to see Putin, Zelenskyy, Biden and all of the other politicians involved in starting this war be forced to serve on the front lines in eastern Ukraine.

It is often said that war is hell, and what is going on in eastern Ukraine right now is a tremendous tragedy.

Unfortunately, more war is on the horizon, and all of us will pay a very great price for the recklessness of a few.