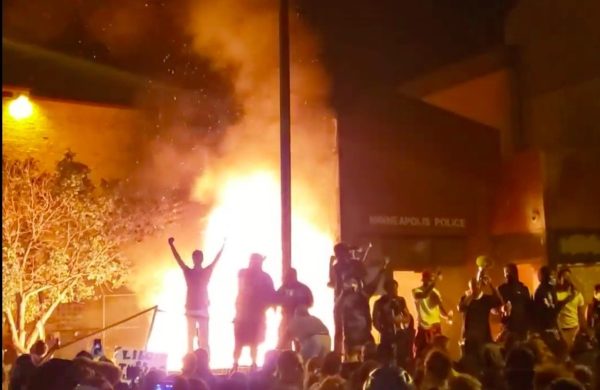 Ever since the 3rd Precinct in Minneapolis was allowed to be burned down Black Lives Matter terrorists on May 28, 2020, our entire society has been dismantled in the name of fighting systemic inequality, implicit bias, and white privilege.

Dead White Males, long revered by their posterity in America, have seen their statues desecrated, pulled down, or destroyed.

And yet the lawlessness ushered in by the capitulation by the state, who surrendered their monopoly on violence to BLM terrorists, is still somehow the fault of white people, despite the black bodies being impacted almost unanimously being targeted by other black individuals.

Remember, in 2022 America, every difficulty non-whites face is obviously due to white privilege and the legacy of slavery in America. Oppression, persecution and the fear of annihilation is a fear all black people have historically faced in the USA in not just the past and present, but the future.

The surge in gun crimes in Minneapolis is claiming Black victims at a vastly disproportionate rate to the city’s demographics.

Last year, police counted one Black shooting victim for every 150 Black residents in Minneapolis, compared to one white victim for every 3,768 white residents, according to data presented to the City Council this week.

White people comprise about 60% of Minneapolis’ population, versus 19% Black or African people, according to census data. Yet only 9% of shooting victims are white so far in 2022, compared to 83% Black, the data from Minneapolis police show. Two-thirds of the victims are also under the age of 31, and a majority of shootings occurred in specific “hotspot” areas in north and south Minneapolis.

The data highlight the compartmentalization of how and where violent crime is surging, and in turn how residents are living starkly different daily realities based on demographics, said City Council Member Latrisha Vetaw, chair of the committee on public safety, who is Black and resides in the Jordan/Willard-Hay area of the North Side.

Vetaw noted that the police data also found that 89% of shooters were Black in cases where race was known in 2022. “That makes sense that the violence is that bad, because these are underserved communities,” said Vetaw. “There’s work for us to do as a community.”

Violent crime has been on the rise in Minneapolis since 2020. The data presented to the council shows some early signs that the crime wave has crested. Vetaw attributed progress to police using data to determine where to target resources, but she cautioned against drawing conclusions yet.

“I feel like I would be jinxing it if I said [crime has] plateaued,” she said.

The number of gunshot victims, shooting-related calls and rounds detected are all down from this time last year — though all still way up from 2019 — according to the data. Carjackings are on the rise over last year, and the number of illegal guns recovered is static.

The city has seen 59 homicides this year, incrementally down from 62 at this time in 2021, according to data tracked by the Star Tribune, which also includes people killed by police.

The data also reflects an alarming spike in gunfire from automatic weapons beginning in August 2020, driving an increase in the number of total shots being fired, Minneapolis crime analyst Austin Rice said in the council committee meeting.

This year, the city detected 12,849 bullets fired through its Shotspotter technology — microphones that capture the sound of shots fired and are present only in high-crime areas — according to the data. That’s down from last year’s 16,021, but still way up — 230% — from 2019’s 3,888.

Rice said the rapid upward trend comes from the prevalence of “auto-sears,” also known as “switches,” an increasingly popular gun modification that turns a handgun into an automatic weapon. He said crime analysts first started noticing the automatic gunfire on Aug. 13th, 2020, and they’ve since tallied 390 activations of automatic gun fire, totaling 4,138 rounds.

A handgun with a switch can empty a clip in seconds and make aiming nearly impossible, and police say the spray of bullets coming from these modified weapons is leading to more shootings of unintended targets, such as two women shot in the face in downtown Minneapolis last fall.

The crime spike isn’t just hitting Minneapolis. Over the past two years, homicides and gun assaults trended upward across America, according to a Council on Criminal Justice analysis of 23 cities, including Minneapolis, with readily available crime data released this summer.

Is this article arguing not if enough white people are getting shot in Minneapolis, and that this discrepancy is somehow an example of the racism of bullets?