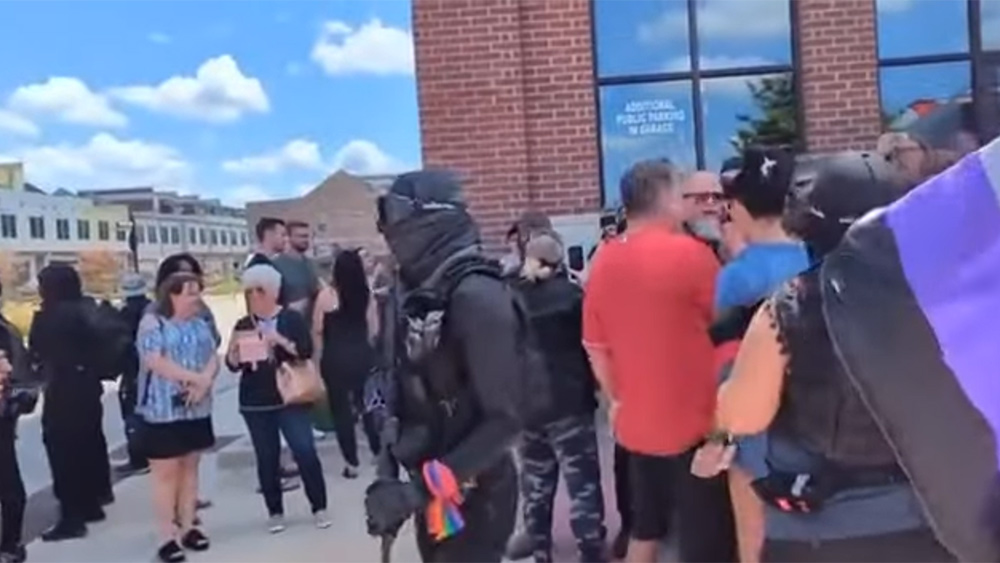 (Natural News) On Sunday, LGBT-supporting Antifa terrorists swarmed the Anderson Distillery and Grill in Roanoke, Tex., (a suburb of Dallas and Fort Worth) to “protect” attendees of a “Barrel Babes Drag Brunch” event that was marketed to children.

Four drag queens performed at the “kid friendly” event, which exposed underage children to “vulgarity, sexualization of minors, and partial nudity,” according to journalist Taylor Hansen.

Armed with AR-15s, masked Antifa goons patrolled the streets and even perched themselves on the third floor of a nearby parking garage like snipers to intimidate Protect Texas Kids, a group founded by Kelly Neidert that aims to protect children against drag queen grooming and other LGBT perversion. (Related: Remember when Nancy Pelosi declared that drag queens are “what America is all about?”)

Neidert organized a “pop-up protest” in anticipation of the event, to which Antifa responded by sending gun-toting terrorists from its John Brown Gun Club, headed up by Christopher Guillott and Garrett Lee, to create a scene.

“Kelly Neidert is a self-described ‘Christian fascist’ and one of the most dangerous fascist organizers in DFW,” wrote the John Brown Gun Club on its pedophilia-supporting Twitter page. “She has worked with Andy Ngo, Alex Stein, and a host of other wannabe fashy ‘influencers.’”

Vulgar, loud-mouthed mother at drag queen event flipped off protesters and flashed boob – all in front of her son

Convinced that Neidert and her allies who are trying to protect children from pedophilia and LGBT grooming are the bad guys, the John Brown Gun Club showed up to threaten them with guns.

These goons reportedly acted as “bodyguards” while parents dragged their children inside the Anderson Distillery and Grill, which handed out drinking wristbands to underage children while overpacking the place in violation of the local fire code.

Police were called to deal with the rampant pedophilia and underage drinking that was being encouraged at the distillery, but not a single officer did anything about the situation. In fact, one officer was seen going after the protesters rather than the Antifa terrorists – watch below (WARNING: Language):

Wait: are these not the same Antifa terrorists who were staging protests against guns in the past? Now, all of a sudden, they are in support of guns because it suits their cause?

At one point during the melee, an angry, loudmouthed mother was seen screaming outside the distillery while attempting to molest her son in plain sight. When called out from across the street, the woman whispered into the boy’s ear and apparently told him to flash his middle finger at the group: classy.

Later on, the woman was seen leaving the event in a minivan with her son – watch below – upon which she began blasting vulgarities out the window before flashing one of her boobs at the crowd – all in plain view of her son.

A woman attending “family friendly” drag brunch in Roanoke, TX argues with protesters and exposes her breasts with her child in the car.

If this is “kid friendly,” we would hate to see the “adult” version of one of these drag events.

This is the filth we are up against, America. These are the people who want to brainwash your innocent children into cutting off their body parts so they can become their “true selves.”

The following clip shows a recap of what happened at this filthy, disgusting event at the Anderson Distillery and Grill in Roanoke, Tex. At the end of the clip, a middle school teacher who was in attendance explains how she and others like her are fighting to normalize this type of behavior and thinking at Texas public schools:

Another Child Drag Show was hosted in Texas, this time in @CityofRoanokeTX—

Over 20 children were in attendance and multiple teachers.

Here’s a recap of the event:

More of the latest news about the downfall of America at the hands of LGBT groomers and pedophiles can be found at Transhumanism.news.