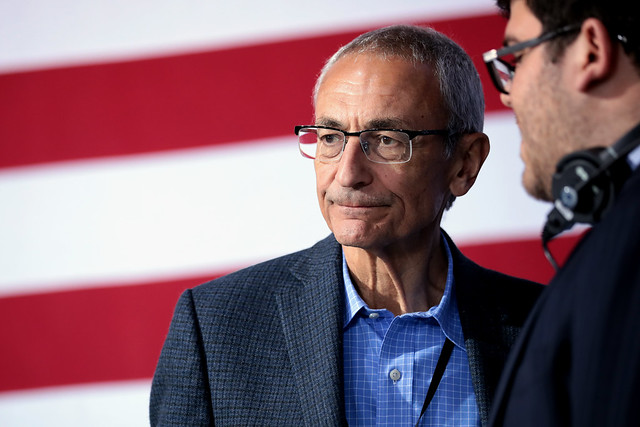 The White House announced Friday that they are hiring Clintonista political hack John Podesta to oversee a whopping $370 billion in federal spending on “green energy.”

Biden might as well have hired Hunter for the job.

President Biden will appoint John Podesta, a veteran Washington insider who spearheaded the Obama administration’s climate strategy, to oversee the federal investment of $370 billion in clean energy under a landmark new climate law.

As a senior adviser to Mr. Biden on clean energy innovation, Mr. Podesta will shape how the government disperses billions of dollars in tax credits and incentives to industries that are developing wind and solar energy, as well as to consumers who want to install solar panels, heat and cool their homes with electric heat pumps or buy electric vehicles.

In addition to his time in the Obama administration, Mr. Podesta, 73, served as chief of staff to President Bill Clinton and was chairman of Hillary Clinton’s unsuccessful campaign for president in 2016. He founded the Center for American Progress, a left leaning think tank, and is now chairman of its board. From that perch, Mr. Podesta has informally been advising the Biden administration, pushing the White House to act more aggressively on climate change.

In bringing on Mr. Podesta, Mr. Biden continues to surround himself with veterans of past Democratic administrations, old hands who can step into challenging positions without on-the-job training.

Please remember while you’re getting killed at the pump that the Biden regime’s cronies are cashing in with hundreds of billions in “green energy” scams as they drive energy prices through the roof by supporting endless war in Ukraine and ban the importation of dirt cheap Russian oil and gas.

If you oppose this den of corruption then you’re a MAGA terrorist.