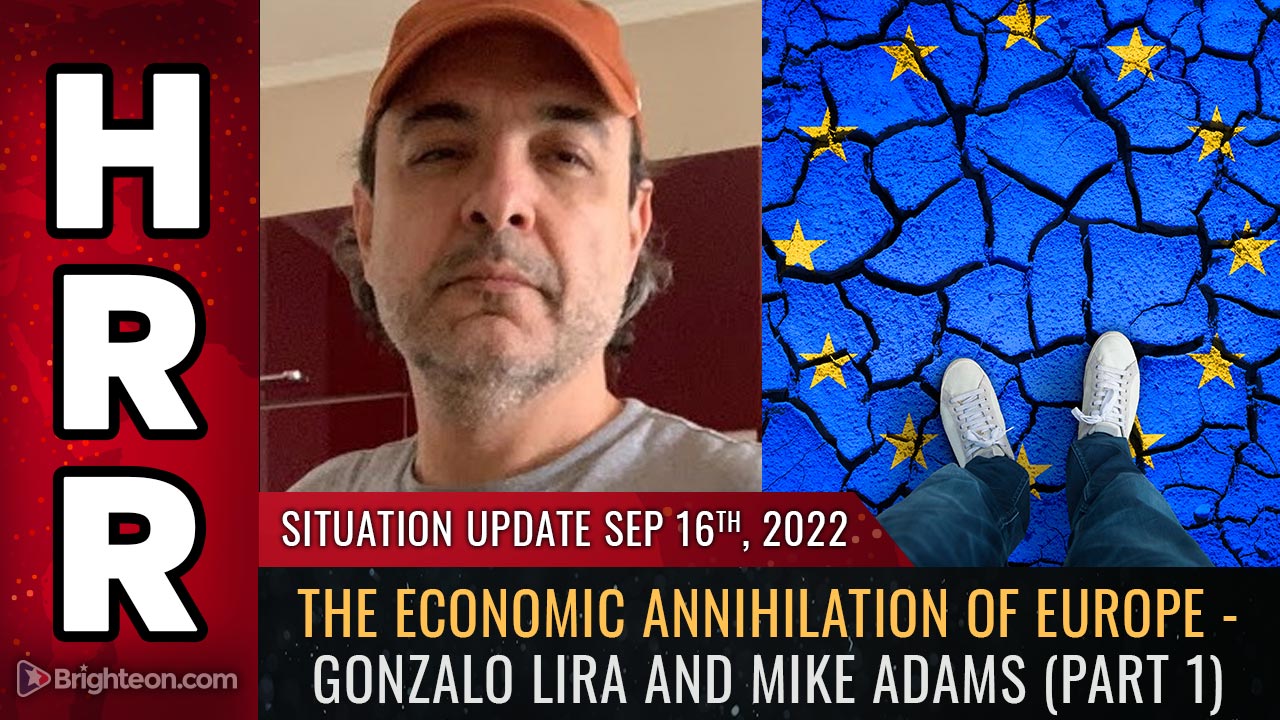 (Natural News) Gonzalo Lira, the Ukraine-based, Chilean-born American who has made waves with his uncensored videos (see his YouTube channel here) and roundtable discussions about Russia and Ukraine, joined me for an epic 2+ hour interview late last night. We discussed topics like:

– Why Ukraine’s counter offensive was a victory for Russia
– Description of the losses of Ukraine’s military men and equipment
– Why western politicians and media talking heads are incompetent and wrong
– “Suicide sanctions” and the self-inflicted annihilation of Europe
– How Western Europe will be reduced to an impoverished wasteland
– Why Putin prefers to AVOID escalation of this war
– The destruction of European industry, followed by finance
– Details on the expected wave of civil unrest across Europe, and the weaponization of government to brutally repress public protests

In summary, he described the coming winter of energy scarcity and economic collapse as causing the “economic annihilation of Europe,” adding that in the aftermath of this coming collapse, Western Europe would be transformed into an impoverished, desperate region of the world, utterly lacking the financial, economic and industrial power dominance it has enjoyed in recent history.

Whether you agree or disagree with Gonzalo Lira, his ideas are intellectually well formed and presented without any attempt whatsoever to conform to political correctness or government agendas. That’s why I invited him for an interview, after all. With all the “official” voices of ignorance, incompetence and absurdity dominating western media, White House press conferences and the allowable window of conversation on Big Tech’s platforms, it’s refreshing to hear someone say what they actually think rather than virtue signaling someone else’s twisted conclusions.

What Gonzalo and I agree on is that most of the political leaders in western nations are disconnected from reality and utterly incompetent in their actions. They not only lack any real understanding of economics and war, they fail to grasp fundamental concepts of cause and effect. They are furthermore rather arrogant, yet completely unaware that their absurd ideas simply don’t work — such as, “Hey, let’s punish Russia with economic sanctions!”

As Gonzalo lays out in this interview, what makes the whole thing worse is that Western leaders refuse to course correct when things turn against them. Instead, they double down (or triple down) on stupidity, wondering why things are collapsing all around them (like Germany’s heavy industry, which is vanishing by the day due to sky-high energy prices).

It’s one thing to merely be stupid. It’s an entirely different thing for national leaders to think they’re rulers of the world while simultaneously demonstrating repeated acts of stupidity with no self-awareness of their incessant failures.

Western Europe will not survive the incompetence of its virtue-signaling, suicidal leaders

As we published yesterday, Europe now faces a “dark winter” of collapsing industry, mass unemployment, insane energy prices, food scarcity and civil unrest. Finnish Economist Tuomas Malinen warns of an economic apocalypse that’s about to get rolled out across Western Europe, all stemming from the economic sanctions inflicted upon Russia by NATO / western nations in an attempt to destroy Russia. (Hear my full interview with Malinen at this link on Brighteon.)

The effort backfired in spectacular fashion, leaving European nations facing a winter with desperate scarcity conditions affecting food, fertilizer, energy, metals, industrial chemicals and more. As Malinen explained, European banks will face a wave of loan defaults as European’s industrial economy plunges into bankruptcy. Those loan defaults will threaten the solvency of European banks, and the inevitable defaults will spread to North American banks that have exposure to European debt. The presences of debt derivative instruments — and the rapidly failing Euro currency — only add to the risk of widespread financial defaults at three levels: 1) Private sector, 2) Financial institutions, 3) National governments.

As Gonzalo Lira points out in our interview, below, this devastating collision for Western Europe has already “happened,” and it’s just a matter of the devastating effects playing out in slow motion. None of this can be stopped. Even worse, European leaders aren’t even attempting to stop it, because they are doubling down (or tripling down) on stupid.

We are watching the “suicide cult” of Western Europe plunge the dagger into its own heart, all while being terrified about the sight of blood. The sheer stupidity, arrogance and utter incompetence of the leaders of the UK, France, Germany, Austria, Spain and other European countries is truly staggering, even to those of us who routinely observe and document government insanity around the world. (And yes, I fully recognize the stupidity of America’s occupying government regime is also epic, even comic. Joe Biden doesn’t get a pass either…)

This is not from Gonzalo, but from my own analysis, Western Europe in 2023 is going to look a lot like Sri Lanka in 2022.

Today we publish part one of the interview (this part is about an hour in duration). I have added a 7-minute introduction to provide context and to explain why my regular podcast format did not appear today.

Tomorrow we will publish the remainder of the interview — about 1 hour and 20 minute in duration — which gets into more issues of philosophy and ethics while delving into some of the background and personal history of Gonzalo Lira himself (including hints about his new book series that he promises will get him deplatformed everywhere, which is of course highly intriguing…).

You can hear the first hour of this epic interview here:

Brighteon link: Brighteon.com/63f0b0f4-1628-4b23-a29a-a3328ebb62ac
(Big Tech platforms do not allow you to share Brighteon links because Big Tech companies are run by fascists who despise free speech.)

You are free to re-post this full interview on your own channel, on any platform. Spread the word.

Note that we also cover news about Russia at RussiaReport.news