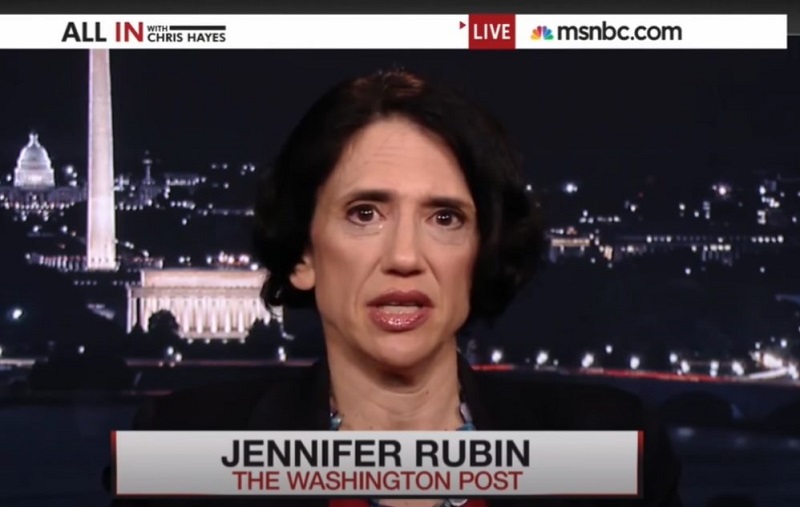 On Monday, Washington Post propagandist Jennifer Rubin claimed that pointing one’s finger in the air is somehow comparable to a Nazi salute.

“The display bore an uncanny resemblance to the infamous Nazi salute. The incitement and zombie-like response should put to rest the notion that Biden should be “reaching out” to these people. They are unreachable, and pretending otherwise misleads voters,” she wrote on Twitter.

The display bore an uncanny resemblance to the infamous Nazi salute. The incitement and zombie-like response should put to rest the notion that Biden should be “reaching out” to these people. They are unreachable, and pretending otherwise misleads voters. https://t.co/jf5pnPpn20

Of course, she was referring to a recent Trump rally, so the implication is clear — everyone who supports Trump and sees America as “#1” is a Nazi.  It’s all part of the effort to foment violence and bloodshed against anyone to the right of Josef Stalin.

We know this, because Twitter blue-check Saira Rao, a leftist author who apparently hates white women and the US flag, said so, Twitchy told us:

This is a Trump rally from last night. At a glance, it could be Nazi Germany.

Ah, so ALL Republicans are Nazis.  Got it.

Since pointing a finger is now a Nazi salute, we asked:

Since pointing makes someone a Nazi, what about this? pic.twitter.com/r32YBXaGz7

Twitchy asked: “Anyone remember the last time Jennifer was right about anything? Anything at all?”

We certainly can’t.  All she does is spew hate and incite violence.  Others also had thoughts:

When a teacher asks her students a question, and students raise their hands–according to your stupidity, that resembles a Nazi salute.

Wait…holding up their fingers to signify they believe America is no. 1, resembles a " Nazi salute"?? I mean, have you been to a college or pro sports stadium, or arena? Where EVERYONE is doing the same thing? To signify they feel their team is no.1? Looks the same, to me…idk.

This one is going to be problematic, Jen… pic.twitter.com/yxHhkKitCX

You are a complete idiot.

Liberals like Rubin simply won’t be happy until a second bloody civil war breaks out in America, and they’re doing all they can to make it happen.

A 10-year veteran of the U.S. Marine Corps, Joe ran for a city council position in Riverside, Calif., in 1991 and managed successful campaigns for the Idaho state legislature. Co-author of “Banned: How Facebook enables militant Islamic jihad,” Joe wrote for Examiner.com from 2010 until it closed in 2016 and his work has been published at Newsbusters, Spokane Faith and Values and other sites. He now runs the Conservative Firing Line.