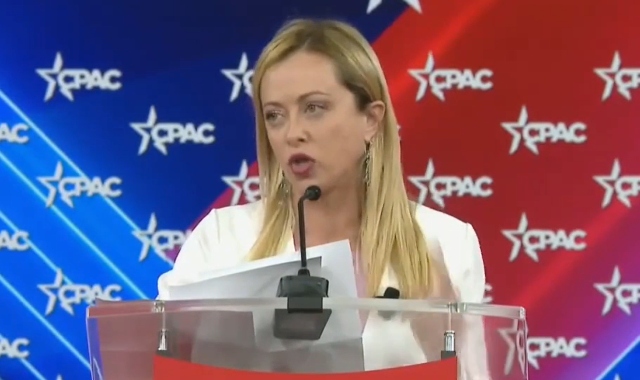 (Natural News) There is no better example of just how anti-Western culture the leftist elite in Europe and the United States have become than Giorgia Meloni’s rise to become Italy’s new prime minister.

Ordinarily, the elitist left would be touting the victory as a triumph for women (she is the country’s first female prime minister), but because she is against every culturally destructive tendency of the anti-West left, she is already being vilified as  the most “far-right prime minister since Mussolini.”

Only, World War II-era dictator Benito Mussolini was far-left, being an authoritarian and an avowed socialist. But facts don’t matter to today’s left any more than they have ever mattered to a political ideology that is hell-bent on destroying Western civilization, not strengthening it.

“I am Giorgia, I am a woman, I am a mother, I am Italian, I am Christian,” a fired-up Meloni told supporters in central Rome over the weekend as her right-leaning party won a majority of seats in the Italian parliament. “No one will take that away from me.”

Lost in the freak-out is the fact that Italians voted for her party, meaning they support the foundational pro-family, pro-Italian agenda — not the globalist agenda of left-wing anti-Western elites who have been adopting policies for decades that tear down the family, tear down traditions, and destroy the culture.

“Yes to natural families, no to the LGBT lobby! Yes to sexual identity, no to gender ideology! Yes to the culture of life, no to the abyss of death!” a passionate Meloni declared in a speech in June.

"I see the woke ideology destroying the foundations of the nature of family, attacking life, insulting religion… Will we surrender in front of this?! No, we will not! We will fight it standing tall!" pic.twitter.com/NZC7zLUcgJ

That is what Italians voted for, as Fox News’ Tucker Carlson noted during his Monday monologue while calling on Republicans to take up the same mantle as Meloni, speaking up for and acting on behalf of preserving and protecting our culture from the culture destroyers in the Democrat Party.

“It’s true here,” Carlson said after playing a clip of Meloni speaking about the cultural assault on her own country by the leftist elite. “American families are facing the very same onslaught from the very same poisonous ideologies. The difference is that in this country it’s rarely acknowledged except on the fringes.”

“Contrast that to what’s happening in the United States,” Carlson continued.

“House Republicans just spelled out what they’re running on. It’s a document called the ‘Commitment to America.’ It’s fine. Probably not much in it that you disagree with. Have you heard of it?” he asked.

“No, you probably haven’t! You probably haven’t read it. Nobody really cares. Because there’s nothing real in it. There’s not a single word in that document about the attacks on the American family that you see every day. That’s at the center of most people’s concerns. How are my kids? Will they have a life that resembles mine? That was called the American Dream. Does it still exist? No.” Carlson noted.

He added that leftists are calling Meloni (and MAGA Republicans) “fascists” when in fact, conservatives are just the opposite and that it is the left that behaves in a fascistic manner, adding that the left uses the word to describe anyone who disagrees with them.

“So, they hate your family, they hate your religion, and you don’t actually have to put up with it because it’s a democracy, and you’re supposed to be in charge, you being the population. That’s a radical message? God, family, country. That’s not radical. It’s hard to imagine a more wholesome message, a more pro-human platform. Fascists don’t believe in God because God is a rival to their power,” he said.