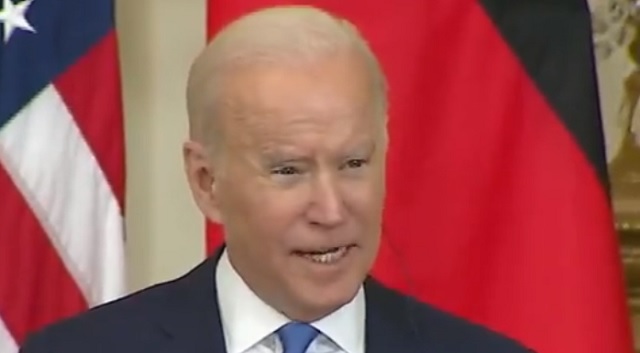 Joe Biden’s “promise” that “there will be no longer a Nord Stream 2” pipeline if Russia invades Ukraine is attracting new attention in the wake of the suspected sabotage of both Nord Stream 2 and Nord Stream 1.

“If Russia invades, that means tanks or troops crossing the — the border of Ukraine again, then there will be — there will be no longer a Nord Stream 2,” Biden threatened during a press conference with German Chancellor Olaf Scholz in February. “We will bring an end to it.”

“How will you do that exactly, since the project, and control of the project, is in Germany’s control?” a reporter asked.

Pres. Biden: "If Russia invades…then there will be no longer a Nord Stream 2. We will bring an end to it."

Reporter: "But how will you do that, exactly, since…the project is in Germany's control?"

Biden: "I promise you, we will be able to do that." https://t.co/uruQ4F4zM9 pic.twitter.com/4ksDaaU0YC

Undersecretary of State Victoria Nuland issued similar threats on January, warning: “If Russia invades Ukraine, one way or another, Nord Stream 2 will not move forward.”

.@UnderSecStateP Victoria Nuland: “If Russia invades Ukraine, one way or another, Nord Stream 2 will not move forward.” pic.twitter.com/hEGBrx6HJj

If the CIA just sabotaged Russian/European civilian infrastructure that would amount to an outrageous escalation of force putting all Americans at risk of a wider war with Russia.

“There is no doubt that these were explosions,” seismologist Bjorn Lund of Sweden’s National Seismology Centre told SVT on Tuesday.

The German magazine Spiegel reported Tuesday that the CIA “warned” the German government weeks ago during summer about “possible attacks on gas pipelines in the Baltic Sea.”

“From Ukraine's point of view, the permanent interruption of gas supplies from Russia to Germany would be a possible interest in the room. On the contrary, there would be immense political disadvantages that could arise from an attack.” pic.twitter.com/qziRb1gFUF

When asked about the prospect the pipelines were sabotaged, Kremlin spokesperson Dmitry Peskov said, “No option can be ruled out right now.”

UPDATE – The surface area of the largest Nord Stream gas leak shows a "disturbance" of well over 1 kilometer in diameter, according to the Danish armed forces. pic.twitter.com/u0r4cGjImo

“The destruction that occurred on the same day at once on three strings of the offshore gas pipelines of the Nord Stream system is unprecedented,” the operators of the Nord Stream pipelines said in a statement on Tuesday. “It is not yet possible to estimate the timing of the restoration of the gas transmission infrastructure.”