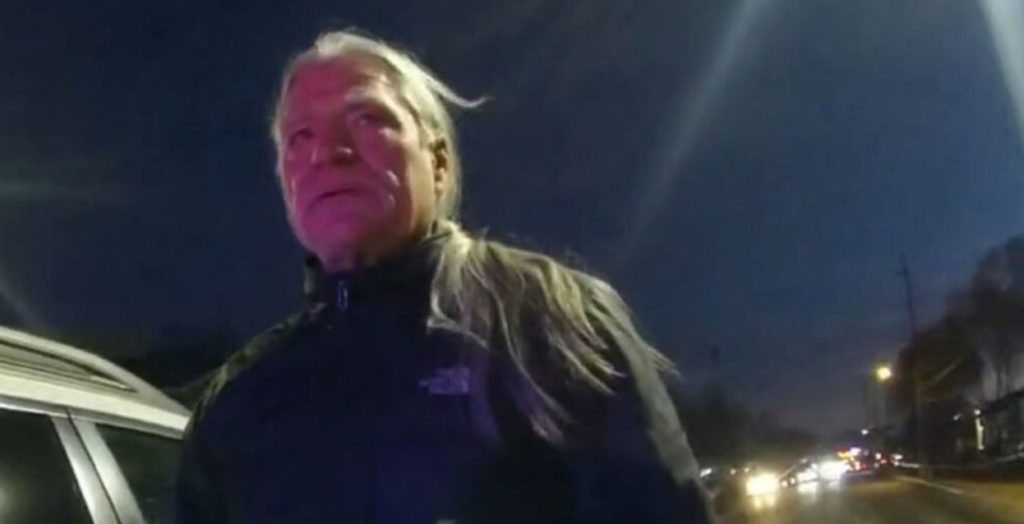 Hamblin is the first suspect to be arrested in the Utah County Sheriff’s Office (UCSO) investigation into reports of ritualistic child sexual abuse from as far back as 1990. In late May, the UCSO announced they were working with multiple county and federal agencies on the investigation which originally began in April 2021. The investigation subsequently discovered previous reports alleging “similar forms of ritualistic sexual abuse and trafficking” that occurred in Utah County, Juab County, and Sanpete County during the time between 1990 and 2010. TLAV has been reporting on the situation since early June.

Hamblin was booked for 3 counts of sodomy of a child, 1 count of rape of a child, 2 counts of aggravated sexual abuse of a child, and 1 misdemeanor count of lewdness involving a child. He has been ordered to be held without bail. According to the Probable Cause Statement (reader discretion advised):

“A female victim came forward in April 2022 to report that she had been repeatedly sexually assaulted by David Hamblin. The sexual assaults began when she was 6 or 7 years old in the mid 1980’s. The victim’s family resided in the same neighborhood as David, located in Provo, UT. The victim stated she would regularly play with David’s children and had been babysat on numerous occasion by David.

The victim asserted that the first sexual assault that she would recall, occurred when she was playing at the Hamblin residence. The victim recounted a time when she had been sexually abused when she was in the basement of the Hamblin home. The victim described a sexual assault where she and two others children were forced to stand in front of David Hamblin while he directed them to take turns, “sucking on his penis.” David forced each child to take turns giving him oral sex while he critiqued and criticized their abilities and efficacy of what they were commanded to do.”

The statement describes additional incidents of abuse, including one involving another female adult. It also notes that David Hamblin had his therapist license revoked by the State of Utah due to allegations of sexually abusing his clients. However, the investigation has found that he continues to perform “therapy” in the form of “healing circles”.

The UCSO’s Sgt Spencer Cannon, Public Information Officer, said, “We do anticipate more arrests. But it is a slow process.”

This case against David Hamblin will be prosecuted by Juab County Attorney Ryan Peters. Peters was specifically deputized as a special prosecutor by the Utah Attorney General’s Office for this case.

This move to deputize a special prosecutor from a different county may not bode well for current Utah County Attorney David Leavitt.

The Case Against David Leavitt

Following the May 31st announcement of the investigation by Utah County Sheriff Mike Smith, Utah County Attorney David Leavitt held a press conference where he shared a 151-page document titled “victim statement” related to a 2012 case involving allegations of sexual abuse of children. Leavitt and several other people are named in the statement as being involved with a group practicing ritual child sex abuse. He claimed the Sheriff’s investigation was a political attack on him related to the June primary elections in Utah.

Leavitt is the younger brother of former 3-time Utah Governor Michael Okerlund Leavitt. The father of the two men is Dixie Leavitt, the founder of the Leavitt Group, one of the largest independent insurance brokers in the nation.

During his press conference, David Leavitt described the 2012 report as “151 pages of utter baloney” and called the woman who made the allegations “tragically mentally ill.” He called for PIO Sgt. Spencer Cannon and Sheriff Mike Smith to resign.

When contacted for comment, Sgt. Spencer Cannon told The Last American Vagabond (TLAV) that one of the “most disturbing and disappointing” aspects of the investigation was “when Leavitt came out and referred – FIVE TIMES – to the victim as “tragically mentally ill” – HIS WORDS!” He continued:

We can now confirm that the 2012 case mentioned by Leavitt and Smith was related to David Hamblin. In 2012, Hamblin was arrested on similar charges to the ones he faces now. The Utah Daily Herald reported at the time:

The charges are based on events that reportedly happened between 1991 and 1998.”

Charges against Hamblin would be dismissed without prejudice in 2014, meaning they can be refiled again, as we saw this week.

Despite David Leavitt’s claims that the accusations by one of Hamblin’s alleged victims were “utter baloney” or “ludicrous”, courtroom audio recordings obtained by KSL Investigators shed some light on the dismissal of 18 felony child sexual abuse charges against David Hamblin.

First, Leavitt told KSL that his predecessor, prosecutor David Sturgill, dismissed the case because “the allegations were so untenable and unbelievable.” But, as KSL reports, his statements do not line up with the court recordings.

“The allegations are some of the worst allegations of sexual abuse that I’ve come across in the many years that I’ve been prosecuting these types of cases,” Sturgill said during a hearing in May 2013. KSL notes that at this same hearing defense attorney Michael Esplin recognized the gravity of the accusations, stating “If Mr. Hamblin is convicted of these charges, he will never see the light of day. I mean, these are – he’ll be there for the rest of his life in prison.”

KSL notes that neither the prosecution nor the defense “shared concerns during the hearing that the allegations were outlandish or unbelievable”. Instead, it appears the case was eventually dismissed because of difficulties in obtaining records and taking victim statements. At a hearing in March 2014, former Utah County Attorney David Sturgill moved to dismiss the charges to potentially refile the case at a later date.

“There’s a lot more that needs to be done with this case, and it’s just not coming together,” Sturgill said. “I’m getting resistance from DCFS (Division of Child and Family Services)… and then there’s other medical records that we’re having some trouble gathering. A lot of it’s due to just the age of this case. It’s an extremely delayed disclosure.”

At the very least, these recordings reveal that Utah County Attorney David Leavitt’s efforts to dismiss the Utah County Sheriff’s investigation to be a farce. Despite his efforts to derail the investigation as “baloney” Leavitt has created more interest in his potential role in the case. So what exactly is in the victim’s statement and how does it related to Leavitt?

Before diving into the accusations against David Leavitt, it’s worth reminding readers that he, like all Americans, is assumed to be innocent until proven guilty in a court of law. We do not share this information to impugn or accuse him of crimes we currently do not have evidence for. However, as a public figure in law enforcement with a controversial past, Leavitt should be questioned and held to a higher standard than your average person. Especially because it is David Leavitt who brought himself into this investigation by holding his press conference and outing himself as one of the accused child abusers.

The document in question is labeled “Victim Statement #3” and is one of 8 different victim statements included in a larger file from the Provo Police Department’s investigation into David Lee Hamblin. TLAV is making the files available for all researchers.

A chart describing “Experience #50” lists David and Rosie Hamblin, and David Leavitt as people involved in abuse between 1993 and 1995 at a house in Provo. Under a section titled “Other Occurrences, Times, and Locations” it states:

“This happened at nearly every party or when people came over to our homes, however the frequency refers to how many times this happened with David Leavitt. This also happened when we were at parties of other group members, like when we were at Gordon Bowen’s house for a few different parties. REDACTED often pushed us on to many people trying to get us to have sex with them. She did this at many parties and places she took us.” 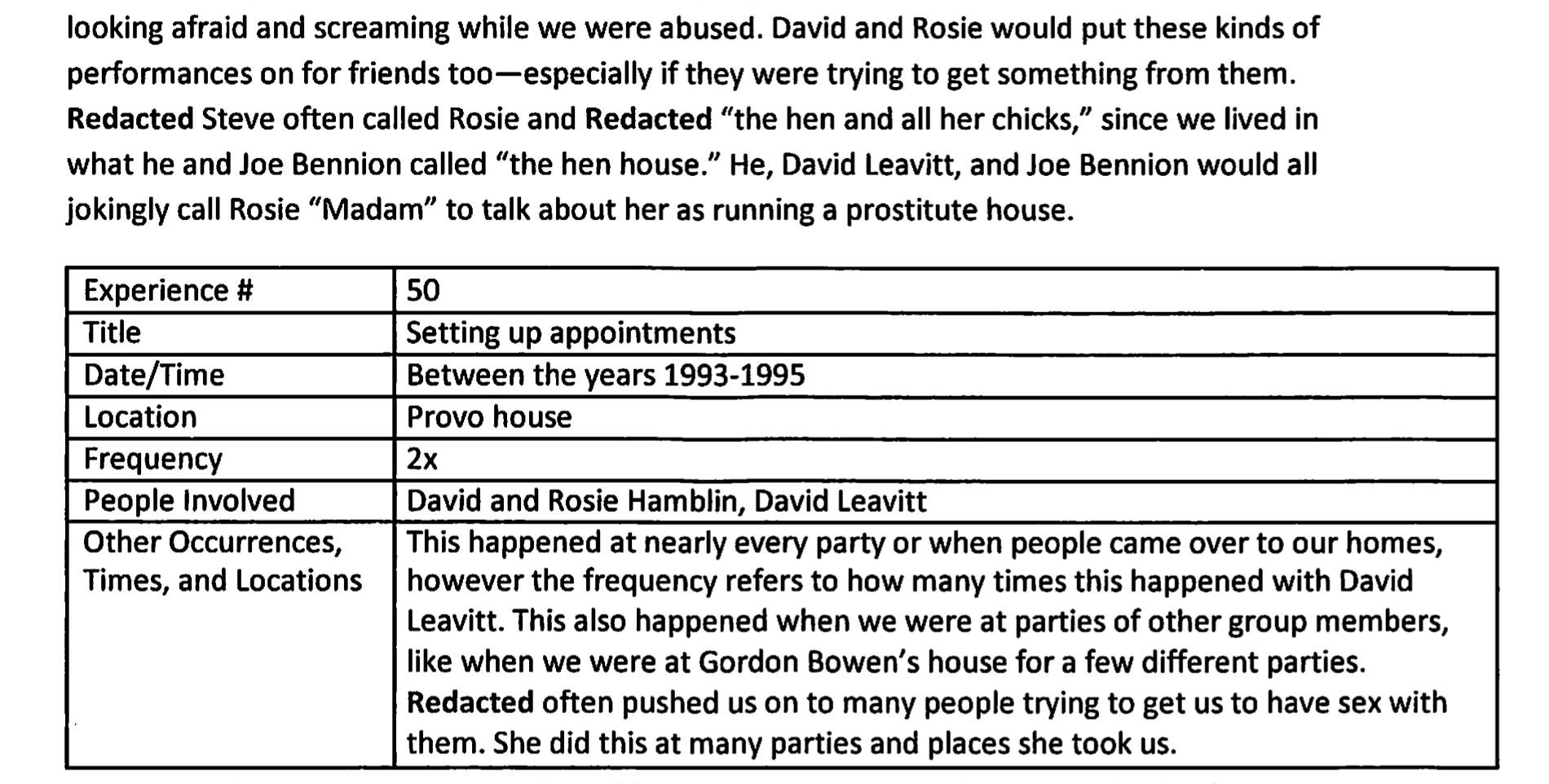 The alleged victim goes on to describe David Hamblin and David Leavitt remarking about how they were the “cutest thing”. The statement says “David L. grabbed me around the waist and said that he would love to do that, and kissed me on the forehead. Rosie walked away and on the way out David L. said to David H. that he was going to stop by in the next couple days.”

The statement goes on for another 150 pages describing 118 cases of ritualized sexual abuse.

The UCSO has not commented on whether David Leavitt is currently a suspect in the new investigation or if he will be questioned regarding his relationship to David Lee Hamblin. TLAV will continue to report on the investigation as it develops.

Buried within the other victim statements are also claims of the abusers calling out to “Satan” and “Lucifer” in their ritualistic abuse. TLAV will also be exploring these documents and claims in the coming weeks.