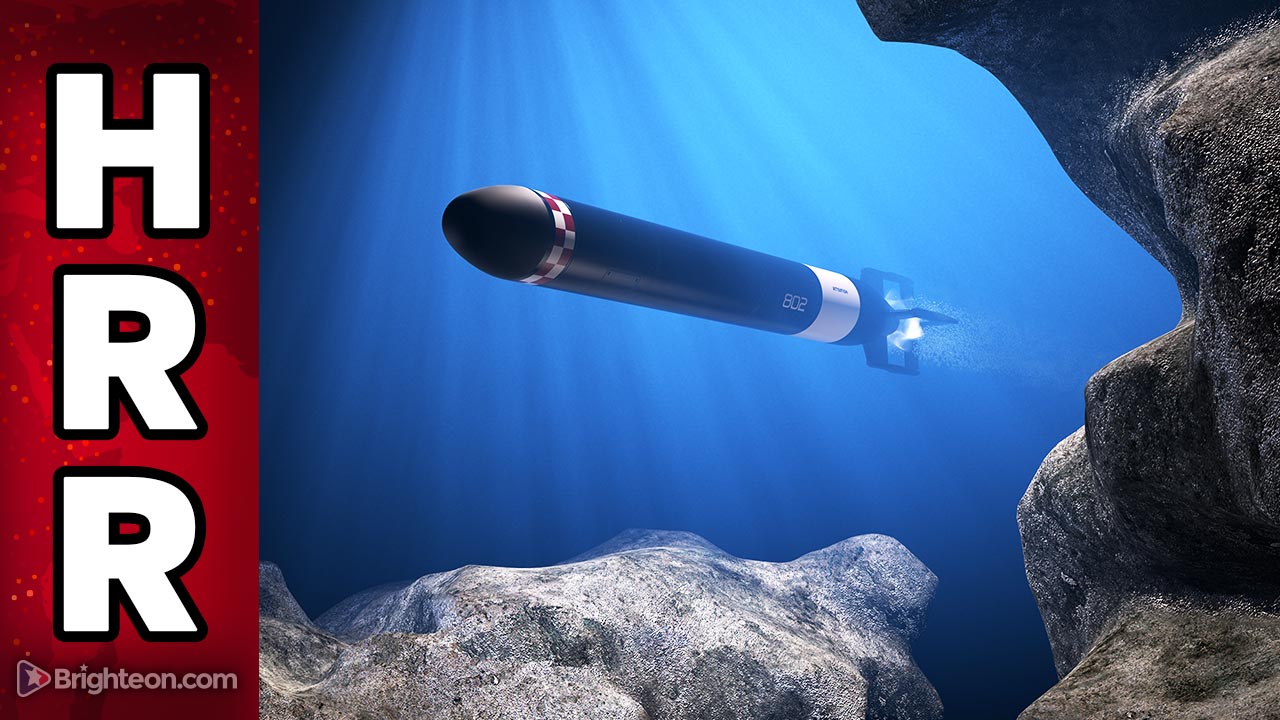 (Natural News) According to multiple media reports — including The Sun (UK) — Russia has now officially deployed the world’s largest submarine which can carry up to eight “apocalypse drone” torpedoes. These super weapons are actually nuclear-armed underwater drones which are designed to hide themselves off the coast of a targeted nation, then detonate their nuclear warheads upon receiving satellite commands, generating a highly destructive, radioactive tsunami that inundates coastal areas of the targeted country, rendering them uninhabitable.

The K-329 Belgorod submarine is the only one of its kind in the world, and it reportedly can travel at a speed of 125 mph using a secret, highly-advanced propulsion system. Officially, the Posiedon drones carry 2 megaton warheads, but we have received information from other sources that indicates Russia can outfit them with 100 megaton warheads — over 6,000 times more powerful than the atomic bomb used over Hiroshima.

Upon detonation, such a warhead would unleash a truly massive tsunami that could potentially reach heights of 500 feet or more, moving at hundreds of miles per hour before crashing onto intended coastal targets. The radioactive ocean water would deposit radioisotopes onto everything it touches, rendering the affected areas uninhabitable for at least three centuries (that’s ten half lives of Cs-137, fyi). 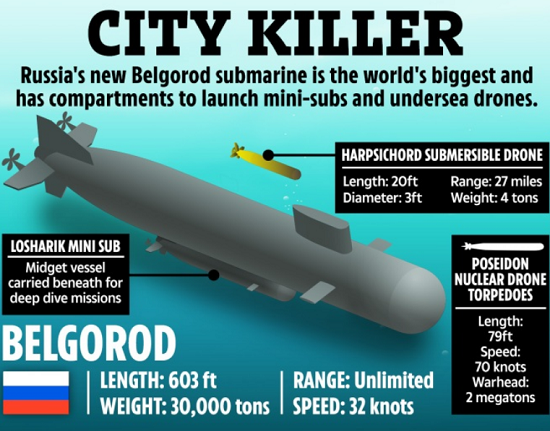 The Belgorod submarine was built using exotic technology that allows it to achieve almost unimaginable speeds (125 mph) while still operating covertly. As The Sun reports:

The revolutionary design – based on the Oscar II class cruise missile subs – has been extensively modified to specialise in covert missions. The sub was made its giant length so it could carry the devastating nuclear-tipped Poseidon torpedoes guided by artificial intelligence. The nuke can be dropped onto the seabed by a sub or ship and zoom past underwater defences at reported speeds between 70 and 125 knots.

Christopher A Ford, a former assistant secretary of state for International Security and Non-Proliferation, told CNN the torpedo is being designed to “inundate US coastal cities with radioactive tsunamis”.

No country in the world has any defense against radioactive tsunamis, by the way.

Now, the US is resorting to cutting off the energy supply needed by millions of Europeans as they face a winter of food scarcity and freezing temperatures, with as much as half of Germany’s industrial operations facing shut downs due to a lack of natural gas energy. (Ammonia production is already down 70%, and industrial metals smelting operations are down 50%, and those numbers are weeks old.)

Putin explains that the United States has set the precedent justification for nations that are faced with the threat of destruction to use nuclear weapons in their own defense, to strike civilian targets if needed. Note that Putin deems the West to be a “satanic” cabal of criminals, while his defense head Medvedev describes the West as the “Antichrist civilization” that must be brought to its knees for humanity to survive.

Thus, it appears that Putin is preparing a large-scale nuclear first strike against the West, planning the complete destruction of western nations like the United States, United Kingdom, Germany, France, Canada and others. Super weapons like the Posiedon nuclear “apocalypse drones” are clearly designed to achieve that goal, while shorter range nuclear-capable continental missiles (such as the Iskander) would be unleashed to strike European cities such as Berlin, Paris and London.

It also appears this destruction of the West is desired by globalists who want to see America annihilated so that national sovereignty can be wiped from the slate, with the remaining survivors enslaved under globalist control. The United States of America is “scheduled” to be reduced to under 100 million survivors by 2030. This could be achieved through multiple means (vaccines, famine, bioweapons, power grid sabotage, etc.) but is most quickly achieved by the globalists through the use of nuclear weapons that target infrastructure such as finance and transportation.

Another important point is that Democrats want a nuclear war before the Nov. 8 midterm elections because they don’t want to have to endure defeat at the ballot box. They need a nuclear emergency to delay the elections and invoke a kind of martial law to push nationwide gun confiscation. This is the only way they can remain in power and continue their agenda of child mutilations (transgenderism surgeries), criminalizing their political opposition (DOJ / FBI weaponization), censorship, vote rigging and money laundering (money for Ukraine).

If democracy is allowed to breathe in America, the Democrats are done. Nobody wants the agenda that Biden and the demonrats are serving up. Thus, the Democrats must find new ways to interfere with democracy and halt the will of the people.

We also need to understand that the criminal cabal currently running the United States is at war with Europe, attempting to reduce Europe’s industrial base to rubble in order to make sure America has the last western factory left standing. In addition to the USA destroying the Nord Stream pipelines (which the lying corporate media claims was for some reason carried out by Russia), the Federal Reserve is waging a currency war against the Euro and the Bank of England.

As the Wall Street Journal reports:

The Federal Reserve and other central banks risk pushing the global economy into recession followed by prolonged stagnation if they keep raising interest rates, a United Nations agency said Monday.

…the United Nations Conference on Trade and Development said the Fed risks causing significant harm to developing countries if it persists with rapid rate rises. The agency estimated that a percentage point rise in the Fed’s key interest rate lowers economic output in other rich countries by 0.5%…

Rising interest rates are causing a wave of capital to leave Europe and head to the United States. Higher rates are also devastating the value of fixed rate bonds which were heavily purchased by England’s pension funds which are now on the verge of total collapse.

In addition, the Credit Suisse bank is reportedly on the verge of insolvency, and a cascading collapse of European banks is a mathematical certainty of US banking interest rates continue to rise. The Fed has said multiple times it is determined to keep raising interest rates until inflation is brought under control, which would require multiple rate increases well into 2023.

Realize that if interest rates don’t increase, inflation will spiral out of control in the USA. If interest rates continue to rise, Europe will suffer an economic meltdown. It’s clear the Fed is choosing the latter of those two options, which is why many observers have concluded the United States is waging an “economic war” against Europe at the very same time the USA is waging a kinetic and economic war against Russia.

Oblivious Germans suddenly panic buy electric space heaters, having no clue how they are powered

Finally, in the latest example of insane levels of ignorance and lack of preparedness, a large number of German consumers are reportedly panic buying electric space heaters following comments by energy minister Habeck who recently stated that Germany might run out of gas energy supplies.

The panic buying of electric space heaters reveals that many German citizens had no idea winter was coming or that an energy crisis had already impacted their country. It’s as if millions of German citizens have no memory of last year’s winter, somehow. Or maybe they believe the lies of their own government which is telling them there are no problems, that everything will be fine. (If so, they need a sanity check…)

Even worse, they seem to be oblivious about what powers electric space heaters. Not only will they be paying 1000% or higher increases on their electric bills, but that electricity is largely generated by the very same natural gas that Germany won’t have, especially since the Nord Stream pipelines were already blown up and can’t be repaired this winter. So, if millions of Germans turn on their electric space heaters, German utility companies will see a huge spike in electricity demand, requiring them to consume more gas which is already likely to run out.

Somehow, nobody in Germany seems to be pointing this out. The country appears to be acting as some sort of “green suicide cult” of herd-mentality mass obedience acolytes who can’t wait to obliterate their own infrastructure and industry. Meanwhile, they seem to have zero knowledge of how heat, electricity and hydrocarbons actually work, an ignorance shared by nearly all the socialist greens in Europe and around the world. They seem to think that electricity comes from nowhere, so using electricity to heat homes is somehow not going to require energy inputs or something.

Get more details on all this (and much more) in today’s Situation Update podcast, which also features a fascinating interview on asset protection with “Dan” from iAllegedly (that’s his YouTube channel).