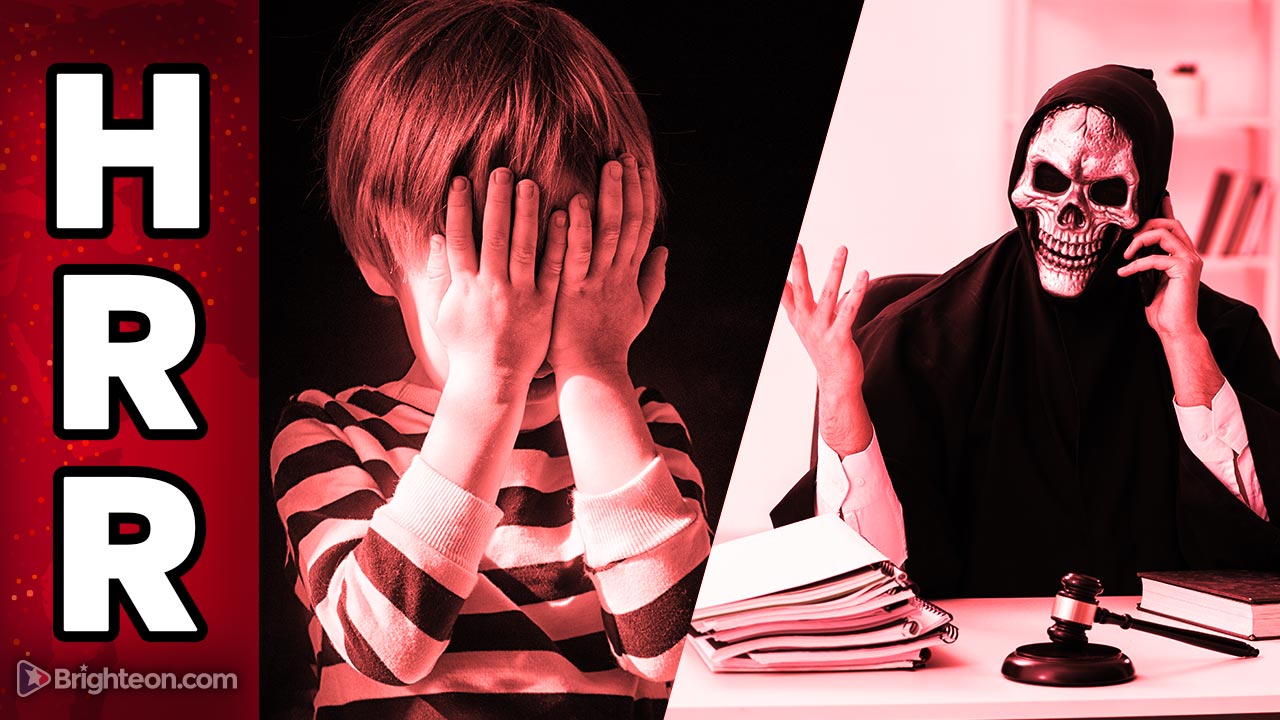 (Natural News) In a shocking act of medical tyranny and authoritarianism, the American Medical Association is now demanding that the DOJ arrest and prosecute anyone who opposes surgical child mutilations carried out in US hospitals that fraudulent claim they are “affirming” a child’s “gender identity” by maiming them with medical violence.

When they get caught abusing children, the first resort of the leftist abusers, whether it’s the National School Boards Association or the American Medical Association is to label their opponents ‘domestic terrorists’ and demand that the Biden administration use the DOJ to arrest and silence them.

Now, the AMA is pro-mutilation, putting the organization in the same moral category as serial murderers, rapists or Holocaust operatives.

Any doctor who remains a member of the AMA is now aligned with the for-profit mutilations of children in the name of “wokeism,” and America’s medical establishment joins the ranks of communist China with its forced organ harvesting in terms of outrageous acts of evil committed against humanity.

If they will mutilate children for profit, what other crimes will they commit against adults to make more money?

Furthermore, if AMA member doctors are willing to mutilate children for profit, what else are they willing to do for extra revenues? Could they perhaps falsely diagnose people with cancer so they might earn more money administering medically unnecessary chemotherapy? (Of course they do.) Might they falsely claim people have “complex COVID” so they can earn an extra $500K for their hospital by putting those people on ventilators and remdesivir, killing them in the process? This is the substance claim of a lawsuit that has already been filed against three hospitals in Fresno, California, which the lawsuit says profited by committing medical fraud and essentially murdering their own patients.

If the AMA is willing to mutilate children for profit, any rational person has to assume there’s no line they won’t cross. There’s nothing AMA-member doctors won’t do — no matter how evil — to make more money off the pain and suffering of innocent children and adults.

“Evidence-based medicine” is a joke: There’s ZERO evidence that a child can change their gender through surgery and chemical castration

The claims of the AMA, Big Pharma and western doctors who say they only practice “evidence-based medicine” are absurd, if not downright fraudulent. No evidence exists whatsoever to claim that covid vaccines are proven safe and effective for any human being. The clinical trials were skipped, and the FDA resorted to Emergency Use Authorization (EUA) under the false panic of the plandemic to skip the long-term trials and simply declare mRNA injections to be safe, without supporting evidence.

And now, as Revolver.news is reporting, Big Pharma refuses to turn over mRNA data for independent assessment, indicating they are hiding the truth and committing an historic, global fraud in pushing covid “vaccines” that are neither safe nor effective:

In scientific circles, doubts arise as to whether the information provided by the manufacturers about the mRNA vaccine is correct. Biontech/Pfizer and Moderna have so far refused to independently verify the data. A Stiko member is now also criticizing.

Virologists, epidemiologists, pharmacologists – they may not have always been friendly to each other during the pandemic. But they are now coming together on one point: it is the demand for an independent review of the studies that led to the approval of the mRNA vaccines from Biontech/Pfizer and Moderna. The studies are published. However, the primary data, scientifically the decisive documents, are missing. All vaccine evaluations of the registration studies are based on them. Until now, the documents have been kept under lock and key by the manufacturers, and they are refusing requests to see them.

Similarly, there is zero evidence that a child can consent to a genitalia mutilation procedure under the delusional fairy tale belief that a person can “change their gender” through the use of a scalpel. This ludicrous idea being pushed by LGBT leftists (and complicit surgeons) is founded on the psychotic belief that children are born in the “wrong” bodies and that surgeons with scalpels can “correct” their biology by cutting off existing organs and making new holes or appendages to simulate replacement organs.

Mark my words: One day soon, in the not-too-distant future, this practice will be seen as the true HORROR it has become, alongside the gassing of the Jews, the mass starvation of Ukrainians via the Holodomor, or the Cultural Revolution genocide of communist China under Mao.

We are watching crimes against humanity unfolding right before our very eyes, with the full blessing of both the AMA and the AAP (American Academy of Pediatrics), who are literally invoking the DOJ as a kind of “medical Gestapo” to silence anyone who opposes the violent mutilation of children.

“The worse the crime, the more the need to resort to police state tactics by the same leftists who accuse conservatives of being ‘authoritarians’,” writes Greenfield.

Even Adolf Hitler didn’t mutilate children for profit, but AMA doctors and surgeons do!

This is not hyperbole: Western Medicine has now declared it is in the mutilation business, forever cementing its own fate to go down in history as a dark art of quack science, child abuse and human rights violations that will reverberate throughout history for centuries to come. Future historians will look back upon this time and shake their heads in disbelief that an entire class of so-called “doctors” would applaud the surgical mutilation of children, aghast at not only the practice itself but at the arrogance of the AMA demanding that the DOJ investigate and arrest anyone who opposes the practice.

The message is rather clear: If these AMA doctors can’t murder you with remdesivir, depopulate you with vaccines or mutilate your genitalia with scalpels, they will unleash the full might of the police state against you to threaten and silence you into compliance.

Western medicine has become a criminal cartel of violent mutilators who prey upon the young. After surviving the covid vaccine holocaust that has already killed millions around the world, why are we not surprised?

This is worse than Hitler, for even as Hitler murdered millions of innocent Jews, he did not mutilate children and call it “medicine.” He did not brainwash an entire generation of young people into hating their God-given bodies and try to manipulate them into surgical harm.

Indeed, Hitler murdered millions and gassed innocent men, women and children to death using chemical weapons (developed, ironically, with the help of a pharmaceutical giant named Bayer), but even Hitler did not slice off the breasts of little girls or the penises of little boys. Even in his own twisted, sick mind, such acts of horrific violence were probably unthinkable.

Yet those very horrors are now the “accepted” practices of today’s mainstream surgeons and doctors. The medical establishment is now an industry of medical violence against children, and the AMA has lashed itself to one of the most horrific evils ever carried out in the history of the world. Even China, with its organ harvesting of the Falun Gong, doesn’t mutilate children for profit. That designation appears to be emerging solely from western medicine (steeped in depopulation vaccines and deadly pharma drugs), where the very same nations who claim to be pro-Ukraine, pro-democracy and pro-choice are permanently mutilating the bodies of children, taking away their choice to revert back to their actual God-given gender and to be whole in their birth bodies. Once the organs are sliced off, after all, there’s no getting them back. These children will grow up to be physically and psychologically scarred victims of a medical establishment gone criminally insane.

As one commenter writes: (DasWrite, via Front Page Mag)

Add the AMA to that rapidly growing list of once respected organizations, including the FBI and the DOJ itself, that need to be disbanded or extensively reformed. They’ve abused whatever authority they had by allowing themselves to be weaponized by leftist ideologues for so long that they’re no longer forces for good but tools for totalitarian oppression.

We pray that a wave of lawsuits seeks substantial damages from these surgeons and hospitals for maiming children for profit, ruining their lives in the process. The AMA and AAP should both be named in the suits and held accountable for their promotion of these child mutilations carried out for profit. Alex Jones is being sued for hundreds of millions of dollars right now for harming no children at all and carrying out no acts of violence, merely speaking his opinion about a school shooting, an opinion which he soon corrected when new information was available. Yet AMA member doctors and surgeons are literally mutilating children with glee, for profit, marketing their services on social media (to children) and bragging about their mutilation achievements to a complicit corporate media that endorses the charade.

More importantly, if the DOJ were to arrest and criminally prosecute anyone in this scenario, it should be the doctors, surgeons, hospitals and AMA executives who are carrying out these heinous crimes against children, all in violation of the AMA’s own guidelines for medical ethics, by the way. There are crimes against children being carried out right now in America, and the parties carrying out those crimes aren’t even hiding it… they’re bragging about it.

Medical violence against children must stop.

The medical establishment in America has become a cabal of torturers, mutilators, murderers and propagandists. Please God make it stop…