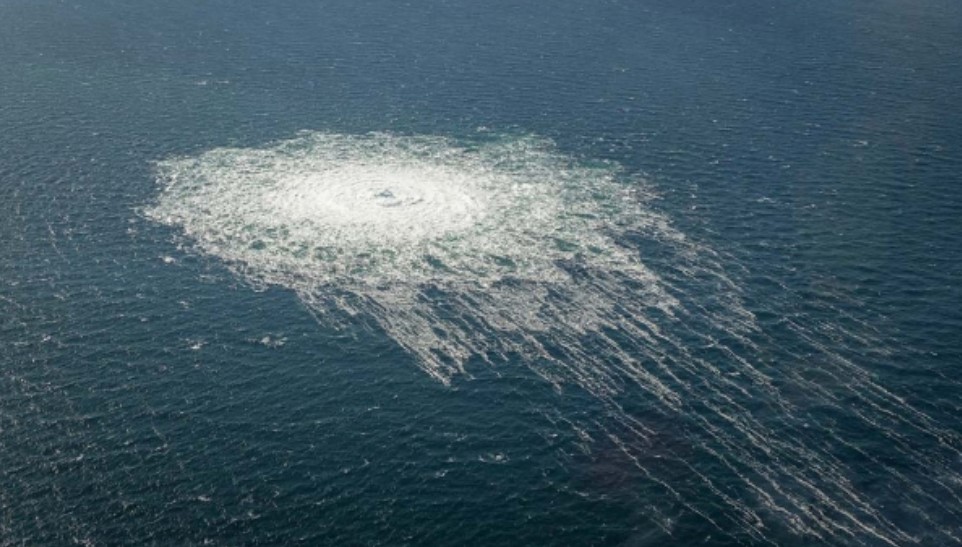 The Western political/media class has been dismissing as “conspiracy theories” all claims that the US is likely responsible for last month’s sabotage of the Nord Stream gas pipelines, even while leveling the exact same accusations against Russia without ever using that term. Which probably says a lot about the way that label has been used over the years, if you think about it.

“It’s important that we use this meeting not to foster conspiracy theories, but to focus our attention on Russia’s blatant violation of the Charter and its crimes in Ukraine,” Mills argues, after saying that “the United States categorically denies any involvement in this incident” and that there is no justification for “the Russian delegation raising conspiracy theories and mass disinformation in this Council.”

Mills then hilariously spends the remainder of his remarks insinuating that it is actually Russia who perpetrated the attacks, mentioning the word “infrastructure” no less than nine times in his arguments to establish that in Ukraine, Russia has a history of attacking critical civilian infrastructure similar to the pipelines.

“Sabotage of critical infrastructure should be of concern to us all,” Mills says. “In the context of Russia’s aggression against Ukraine, we have seen numerous Russian attacks damaging civilian infrastructure. We witnessed Russia recklessly seize control of Europe’s largest nuclear power plant, risking a nuclear disaster in Europe. We saw countless attacks destroying civilian electricity infrastructure.”

“Despite efforts that we heard today to distract us from the truth, to distribute more disinformation and slightly wacky theories, the facts on the ground in Ukraine speak for themselves,” Mills concludes.

The sabotage of gas pipelines were a 'warning shot' from Putin to the West, and should brace for more subterfuge, Russia experts warn https://t.co/IvH6YmFh4b

Business Insider has a new article out titled “The sabotage of gas pipelines were a ‘warning shot’ from Putin to the West, and should brace for more subterfuge, Russia experts warn.” The “experts” in question are as follows:

That’s it; that’s all the experts. Two lying warmongers and a history professor.

Nowhere in the Business Insider article do the words “conspiracy” or “theory” appear. Contrast this with the recent Associated Press article titled “Russians push baseless theory blaming US for burst pipeline,” which was so frantic to spin accusations of US Nord Stream sabotage as a crazy conspiracy theory that it framed it as something only QAnon cultists believe.

“The suggestion that the U.S. caused the damage was circulating on online forums popular with American conservatives and followers of QAnon, a conspiracy theory movement which asserts that Trump is fighting a battle against a Satanic child-trafficking sect that controls world events,” AP wrote.

Still laughing at how frantically over the top AP went with its "blaming the US for sabotaging Russian pipelines is a baseless conspiracy theory" article. pic.twitter.com/avXgXYM5yP

Over and over again we see the pejorative “conspiracy theory” applied to accusations against one nation but not the other, despite the fact that it’s the exact same accusation. They are both conspiracy theories per definition: they’re theories about an alleged conspiracy to sabotage Russian pipelines. But the Western political/media class consistently applies that label to one and never the other.

Do you get the message? Are you receiving the messaging loud and clear? Accuse the US of sabotaging the Nord Stream pipelines and it’s called a conspiracy theory. Accuse Russia of doing the exact same thing and it’s called news.

And of course by pointing out this cartoonish double standard I do not mean to suggest that both theories are equally well-evidenced. One wouldn’t expect them to be in a contest in which one party had their own energy infrastructure sabotaged.

According to @SecBlinken, the Nord Stream pipeline bombing "offers tremendous strategic opportunity for the years to come." Too bad that this tremendous opportunity for DC bureaucrats will come at the expense of everyone else, especially this coming winter. pic.twitter.com/T2eacQUuBF

For example, there’s the fact that Secretary of State Antony Blinken explicitly said that the sabotage of pipelines delivering Russian gas to Germany offers a “tremendous opportunity” to end Europe’s dependency on Russian energy. There’s also the fact that a 2019 Pentagon-commissioned study by the RAND Corporation on how to overextend and weaken Russia explicitly stated that the US would benefit from stopping Nord Stream 2. There’s also the fact that both President Biden and his Under Secretary of State for Political Affairs Victoria Nuland explicitly said that Nord Stream 2 would be brought to an end if Russia invades Ukraine, the fact that the US sanctioned those who built Nord Stream 2, the fact that former secretary of state Condoleezza Rice is on record saying the US wants Europeans to be more dependent on North American energy than on pipelines from Russia, the fact that Germans had just been angrily demanding an end to US-led sanctions on Russia and a reopening of Nord Stream gas, the fact that US naval forces were recently conducting unmanned underwater vehicle drills right where the pipelines were attacked, the fact that unmanned underwater vehicles have been found carrying explosive charges near Russian pipelines in the past, the fact that Poland literally just inaugurated a gas pipeline that will transport gas from Norway through Denmark and the Baltic Sea, the fact that US military helicopters were reportedly recorded traveling between the blast points and along the Nord Stream 2 pipeline shortly before the explosions, and the fact that the CIA has a known history of blowing up Russian gas pipelines.

But sure, if you think the United States could have any responsibility for this attack at all, you’re a crazy conspiracy theorist and no different from QAnoners who think pedophile Satan worshippers rule the world.

Okay, empire. Message received. Does make me wonder about some of those other “conspiracy theories” you’ve told us to ignore, though.

My work is entirely reader-supported, so if you enjoyed this piece please consider sharing it around, following me on Facebook, Twitter, Soundcloud or YouTube, buying an issue of my monthly zine, or throwing some money into my tip jar on Ko-fi, Patreon or Paypal. If you want to read more you can buy my books. The best way to make sure you see the stuff I publish is to subscribe to the mailing list for at my website or on Substack, which will get you an email notification for everything I publish. Everyone, racist platforms excluded, has my permission to republish, use or translate any part of this work (or anything else I’ve written) in any way they like free of charge. For more info on who I am, where I stand, and what I’m trying to do with this platform, click here. All works co-authored with my American husband Tim Foley.