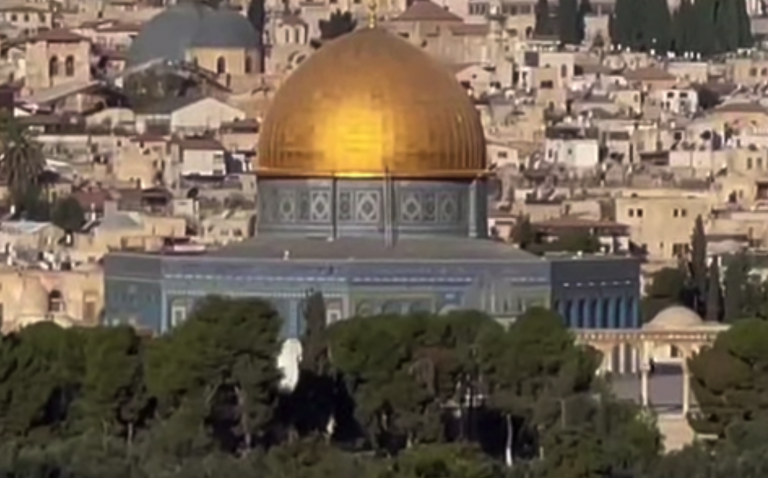 Whenever something unusual happens on the Temple Mount we should pay attention, and it appears that something extremely unusual may have just taken place there.  On the morning of October 16th, which also happened to be the seventh day of the Feast of Tabernacles, some sort of a bright white “anomaly” could be seen hovering over an open area in front of the Dome of the Rock.  Video footage of this “anomaly” was captured by a man that lives on the Mount of Olives named Josh Wander.  Since he actually lives there, Wander is very familiar with the Temple Mount and he says that he has never seen anything like this before.  I have watched Wander’s video several times now, and I do not know what it is.  Hopefully someone else captured video of this “anomaly” from another angle, and if anyone out there is able to find such a video please send it to me.  Ultimately, this may turn out to be nothing, but on the other hand we should not just dismiss this video evidence for no reason.  If we did just witness some sort of a supernatural sign on the Temple Mount, that should definitely be a wake up call for all of us.

Wander says that the anomaly looked like “a giant white sheet” or “a wedding dress” to him.

But at one point in the video you can actually see a person walking either in front of it or behind it.

To me, it appears that the person was walking behind it.

Whatever this “anomaly” was, it was much larger than the person.

Some people online have suggested that it could be a ghost or that light could simply be reflecting off the Dome of the Rock.

And perhaps there is some sort of a simple explanation to this.

When Wander talked to some people that had actually been on the Temple Mount at that time, they said that they had not seen “anything out of the ordinary”…

Wander inquired about the apparition from people who had been on the Temple Mount at the time of the sighting and none reported seeing anything out of the ordinary.

So the truth is that we may never know what this was.

But it is very interesting to note that this occurred on the morning of the seventh day of the Feast of Tabernacles.

According to Jewish tradition, this day is called “Hoshana Rabbah”, and it is considered to be one of the most important days of the year…

The seventh day of Sukkot is called Hoshana Rabbah, and is considered the final day of the divine “judgment” in which the fate of the new year is determined. It is the day when the verdict that was issued on Rosh Hashanah and Yom Kippur is finalized.

Four years ago, Wander filmed a “cloud” that suddenly appeared on the Temple Mount, and this also occurred during the seventh day of the Feast of Tabernacles…

On Sunday, a group of Jews praying on the Mount of Olives witnessed a large white cloud rise up out of the ground from the Temple Mount.

The phenomenon was recorded by Josh Wander, a Mount of Olives resident. A sunrise prayer session was organized on a plaza overlooking the Temple Mount for the holiday of Hoshana Rabbah, the last day of the week-long holiday of Sukkot (Feast of Tabernacles).

“Just after sunrise, I was recording a Facebook live video of the prayers when I panned my camera to the Temple Mount,” Wander told Breaking Israel News. “All of a sudden, I noticed a cloud or fog that erupted from the northeastern corner of the mount. It seemed to be coming from the area which was designated for women in the time of the Temple and the eastern gateway, which confused me, since I know that today, it is an orchard of olive trees and there is normally no activity there.”

Could these two events which happened exactly four years apart on the Hebrew calendar be connected somehow?

The reason why Wander’s video of this new anomaly immediately got my attention is because I am watching Jerusalem very carefully.

I expect very big things to start happening, and we know that Israel plays a central role in the fulfillment of Bible prophecy in the last days.

War with Iran could erupt at any time, and there have been numerous clashes between Palestinians and Israeli police in recent days…

Rioting Palestinians clashed with Israeli police in several locations across East Jerusalem Wednesday night and early Thursday, as forces continued to hunt for a Palestinian suspected of a deadly shooting attack on a checkpoint days earlier.

Protesters hurled rocks and Molotov cocktails, launched fireworks and set tires and garbage dumpsters on fire in several neighborhoods, blocking roads as they faced off against Border Police officers deployed in Palestinian areas of the capital.

Meanwhile, more Jewish people than ever have been visiting the Temple Mount during the High Holidays…

More than 6,000 Jews visited the Temple Mount in Jerusalem’s Old City since the start of the High Holidays — a new record for monthly visits, according to an advocacy group.

Yaraeh, which promotes Jewish visits to the flashpoint holy site, reported the figure on Friday, the 19th day of Tishrei, with the number expected to further grow over the last 11 days of the Jewish month.

Once again, I want to stress that we cannot prove that this “anomaly” which just appeared on the Temple Mount was something significant.

It may have been, but it might not have been.

But what we do know is that the God of the Bible is very real, and we should expect that He will do “unusual” things in the land of Israel in the last days.

And this will particularly be true for the city of Jerusalem.

God tends to surprise us during His appointed times, and we may have just seen an example of that.

From this point forward, I think that all of us should be on high alert during all of the appointed times on the Biblical calendar.