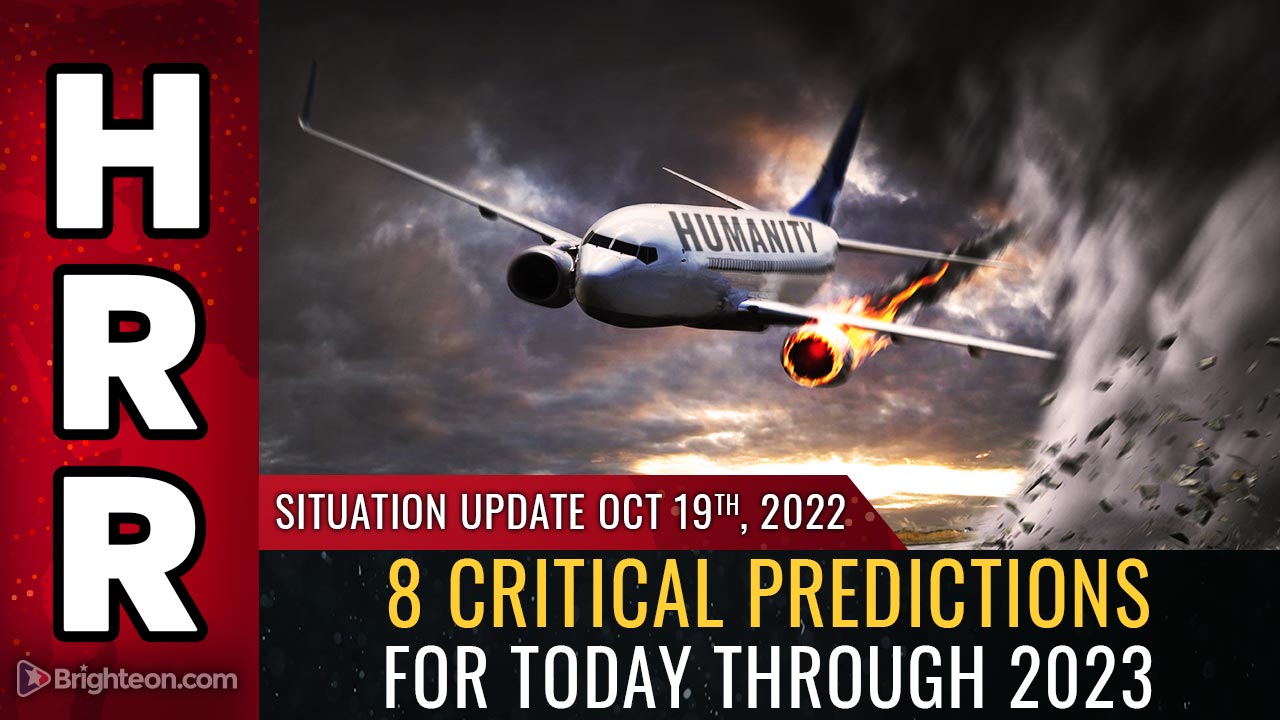 (Natural News) While 2022 isn’t yet over — and there’s still a risk of a false flag event before Election Day — from what we already know about what’s coming, 2023 is going to be a far worse year on several fronts. First, food scarcity is going to get a whole lot worse across the globe. Energy scarcity will reach its peak in early 2023 as the Northern Hemisphere endures a freezing winter. A wave of layoffs are coming for Americans in early 2023, and both inflation and unemployment are going to significantly worsen.

All those things are set in stone and cannot be changed. Yet there are other significant risk factors that may or may not emerge, depending on world events. Those include:

Right now, we are mere weeks away from the mid-term elections, and the Biden regime is desperate to spark a war, unleash a pandemic, take down the power grid or do something drastic that will halt the election and keep his regime in power indefinitely. But there exist powerful, positive forces inside the system that are thwarting some of these efforts — so we’re told — and it’s not clear whether the bad guys will be able to successfully pull anything off before Nov. 8th. This is one area where government incompetence is actually a good thing.

Or perhaps they are relying on continued vote rigging to try to nullify the will of the people, but we suspect that this time around, it’s going to be a lot harder to cheat than it was in 2020.

Thus, Democrats are facing a political catastrophe that could lead to the end of their reign of tyranny across America. No doubt they will pull out all the stops to prevent this from taking place, even if it means launching nuclear weapons in Ukraine (to be blamed on Russia) and declaring a state of wartime martial law in America.

Pray for universal safety over the next three weeks, and pray that Democrats don’t start World War III just to try to rig an election.

Meanwhile, if you’re wondering where the next pandemic might come from, look no further than Boston University, which developed a new chimeric covid strain using gain-of-function research (which is illegal in the United States), achieving an 80% mortality rate in mice.

The BSL-3 laboratory that achieved this is situated in a high-population density area, meaning that if this gets out, it will immediately spread across the Boston population and the entire East Coast.

As the UK Daily Mail has covered in a follow-up article, a director of NIAID openly admits she wasn’t aware this gain-of-function research was taking place. This means Boston University scientists circumvented approval requirements, since they also state in their own paper that funding for their project came from NIH / NIAID. From the UK Daily Mail:

– Dr Emily Erbelding, a director at NIAID, said she was unaware of specific details of the research
– She claims to have only found out the experiments may have involved enhancing pathogens on Monday
– Grants totaling $1.1million from NIAID are listed as having helped fund the research at Boston University

Here’s the section in the PDF document that openly credits the NIAID and NIH for funding, which means Boston University violated US law and has been running a criminal science bioweapons operation… in other words, Boston University has “gone rogue” and all its scientists and administrators need to be immediately arrested and prosecuted. 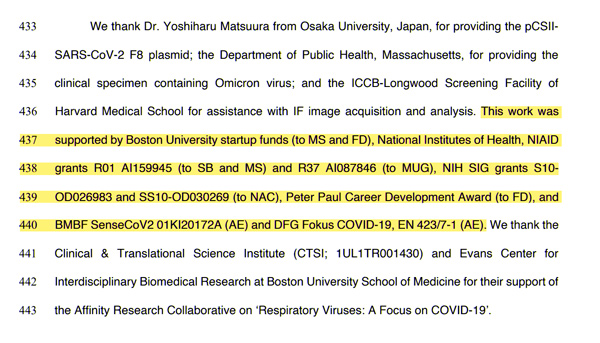 Get the full story on all this (and much more) in today’s hard-hitting Situation Update podcast:

– Another pathogen release is coming in 2022, with emergency lockdowns
– Huge layoffs will happen in 2023 across the U.S. tech sector
– US semiconductor companies getting hit hard by Biden’s economic order targeting China
– Barge river traffic problem in the USA won’t be solved in 2023
– There isn’t enough rail capacity to take over from the barges
– FOOD WILL ROT on the farms across the USA, with no means of transportation
– GPS signals jammed / blinded in Texas – is it China’s test run?
– Russia takes out NATO / Ukraine satellite comms station, blinding Ukraine
– NIAID director admits Boston University bioweapons research was NOT authorized
– Gain-of-Function bioweapon may be “accidentally” released in Boston
– EcoHealth Alliance bragged about huge grant funding to work with Boston University
– More signs point to imminent attack by Russia
– 2023 food scarcity will get FAR worse than what anyone saw in 2022
– Interview with Pastor Todd Coconato