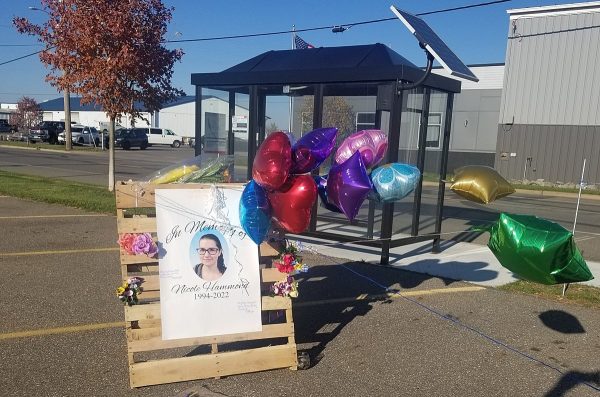 In an age where Emmett Till is still considered a hero, and the actions of his rapist father (Louis Till) are swept under the rug to ensure the arc of moral justice is always titled in favor of the Tills worldview, we remember to Say Her Name.

Because once you do… there’s no going back.

ST. CLOUD, Minn. (FOX 9) – A St. Cloud man has been charged with killing a co-worker who prosecutors say rejected his advances.

Michael Carpenter, 36, has been charged with second-degree murder for allegedly shooting a co-worker, 28-year-old Nicole Hammond, in the parking lot of their workplace on Lincoln Avenue Northeast in St. Cloud at 6:59 a.m. on October 24.

Prosecutors, citing cell phone records, say Carpenter was harassing his co-worker. Those who worked with the victim and the suspect told investigators they knew Carpenter had made several unwanted advances over the past month, but her employer says nothing was ever reported to management.

“Unfortunately, we had no idea,” said Hammond’s boss Rob Dubow. “Any time there is anything that requires our intervention we step in. But in this case we had no indication that there was anything awry.”

Dubow said Hammond was a great employee with an incredible attitude, and that everyone who met her loved her.

“Nicole always had a smile on her face, and anybody who had any association with her couldn’t help but like her.”

Witnesses told police they saw Carpenter shoot and kill Hammond Monday morning while she was getting out of her car outside their workplace.

A search of Hammond’s cell phone showed text messages to Carpenter in which she told him she didn’t want him to “touch her” or “manipulate her” and asked that he “not make things uncomfortable at work.”

In a post-Miranda interview, Carpenter admitted to arguing with the victim the night before the shooting. He also admitted to being at the scene at the time of the shooting but said he fled without calling authorities.

The complaint says a search of Carpenter’s car turned up a loaded 9mm handgun that matches the type of shell casings found next to the victim.

A white woman refused the advances of a black male, and paid for this action with her life.

This is the true legacy of Emmitt Till and his rapist father, Louis. The Till Effect.

Has a white male ever murdered a black woman for refusing his advances? Asking for a friend.