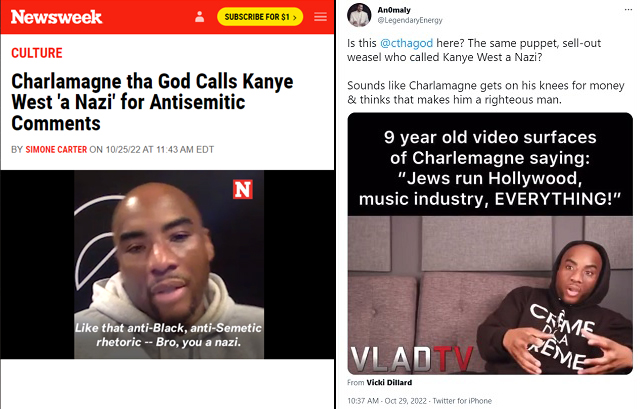 Charlamagne tha God attacked Kanye “Ye” West as “a Nazi” earlier this week over his comments about Jewish control of the media and music industry but newly surfaced video shows Charlamagne himself saying exactly the same thing.

Is this @cthagod here? The same puppet, sell-out weasel who called Kanye West a Nazi?

Sounds like Charlamagne gets on his knees for money & thinks that makes him a righteous man.
pic.twitter.com/pEiE0HgHl9

“You can’t speak bad about a Jewish person because they have organizations and they’re a close knit group of people in power, who will bring you down,” Charlamagne told VladTV in a buried interview 9 years ago. “They move as a unit.”

“You know why there’s not a lot of Jewish rappers? Because there’s Jewish owners and Jewish CEOs — they run these labels, they’re the bosses, that’s why!”

“What did Kanye say, he said uh, ‘Happy Kwanzaa to all the artists and happy Hanukkah to all the label execs,'” the interviewer said.

“It’s the truth!” Charlamagne exclaimed. “They run the business — period — from Hollywood to the music industry, everything!”

“It’s a very powerful mafia, as they should be,” he said.

BREAKING: Old clip resurfaces of Charlamagne Tha God 10 years ago on VLADTV agreeing with YE aka Kanye West regarding his opinions on jews. Charlamagne was just on the breakfast club recently condemning Kayne for his rants.

“I’ll be honest with you, I don’t even feel comfortable talking with you about this right now, I’m sweating right now, listen — there’s certain things I don’t like to talk about — I love Jewish people. They’re powerful. I don’t want them to misconstrue anything I’m saying or take anything I’m saying the wrong way, so I would much rather not even have this conversation,” he continued.

“I have a lot of great Jewish people in my corner,” Charlamagne said. “I have a Jewish conglomerate.”

Earlier this week, Charlamagne gave an interview to Newsweek where he attacked Ye as “a Nazi” who is on the side of “fascism” and “hate.”

“If you attack Black people and Jewish people in the span of a week then you are indeed a Nazi,” Charlamagne said.

“This is one of those times for me, it’s like [West] went too far,” he said. “Like the anti-Black, anti-Semitic rhetoric: Bro, you a Nazi … We already see fascism rising rapidly in this country, and you choose to be on the side of people spewing that kind of rhetoric, energizing that kind of hate?”

“He need to start really leaning into God, cause nothing he’s doing is of God. Nothing I’ve seen him do is of God,” Charlamagne said. “I hope that this is what helps him to go find some real healing because clearly he’s hurting. Right? And I just — I don’t see this ending well. I feel like he’s moving like a person who doesn’t feel like he’s gonna be here much longer. You know what I mean?”

Charlamagne also went to the media last week to praise Pete Davidson for having a “10-inch penis” and claim Ye was just jealous of him.

“My wife is out here f–king a white boy with a 10-inch penis, and you won’t help me? … You’re telling me that’s your friend, but you’re supposed to be culture?'” Charlamagne claimed Ye told him.

Davidson personally thanked Charlamagne as a “true friend” for praising his penis and defending him from Ye.

“It meant a lot for Charlamagne to have his back and he knows he is a true friend,” a source close to Davidson told Hollywood Life.

Ye has refused to back down from his criticism of powerful Jews and even shared a chart with the press on Friday night listing a host of Jewish businessmen who lead major media and social media outlets.