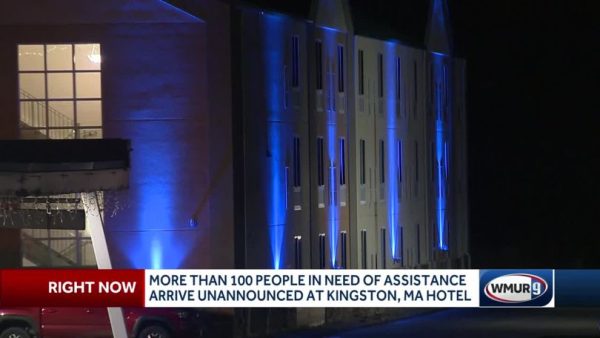 Let’s be blunt: the following story reads like the start of a horror story. A dystopian world of no hope, where one civilization has surrendered to another force for reasons completely unexplainable. [More than 100 people in need of food, shelter arrive unannounced in Massachusetts town, WCVB.com, October 27, 2022]:

KINGSTON, Mass. — The top official in Kingston says 107 people in need of assistance have arrived unannounced in the Massachusetts town within the past week.Kingston Town Administrator Keith Hickey said nine people arrived on Friday before 26 more arrived on Saturday and dozens of others kept coming.

Hickey said the 107 people are being put up in the Baymont by Wyndham hotel by the state, which gave town officials no warning that those people would be coming.

According to Hickey, there are 20 children among the 107 who will need to be schooled for as long as they are in Kingston, which could be through the end of the year or until the state can find permanent housing.

Hickey said he does not know where the people are from, only that they speak Creole and little to no English.

The town administrator also said the group’s immediate needs, such as food and shelter, are being provided for by the state, but that the rest of the work will fall on the town of Kingston.

“The town of Kingston is going to have to fund whatever support services are needed for those individuals while they’re attending school. We don’t know if those costs will be reimbursed to us by the state of Massachusetts,” Hickey said. “So I think the largest exposure, financially, to the town of Kingston is to our school department.”

Hickey said Kingston’s public health nurse has been to the Baymont by Wyndham to provide medical care and vaccinations for the dozens who recently arrived in town.

According to Hickey, he has been assured by the state that no more people will be relocated to Kingston.

According to Schiller, some of the families are new arrivals to Massachusetts from other countries, including Haiti and Venezuela. Others are families who have longer Massachusetts residency.

“The Department of Housing and Community Development has a process in place to provide emergency shelter and other assistance to eligible homeless families by placing them in scattered site apartments, congregate shelters, and, as a last resort, hotels and motels. Due to high demand in the shelter system, some families recently have been temporarily placed in hotels, including in Plymouth and in Kingston, while more permanent shelter or housing is found,” Schiller said in a statement.

Schiller said the Department of Housing and Community Development considers the location of most recent school enrollment for school-age children when placing families in the state’s Emergency Assistance system.

Plymouth Town Manager Derek Brindisi told NewsCenter 5 that up to 27 more families are expected to arrive in Plymouth over the next few days during a meeting with state officials regarding the families who are already in town.

Brindisi also said he has been talking with representatives of the state who said they secured 27 hotel rooms in Plymouth and have arranged for social services.

The state is expecting this to be a short term mission that is expected to end by Jan. 1, 2023, Brindisi said in the press conference.

According to Brindisi, the state officials he spoke with referred to the people brought to Plymouth as migrants, but also noted that some of them have already been in Massachusetts for a significant period of time.

There are tens of thousands of majority white communities across America in need of more than 100+ people black people to show up unannounced, speaking no English and from undisclosed nations.

This isn’t an invasion anymore, folks. Our nation is a buffet for the third world masses to enjoy, with no sneeze guard.